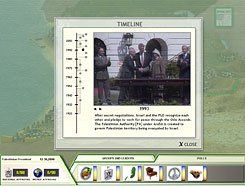 Social studies teachers Karl Atkins and Scott Deckelmann take on a very serious subject by giving their students a very amusing challenge: Win a computer game. In fact, students have to win PeaceMaker, a simulation of the Middle East peace process, twice -- once while playing as the Israeli prime minister and once as the Palestinian president.

In both cases, students must respond to a rapidly evolving political situation by choosing which actions -- building settlements, launching rockets, making speeches -- are most likely to broker peace. The Scappoose, Oregon, teachers have played PeaceMaker with more than a dozen sections of their freshman global-studies and junior international-relations classes, and they say gaming is an effective way to explore intricate political issues. Indeed, PeaceMaker is at the forefront of a movement -- often called serious games or social-issues games -- in which educators use games to illustrate complex social issues, from immigration to climate change.

"Games are largely misunderstood in our society. They aren't necessarily trivial or sophomoric. Gaming is just a young medium," says Suzanne Seggerman, president and cofounder of Games for Change, a resource and support clearingouse for game developers, nonprofit organizations, and educators. "They're a great way for people to explore serious issues."

Better yet, they make that exploration fun, even addicting, according to Scapoose sophomore Ashley Amick, who played PeaceMaker at school last year. "I never wanted to go to my next class, because I hadn't won yet, and I wanted to see what would happen when I did," she explains. "We usually learn from textbooks or worksheets, but because you automatically learn while you play it, even my classmates that don't like school had fun."

Social issues are by their nature complex and dynamic. Understanding them involves analyzing cause and effect, multiple viewpoints, and rapidly shifting scenarios. Games easily mirror this fluidity.

"The thing we get with games that is different from what we get with books or other media is that we are able to actually build models of relationships between the different moving parts of a system and let people mess around with them, let people experience what happens when they change one variable or when they introduce a different kind of behavior," says Ian Bogost, an associate professor of computational and digital media at the Georgia Institute of Technology. (Bogost is also an adviser to the Serious Games Summit at the annual Game Developers Conference, and he wrote the book Persuasive Games: The Expressive Power of Video Games.) 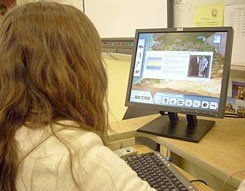 "Understanding something such as war or poverty or immigration demands understanding a whole range of different kinds of inputs and outputs," he adds. In other words, if you take an action in PeaceMaker, you'll soon find out what the other side thought of your input.

"It is very clearly active, not passive," says Deckelmann of the way his students use the game. "They are part of the game. They are helping determine the end of the story. They don't get to determine the end of a documentary. It's about them deciding what's important, as opposed to us telling them what is important. And it's allowing them to fail in a safe place where no one can shame them." Games teach almost entirely through trial and error, with few real-world consequences; if you mess up, you can always restart.

A big lesson students pick up from PeaceMaker, says Deckelmann, is that "being a leader isn't easy." It's not just having your finger on the button. Indeed, Amick says the game encourages flexible thinking and empathetic decision making. "Every decision you make will affect something, whether immediately or in the future," she says. "It helped me learn to think from different viewpoints, and not just my own. Whenever I picked what to do next, I had to think about the consequences it would have on both sides, or I might hurt one side and help the other, which wouldn't work out in the end."

You Are the Hero

When dealing with a complicated, heavy subject, it helps to frame the issue as a personal quest. This is the approach British game developer Red Redemption takes in two games addressing carbon emissions, Operation: Climate Control (for teens) and Climate Challenge (for older players).

"Climate change is an enormous subject that is often confusingly and misleadingly portrayed in the media," notes Hannah Rowlands, the company's scientific adviser. "Many people find the subject overwhelming and depressing, and they object to being preached at about what they should do about it. Our philosophy for Climate Challenge was to turn that around and present the difficulties as challenges." 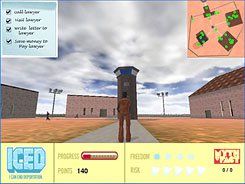 For example, in Climate Challenge, you run Europe, and you've got to rein in carbon emissions by picking energy policies that won't break the bank or earn you the boot from voters. Sure, you have to think about tax laws and import/export policies, but you also get to be president.

Computer games have a visceral you-are-there quality, which also helps lessons stick. "If you can empower players -- if you can emotionally touch them -- it affects them more," says Eric Brown, one of PeaceMaker's creators and CEO of game developer ImpactGames.

But the emotions games evoke don't always have to be positive ones. Last year, Breakthrough, a human rights nonprofit group, rolled out a game called ICED (I Can End Deportation), for teenagers and adults. The students role-play an immigrant teen trying to earn citizenship. Even players who attempt to avoid trouble with the law can be sent to an immigration detention center for minor infractions -- a possibility confronted by legal as well as illegal U.S. immigrants.

As a result, game play can feel arbitrary, frustrating, or even frightening; players sent to solitary confinement find themselves staring at a black screen. That's intentional. "We wanted to give the player a sense of the kind of constraints that immigrant youth have to live under," says Heidi Boisvert, Breathrough's multimedia manager and the lead developer for ICED. To make sure the game accurately reflected these concerns, 100 high school students -- many of them undocumented immigrants -- participated in the game's creation, helping come up with everything from the characters to the backdrop concepts.

The Power of Play

"Given the popularity of computer games, the potential reach of serious games is huge," says Red Redemption's Hannah Rowlands. "You can reach literally millions of people with them." Some go beyond education to prompt political action. The ICED Web site provides easy links for players who would like to sign the United Nations's Universal Declaration of Human Rights, for example. It's too early to say for sure whether such games motivate students to tackle social issues in real life, but there are indications that they may encourage student action.

As specimens of a newer medium, serious games face some serious challenges when it comes to fitting into schools. School districts don't always have cash for software, and teachers can be pressed for time and computer access. (Sound familiar? If you'd like to try serious games in class, but you lack the time to figure out just how to start, check out our tips for teaching with serious games, and find out more about the games mentioned here, and others.)

Although several games, such as ICED and Operation: Climate Control, include downloadable material for teachers, it's difficult for the games, in general, to meet curriculum standards in every state. But despite these growing pains, proponents of serious games often compare their fledgling industry with documentary film in its early years; it combined an entertainment medium with weighty topics, and today produces influential blockbusters such as An Inconvenient Truth.

After all, there's not a big difference between making an Al Gore lecture entertaining enough that people will shell out money to hear it on a Friday night and making learning about the Middle East peace process fun enough to keep Karl Atkins's class tuned in for an entire week. "If I spent that same week lecturing and giving them articles, for 14- and 15-year-olds," Atkins says, "that would be a brutal experience."

For more information about serious games,