Entrepreneurship in pre-collegiate schools is spreading like wildfire! In 2011, a venture capitalist parent and I decided to pilot an Intro to Entrepreneurship elective for our seventh and eighth graders at The Nueva School. We were stunned when 23 of the roughly 100 students in those grades signed up for the course. This past year, we actually had to turn away seven students who wanted to repeat the class. Clearly, we had hit a chord with today's youth.

In Nueva's Entrepreneurship Course, student teams are guided to create their own ventures. We encourage the students to imagine they are adults and "go big." Past teams have created ventures, such as emergency appendectomy kits for developing nations, soccer cleats that simulate barefoot running, and anti-procrastination homework solutions for students, to name but a few. They learn how to identify "pains" (needs), invent "delights" (solutions), collaborate, build a business model, create financials using Excel, write a business plan, and pitch their venture (either for profit or non-profit) to a panel of feedback-givers consisting of venture capitalists and social good backers.

Throughout the course, students utilize design thinking skills such as:

Guest speakers and young alums from industry and social organizations visit and lead seminar-like discussions and/or case studies with the students on topics such as: 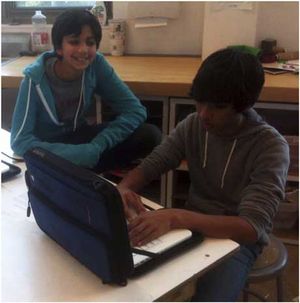 Students are supported as they wade into the real world, but not given the answers. In the end, they learn that they have the tools to deal with uncertainty and to translate ideas into real outcomes.

Many entrepreneurship experiences focus on having students make things, such as locker decorations or inexpensive jewelry, which is reminiscent of the factory approach of the past. The driving force in these programs is creating and selling the products to their fellow classmates. Students learn how much effort it takes to make products and how difficult it can be to get people to part with their money!

We decided on a different approach, which we thought would prepare the students for their futures as knowledge workers. We defined our approach as the ability to figure out what needs to be done, and then do it. With the Internet and social media, thinking big becomes a real possibility for all of us, including middle and high school students.

Second Decision: For Profit and For Good

From the beginning, we emphasized that entrepreneurship is about identifying needs and then creating a business model that works best for that market and the proposed goods or services. This is true whether the venture's objective is profit, social benefits or both.

Rather than separating the students into two groups, we decided to teach them all in one course, since many companies now have non-profit or social good divisions, and non-profits need the ability to identify ways to raise funds, foster strategic partnerships, etc. By having both options available to all students, engaging cross-pollination occurred, especially during discussions with guest speakers and during case studies.

The Key: Students as "Need Finders"

Frequently, both at school and at home, students are told what to do. Basically, the problem has already been framed for them. They have very few, if any, experiences in diving into new areas without a guide, and little opportunity to create their own roadmap, complete with dead ends. By giving students meaningful experiences as they wade into an area and/or problem, processes to identify underlying needs, and mindsets to have the courage and confidence to do, we give them critical skills that they will use in many areas for their entire lives.

Empathy as the Driver

Students interview potential users to identify what they truly need. By putting their own opinions aside, students develop great insight and motivation to meet the needs of the people they talk to.

One student learned from her sister that there were students in Africa who had no drinking water other than what they could hold in their hands. This became the motivation for her non-profit, Project 10, which sells water bottles and then ships the bottles to students in Africa.

Deep empathy leads to a strong curiosity about the problem area. Students interview more users to see how common the problem is and gather more first-person experiences and perspectives.

A pair of students became curious about how many students were losing clothing items at school. They created an online survey that asked their classmates how many items they lost and what the reaction was from their parents. This became the basis of their new venture.

Researching the area of need yields more paths that are followed with rigor. Students uncover solutions that are already out there and find out what is not working about them. Uncovering the assumptions, students press in on each one, seeing if it is valid, of if there is room for innovation.

Another team knew that procrastination and missed homework due dates were issues for their fellow students. To form their company, they did extensive interviews and then synthesized the information as a team, zeroing in on the deep underlying needs. This gave them a foundation to help them better function as a group.