Teaching our children is surely one of humanity's earliest and most fundamental pursuits, and today it's fair to say that education, not Esperanto, is the universal language. We educate for various reasons, of course, but at the most basic level, we teach our children lore, skills, beliefs, and a sense of their place in the scheme of things in order to perpetuate the family, the tribe, the nation, and finally -- though our teachings sometimes veer from the ideal or ignore the obvious -- the human race itself.

Education varies according to need, sometimes widely. What hunter-gatherers in the Amazon rain forest need their next generation to know is very different from what a child on Manhattan's Upper West Side is taught, but the unifying theme is that learning is crucial, whether the lesson is avoiding jaguars or looking both ways before crossing.

We in the United States have long been proud of our public education system, more often than not with good reason. The whole idea was born in this country, and considering the complexity and diversity of the institution, we've done well producing a literate and skilled population. The result is an economy that has been the envy of the world for the past half-century and a democracy that has survived some notable pratfalls.

But sometimes we have also been smug, assuming that we have little to learn from the way other countries do things. Now, however, a more competitive world is making us recognize that there are educational ideas everywhere worth studying. Some of these ideas -- the Montessori Method, the Waldorf concept of looping, Japan's rigorous standardized testing -- have already influenced stateside education, and just as the world has learned from us, so we will (and must) continue to learn from the world. November 13-17 is International Education Week. In the spirit of the day, we've created a sampling of highly focused stories on intriguing methods of education that occur far from our shores. Through them, we hope to shed light on the commonalities that bond all educators. 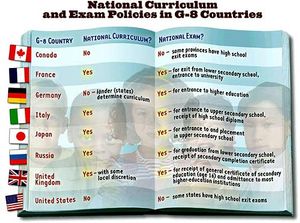