This blog post is an excerpt from Save Our Science: How To Inspire a New Generation of Scientists by Ainissa Ramirez (TED Books).

The 21st century requires a new kind of learner -- not someone who can simply churn out answers by rote, but a student who can think expansively and solve problems resourcefully. As a scientist and inventor, a longtime professor at Yale University, and a woman who has always been passionate about getting kids excited about science, I believe that the key to this goal is to improve science, technology, engineering and math (STEM) education. These disciplines are rooted in the kind of thinking that is now critical. One of the most important aspects of this shift is to fix the false presumption that girls are not as good as boys in science and math.

Even though girls and boys sit next to each other in class, only 26 percent of STEM bachelor's degrees go to women. By allowing and encouraging society's message to girls that they are bad at these subjects, we're drastically reducing the number of our potential doctors, engineers, designers and computer scientists. Given the growing importance of STEM in the global economy, failing to nurture girls in these disciplines is dangerous for our country.

The data also shows that the difference among graduates is not due to girls' ability to do math and science; instead, the gender gap is caused by attitudes and behaviors toward girls and women, especially in the classroom. Recently, the American Association of University Women spelled out the STEM ecosystem for girls in its report titled Why So Few? The data shows that the input of girls and boys who are interested in math and science is nearly the same. So the problem has everything to do with the type of encouragement girls receive. To begin solving this problem, girls need additional encouragement to bypass the cracks in this STEM pipeline.

The fallacy that girls can't do math and science, which has morphed into an accepted belief, begins with the negative messages they receive every day. When I was younger, I loved Barbie dolls, but my love came to a halt more recently when Mattel released a talking Barbie doll that said, "Math class is tough." Just a few years ago, I saw a girl's T-shirt that said, "Allergic to Algebra." As much as we want to protect them, our girls see these stereotypes beginning in elementary school.

This was not always the case. In the post-colonial days of the United States, there was a strong intention to educate girls in science and math. In her 2003 book The Science Education of American Girls, historian Kim Tolley examines the evolution of girls' scientific interests from the antebellum era through the 20th century. Jedidiah Morse's Geography Made Easy, first printed in 1784, was the premier science textbook of the time and is dedicated "to the Young Masters and Misses." (Morse later founded a school for girls.) At the small all-girl secondary schools that began in New England in the early 1800s, girls studied geography, English, arithmetic, needlework and the arts. Geography contained topics such as astronomy, geology and history.

In the late 19th century, the physical sciences were considered a worthwhile pursuit for girls to undertake. In 1890, 58 percent of girls took physics and algebra. An array of school course catalogs shows that a greater percentage of all-girl high schools offered more physics and chemistry classes. After 1900, however, the number of girls in the sciences took a nosedive, as John Francis Latimer wrote in the 1958 book What's Happened to Our High Schools. By 1955, that number dropped to less than two percent. 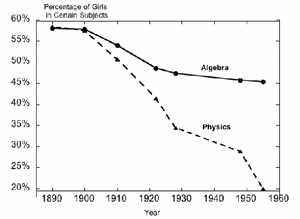 Several factors caused this decline. Secondary schools began to offer courses in classics to promote their status and to help prepare girls for college, since they were needed for admission. Unfortunately, this reduced the science offerings. In addition, schools started to emphasize vocational training like home economics, which put another nail in the coffin for girls' STEM access. Then, during World War II, the role of science changed as it began to be associated with making weapons and going into to battle. These cultural mindsets pushed girls away from science.

Today, we are slowly recovering from this decimation of girls in the sciences. Still, it is important to examine the messaging that rides alongside our efforts to rebuild. In the discussion of different learning styles between boys and girls, we must recognize that girls' choices might be linked to this old legacy of prejudice. (It is something to consider.) The reality is that girls can do science and math just as well as boys. In fact, the gender ability gap is now narrowing in the U.S.; and in Great Britain, girls have outperformed boys in "male" topics like math and economics. The relationship between girls and science has never been a question about their skill, but more a reflection of how society views them.

So, we are at a crossroads and must make a change. We need fun and engaging STEM everywhere, like 3D printers at coffeehouses. We need science role models to inspire the next generation. And, most importantly, we need STEM programs outside of school to motivate and encourage the next generation until we right this STEM boat again. We can do it; we've done it before with Sputnik. To make this change possible, all hands on deck are needed to save our science.