Maker Spaces, Fabrication Labs . . . it's been going on for some time now, but it's all the buzz in education these days. And with good reason.

I've been thinking about all this more and more since walking in on a session called "Digital Fabrication in K-12" at Educon this past January. One of the presenters that day, a fellow named Jaymes Dec, said, "I wish every classroom was a Maker Space."

Dec's comment resonated with me that day. I've felt the same way for years. I've seen a raft of evidence that "Maker" type spaces can provide a platform for otherwise compartmentalized academic subjects to collaborate.

That day at Educon, I decided to take a trip, talk with Dec and the see the Fab Lab he helped create at the Marymount School in New York City. I'm glad I did.

Makers at the Marymount School

Marymount is a private school in Manhattan, and that connotation of wealth can come with a perspective that a public school couldn't create a Maker program like the one Jaymes Dec has built up. Dec argues to the contrary. And he's right.

The best way to get into [the Maker Movement] is to model how we want our students to learn and build it up. If you're interested in this stuff, just dive in and start with a simple project. Kits are a great and inexpensive way to start to build. Find something that's scaffolded, like on Instructables.com or makeprojects.com. Dive into a kit project first as a pilot. Very often I'll still start kids on learning projects with kits. Here's the kit, here are the instructions, go ahead and put it together. It's very empowering. It shows kids, "Hey, I can make something like a circuit board." Soldering especially, I've found, kids love it. It's a great skill to learn and it opens the door to many of these projects. I've taught kids as young as six years old how to solder.

I'm still learning this stuff and figuring it out. I use what knowledge I do have to help kids learn to find the answers they need. I'm only a second-year teacher, too. I have a lot to learn. I've found that I love working with kids on this stuff, and am ready to learn. I keep focusing on getting better.

As part of that learning curve, Dec has tried some over ambitious projects.

I've tried to introduce Arduino right away and personally found that to be difficult. I wasn't ready. I've realized the last two years that I have to start out younger and build them up with simple micro controllers. We've been using the Lego WeDo in elementary classes now, too, and it's been going very well. The Pico Cricket, LilyPad and Makey Makey boards are great places to start, too. The trick, of course, is you have to start somewhere.

But who can you learn from? Where do you start?

Mentors and Resources are Everywhere

When I asked Dec who his mentors were, who he seeks help from when he's learning to teach, he said, "I've learned as much from Gary Stager as anyone else. Gary's been at this for a long time.” Dec said he attended Stager's Maker conference called Constructing Modern Knowledge (CMK), held in Manchester, New Hampshire every summer since 2008. Dec also mentioned a new book by Stager and Sylvia Martinez called Invent to Learn (with a great resource page on the site), describing it as "a super practical way to get started in the Maker Movement." I also attended CMK a couple of years ago and found it to be, as Stager called it, a "resource-palooza."

Some other ideas include:

For a list of Dec's Maker resources, visit his blog and also the Google Group for K-12 Makers. Stager's many resources are on the web as well.

Credit: Adam Provost, 2013
Marymount 7th graders designed a light kit to be an educational project for a community center in Zimbabwe. 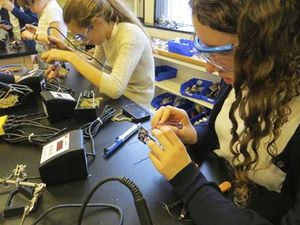 Credit: Adam Provost, 2013
Marymount 7th graders designed a light kit to be an educational project for a community center in Zimbabwe.

Over his few years at Marymount, it's evident that Jaymes Dec has certainly gained some experience. I got to sit in on one of his seventh grade classes, and it was impressive to say the least. Here's the context for what I observed:

The seventh grade class is wrapping up a year-long service project. Every year the seventh grade does a service project for an orphanage in Zimbabwe started by The Religious of the Sacred Heart of Mary. Usually the project has involved raising money somehow. This year we wanted to do something more tangible. We reached out to the nuns and asked what are the issues that kids and the community are facing? What can we help with? The Sisters identified three things:

We examined those problems and felt that the first two needed extensive resources and fundraising. The light thing (in the community center) was something we could possibly tackle. I asked the students to research DIY solutions to Third World problems. I wanted them to discover innovative solutions out there that people were working on. One of the projects that a few students stumbled on was a called a "Sun Jar." If you look at a Sun Jar project on Instructables, the first step is to buy a solar powered lamp, disassemble it and put it inside a glass jar. We thought we could make our own instead. We could design and make that circuit here and assemble it.

We spent all year long prototyping (breadboarding) different solar powered circuits. In the end, we've got one that works really well. It's very efficient. Once we had one that worked well, we designed the circuit in Fritzing, then sent the design to a circuit board manufacturer in Oregon. For about three bucks a pop, we've got our board. Today in class we're assembling these devices and will take pictures of the process to document it. We'll compile these pictures into a set of instructions. Then we'll send these kits to Zimbabwe with the tools to build the circuits themselves rather than just ship the finished product. We see this as a longer-term solution -- an educational project. I hope that we can continue this.

Now, if you have no experience in the Maker Movement or digital fabrication, that can all sound pretty intimidating. The project shows the potential of what’s possible in learning spaces like this -- the merging of math, engineering, critical and design thinking, fabrication, job aids and the creation of documentation, design aesthetics . . . just to name a few.

Again, as Dec said, "You have to start somewhere. There are so many people out there to help when you have problems or need advice. Start small and keep building."

Through my conversations with Dec, one thing became increasingly clear: Maker Spaces like the one at Marymount create bridges between traditionally compartmentalized subjects. He explained how some of the science classes were now using the Fab Lab, as were many art classes. Dec himself will be teaching fewer classes next year and working to integrate the Lab into other curricular areas. It's a movement I've seen in many places where multidisciplinary projects are beginning to tear down barriers between traditionally compartmentalized subjects.

The motion in the Lab also raises many questions about school scheduling. Dec meets with some classes only once per week. "Time can disappear when kids are making things," he said. He described how he'd love to have more time built into the schedule and meet with kids more regularly. These are some great challenges for Marymount and many other schools to address as these successful new programs grow.

Dec explained that the school has purchased a new site across the street in Manhattan and new building plans are underway. Seeing the potential that the Fab Lab has brought to education, Dec had a gleam in his eye as he explained, "One whole floor of the new building could become a large Fabrication Lab. I wish there were a quicker timeline. I'd love to move into the new building this fall."

But this teacher is as humble as he is eager and inventive.

Almost everyday I make mistakes, but every day I do something right, too. As long as I take time to reflect, I can become a better teacher every year. That's one of the reasons I love this job. Marymount has been so supportive of these efforts. It's certainly raising some eyebrows with more traditional teachers. It's great to look at what this Fab Lab makes possible in the school.

What could a Maker Space at your school conjure up? Exploring new ground, especially with students, is the key.

I’d love to hear your comments and questions on the article. Just leave a comment below. Also, any recommendations on schools to visit are greatly appreciated.

Up next, I’ll get back to telling you about the trip I took to High Tech High in San Diego, California.