© Madde Gnauck
U.S. school bus circa 1912: Buses have come a long way since then. 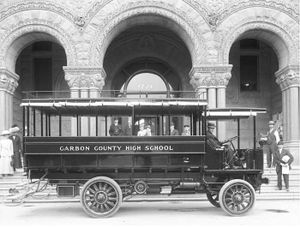 Bright yellow school buses—recognizable anywhere—transport more than 26 million children to school every day. But these days, districts and organizations throughout the country are using buses for much more than a ride to school.

By repurposing available space and capitalizing on mobility, these traveling art studios, cafeterias, and science labs are reducing barriers to access and meeting students where they are.

Here’s a sampling of some of the most innovative buses and the stories behind their creations. 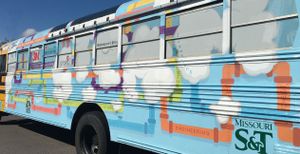 Makerspaces—equal parts woodshop, science lab, and art room—have been popping up in schools across the country for the past decade, providing educators with a place to pique student interest and build the skills needed for the jobs of the future.

The Columbia Public Schools (CPS) district had installed makerspaces in nearly half of its elementary schools when administrators realized they should ensure that all of their students had equal access. The solution: In 2015, the district introduced a makerspace bus, called the STEAM—science, technology, engineering, arts, and math—bus.

The colorful bus—which the district received as a donation and then painted sky blue—features a variety of tools, such as 3D printers, virtual reality glasses, and littleBits, a type of electronic building block. The bus can hold 25 kids at a time and has served about 5,000 students at the district’s elementary and middle schools, as well as in neighboring districts in the county. 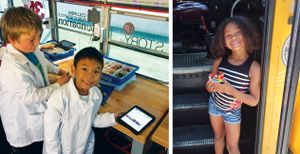 Onboard lessons are tailored to what students are learning in the classroom. When fourth-grade students at one school were studying the amplitude and frequency of waves, they created sound waves on the bus using littleBits. Craig Adams, CPS’s STEAM coordinator, helped second graders studying a unit on poetry write code for robots to act out the poems they had written.

“It’s a 15-foot field trip where kids can create and explore. There’s not a day that goes by on the bus that you don’t see total engagement from the kids,” said Adams, who also drives the bus. “Anybody can do this. It’s cheap and cost effective for districts.”

He would know. A number of other Missouri school districts are following Columbia’s lead—with Adams’s guidance, Liberty School District is building a STEAM bus. And in Maryland, Baltimore County Public Schools elementary students learn about robotics, computer programming, coding, and circuitry on the Mobile Innovation Lab, which travels to schools for a week at a time. 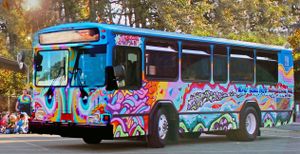 Motivated by the bookmobile concept—and by budget cuts to arts education at his daughter’s district in the 1980s—park supervisor Dale Weigandt thought, “Why not art on a bus?”

For the next 30 years, Weigandt periodically called his local transit operator in Eugene, Oregon, to see if there were any decommissioned buses they could donate. Decades later, in 2015, his long-delayed dream finally came true.

But the donated bus still needed to be transformed into an art space. In the end, a partnership between the parks and rec department and Imagination International, a company that brings free arts education to young people in Oregon, resulted in the creation of the River Road Park Imagination Bus, now known to everyone as Artie. Staff artists provide free classes for kids who don’t have the transportation or means to pay for art classes otherwise. 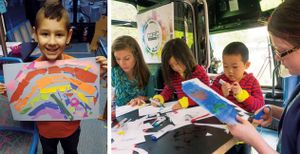 “Some of these kids don’t have access to adults that can make a difference in their lives,” said Cathy Casalegno, recreation director for the parks and rec department. “Even if you only serve three or four kids, it’s not about numbers. It’s about what each child is receiving.”

In the summer, Artie travels to 10 local parks on weekdays—two per day—and provides free art classes to dozens of students.

The parks and rec department also partners with the STELLAR Project, a federally funded arts and literacy program that serves four low-income school districts in the county. The bus travels to each district on eight- to 10-week rotations, and after school, it pays a visit to low-income housing areas. 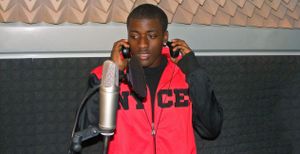 Artie isn’t alone. In Charleston, South Carolina, the nonprofit Carolina Studios is bringing arts enrichment to low-income students through its mobile music recording studio, which provides local youths with a safe space to explore music while learning the relevant technical skills to produce it. 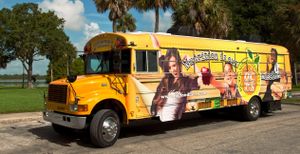 With seven in 10 students on free and reduced price lunch in Orange County Public Schools (OCPS), making sure kids eat is a year-round initiative in the district.

Worried that some students wouldn’t receive proper nutrition over the summer, the district launched a cafeteria bus in 2014 that travels throughout Orlando and serves over 1 million meals during the summer break.

Four libraries, 15 churches, and 20 recreational centers work with the district to provide activities, while the bus supplies meals funded by the U.S. Department of Agriculture. Serving food at community sites and activities has had a welcome side effect—youth participation in existing initiatives, like summer reading programs at local libraries, has increased. 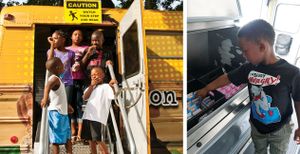 “We look for community partners that will open their event space to children because otherwise they’re stuck at home, or even worse, they’re in a hotel,” says Lora Gilbert, the head of food and nutrition services at OCPS.

The district also repurposed an old golf cart—adding coolers, heaters, and ice bags—to bring dinner to students at high poverty schools who participate in after-school activities that may be spread out over a large campus.

Other states have also launched mobile summer food programs. In addition to providing breakfast and lunch at schools during the summer, Jefferson County Public Schools in Louisville, Kentucky, sends buses to mobile home parks and housing communities at lunchtime to accommodate students who can’t come to the schools. And in the Mobile County Public School System in Alabama, food buses and food vans visit schools on summer weekdays, serving about 90,000 meals. 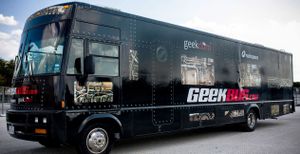 Mark Barnett was in seventh grade when his science teacher asked him to do a hands-on project on wildflowers. It was the first time he had enjoyed school.

Twelve years later, Barnett, by then a middle school science teacher in Texas, wanted to provide that same excitement to other children. He started a robotics club at his school, helped other districts adopt STEM education (that’s STEAM minus the arts), and later created a pop-up makerspace in downtown San Antonio.

Then true inspiration struck: Using leftover equipment from the makerspace and a newly donated RV, Barnett created the Geekbus, a 40-foot mobile STEM learning lab equipped with tools like buildable Lego robots, wind turbine kits, and Arduinos—tiny programmable computers that can be used in building clocks, keypad locks, and robots. 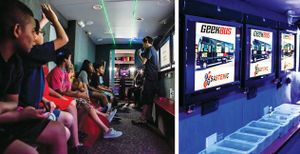 With support from SASTEMIC, a local nonprofit, the bus launched in 2014, traveling to underserved and rural schools around greater San Antonio that don’t have access to STEM and maker resources.

“Technology can be the big equalizer for students who’ve never had access before,” said Barnett, who wants all kids to have the opportunity to pursue STEM careers. “Access to the internet and knowledge on how to use computers levels the playing field.” 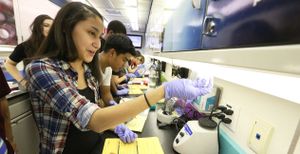 Last year, the Geekbus served 15,000 students and has already reached more than half of that number in the first quarter of 2017. Meanwhile, SASTEMIC has plans to create a second Geekbus and is consulting with organizations in Salt Lake City, New York City, and Las Vegas that are interested in creating their own versions of the Geekbus.

Elementary kids wave when they see the Bozone Ozone Bus (BOB) around town. In Bozeman, Montana, an agricultural city of 40,000 people, BOB has become an everyday part of the community.

What started as a high school student’s idea to create a greenhouse for a retirement home in Bozeman evolved into a mobile classroom that visits local elementary schools that want gardens but can’t afford them.

It took two years, roughly $25,000, and over 200 local partners to bring BOB to life in 2010. Seat frames were turned into plant tables, the roof was transformed to let in more light, and herbs and vegetables were planted throughout. 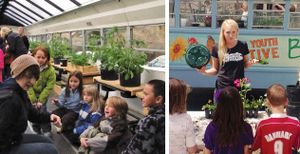 Gallatin Valley Farm to School, a local nonprofit that teaches kids about growing food and healthy eating, now runs BOB, and plans to extend its reach throughout the district, as well as incorporate math and English into the existing garden lessons.

“Not all the schools are able to have gardens, so we saw BOB as this really unique way to bring gardens to all of the students,” explained Erin Jackson, education director at Gallatin Valley Farm to School. “We try to show that farm-to-school education can be a lens through which to teach the core subjects.”

BOB isn’t the only garden bus driving around: The Green Urban Lunch Box in Salt Lake City hosts summer camps on a bus to teach K–3 students about plant biology and healthy eating, in partnership with the University of Utah and the local YMCA.

These traveling art studios, science labs, and greenhouses are reducing barriers to access by meeting students where they are.