In the 1950s, psychologists Jacob Kounin and Paul Gump discovered a curious side effect of discipline: If a student was being disruptive and the teacher responded with strict disciplinary measures, the student might stop—but other students would start exhibiting the same misbehavior. Kounin and Gump called this the “ripple effect,” and it demonstrated that efforts to control a classroom can backfire.

“The teacher who is interested in controlling ripple effects can generally do so best by giving clear instructions to the child rather than by exerting pressure on him,” Kounin and Gump wrote.

Decades later, classroom management is still a thorny issue for teachers. Nearly half of new teachers report that they feel “not at all prepared” or “only somewhat prepared” to handle disruptive students, in part because the average teacher training program devotes just eight hours to the topic, according to a 2014 report from the National Council on Teacher Quality. This lack of training comes with a cost, as teachers report losing 144 minutes of instructional time on average to behavioral disruptions every week, which comes out to roughly three weeks over the course of a year.

Instead of handling disruptions after they’ve happened, it can be more effective to set up conditions in which they are less likely to occur. Here are eight classroom strategies that teachers have shared with Edutopia, all backed by research.

1. Greet students at the door: At Van Ness Elementary School in Washington, DC, Falon Turner starts the day by giving each of her students a high-five, handshake, or hug. “During that time, I’m just trying to connect with them…. It’s kind of like a pulse check to see where they are,” she says.

In a study published last year, greeting students at the door helped teachers set a positive tone for the rest of the day, boosting academic engagement by 20 percentage points while reducing disruptive behavior by 9 percentage points—adding roughly an hour of engagement over the course of the school day.

2. Establish, maintain, and restore relationships: Building relationships with students through strategies like greeting them at the door is a good start. It’s also necessary to maintain them over the course of the school year, and to repair them when conflicts arise. “The stronger the relationship and the better we understand our students, the more knowledge and goodwill we have to draw on when the going gets tough,” writes Marieke van Woerkom, a restorative practices coach at the Morningside Center for Teaching Social Responsibility in New York.

Strategies for establishing, maintaining, and restoring relationships—such as regular check-ins, and focusing on solutions instead of problems—can reduce disruptions by up to 75 percent.

3. Use reminders and cues: “Novelty—such as the sound of a wind chime or rain stick—captures young students’ attention” writes Todd Finley, a former English teacher and current professor of English education, who suggests using these techniques to quiet a noisy class.

For older students, give plenty of warning if you need them to follow instructions. Reminders and cues are helpful ways to encourage students to follow instructions without being overtly controlling or forceful. For example, if you can anticipate a disruption—such as students getting out of their seats if they finish an assignment early—give a short reminder of what they should do instead.

4. Optimize classroom seating: When students choose their own seats, they’re three times more likely to be disruptive than when seats are assigned. After all, they’ll probably pick seats next to their friends and spend more time chatting. 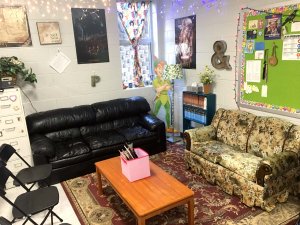 But that doesn’t mean choice is always bad. Giving students a sense of ownership in the room, paired with clear expectations for behavior, can have surprisingly positive effects. A welcoming space can reduce anxiety and boost academic performance. Emily Polak, a ninth-grade teacher in Madison, Alabama, gave her room a cozier feel by adding a couch, a loveseat, rugs, a coffee table, and posters. Her students decide where to sit—but if they can’t get their work done, they get moved back to a desk. “Discipline issues have significantly decreased. My students seem to feel more relaxed and more motivated in a setting that honors their choices,” Polak says.

5. Give behavior-specific praise: It may seem counterintuitive, but acknowledging positive behavior and ignoring low-level disruptions can be more effective than punishing or disciplining students. Instead of focusing on specific students, offer praise for the behavior you want to reinforce. For example, tell students, “Excellent work getting to your seats quickly.”

It’s also helpful to avoid using the word don’t, suggests Alyssa Nucaro, a sixth-grade English teacher in Memphis. Students are more likely to listen to instructions that include clear reasons.

6. Set clear expectations: Instead of just displaying rules for behavior, have a discussion with your students about why those rules matter. Bobby Shaddox, a seventh-grade social studies teacher in Portland, Maine, works with his students to create a list of norms—words such as inclusive, focused, and considerate—to build a sense of community. “It helps us own the behavior in the classroom,” Shaddox says. “Instead of a top-down list of rules that a teacher gives a class, these are words that we generated together. These are words that we believe in.”

7. Actively supervise: “Presence is crucial to maintaining classroom management and to effective delivery of instruction, and it’s a skill we can develop with effort,” explains Sol Henik, a high school teacher in Pleasant Hill, California. Although it’s tempting to sit at your desk and grade papers, that’s also an invitation to your students to get distracted. Be active: Move around the room, check in on student progress, and ask questions. It’s not about policing your students, but about interacting with them.

A 2017 study found that a teacher’s nonverbal cues—such as smiling and making eye contact—can “reduce physical and/or psychological distance” with their students, boosting students’ positive feelings toward the teacher and the course material while improving behavior.

8. Be consistent in applying rules: Early in Kelly Wickham Hurst’s career as an administrator in a public high school, she was asked to discipline a black student for violating the school dress code by wearing sagging jeans. As they walked down the hallway, he pointed out other boys—all white—who were also wearing sagging pants. “Are you gonna get him, too, or is it just me?” he asked. School and classroom expectations, rules, and routines should be followed and applied fairly to all students. Don’t single out certain students—it’s the behavior you should be focused on, not the student. Correct errors when you see them and provide additional instruction or reteaching when misbehavior occurs.