Science, technology, engineering, and math (STEM) specialty schools have existed in the United States for over 100 years, fueled in the 1950s by the Cold War space race and recently reinvigorated by concern over U.S. students’ modest performance in math and science as compared to their international peers (Means et al., 2008). This is troubling because, according to the National Research Council (2011), “more than half of the tremendous growth to per capita income in the 20th century can be accounted for by U.S. advances in science and technology.” In addition, businesses in the United States have voiced concern over the supply and availability of STEM workers and experts are concerned that the demand for STEM labor will only increase with time (U.S. Department of Commerce, 2011, 2012). Thus, the primary goal of the STEM school movement is to promote a future STEM workforce and maintain the U.S. position as a leader in innovation. There is also the need for citizens and consumers to be informed and engaged in everyday decisions that involve scientific arguments -- from policy debates that will have consequences for their health and safety to the products they consume and lifestyle choices they make.

One STEM school that is helping its students develop an array of skills to succeed in college and the workforce is MC2 STEM High School (MC2 STEM) in Cleveland, Ohio. Cleveland Metropolitan School District is one of the most economically disadvantaged school districts in the nation, with a free or reduced-price lunch rate of 100 percent. In 2011, just six out of ten students from the school district graduated high school on time. But at MC2 STEM, which opened its doors in 2008, 95 percent of the first class graduated high school within four years. Students who have attended MC2 STEM have not only graduated high school, they have also achieved the school’s requirements for mastery of every state standard. An integration of several research-based practices helps to promote student success and a caring environment at this small school: 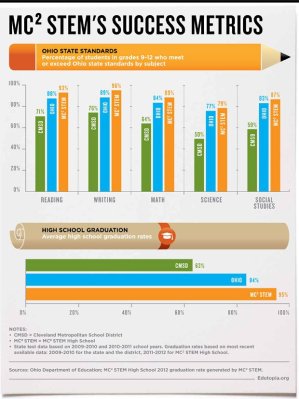 Preliminary research on successful STEM schools indicates that cultivating partnerships with industry, higher education, nonprofits, museums, and research centers is important for engaging students in STEM learning through internships, mentorships, interdisciplinary project-based learning, and early college experiences (Means, 2008; National Research Council, 2011). MC2 STEM is part of the Ohio STEM Learning Network, a network of ten STEM schools, developed with support from the Bill and Melinda Gates Foundation and in collaboration with the State of Ohio and various other partners. The Ohio STEM Learning Network is designed around five common principles. As a part of this network, MC2 STEM is an inclusive STEM school that accepts students via lottery, as opposed to competitive selection, and is committed to the idea that STEM talent is something that can be developed, rather than something innate that must be identified (Means, 2008).

PBL is the biggest component at MC2 STEM and is perhaps even more engaging to students because of its interdisciplinary content. Interdisciplinary curricula have been shown by several studies to support students’ engagement and learning (Taylor and Parsons, 2011), and specifically integrating science with reading comprehension and writing lessons has been shown by several studies to improve students’ understanding in both science and English language arts (Pearson, Moje, and Greenleaf, 2010).

MC2 STEM's transdisciplinary capstone projects blend science, English language arts, social studies, fine arts, engineering, and math, and are designed to transcend in-school and out-of-school environments. Their projects more closely resemble the tasks and ambiguities inherent in real life and help to make schoolwork more relevant to students’ lives, as well as more transparently linked to the skills needed to succeed in the working world. For example, in the “Bridges" capstone (PDF), students learn about the mathematical and engineering concepts necessary to construct bridges, as well as the symbolic meaning of bridges in literature, history, and social studies.

In accord with the recommendations of PBL scholars and practitioners, capstone projects at MC2 STEM are designed by starting with the learning objectives -- in this case, the Common Core standards (e.g., Wiggins and McTighe, 2005; Buck Institute for Education, 2012). Instructors of different subjects work together to think of a larger thematic concept that covers the state standards, and then they break down the larger thematic concept into units that address each state standard. (See a process model and planning activities for designing these types of transdisciplinary projects.)

In addition to the Common Core state standards, career-readiness standards for engineering and technology are also incorporated into several of the capstone projects at MC2 STEM. For example, all students complete a Sophomore General Electric Project (PDF), which is designed with GE Lighting employees to address current industry needs. According to Principal Jeffrey McClellan, if instructors are having difficulty coming up with a unit for a particular benchmark, industry partners have been helpful in brainstorming and explaining how particular state standards are used in their work, which results in more realistic capstone units.

(See our Resources and Downloads for PBL design documents and other resources from MC2 STEM for transdisciplinary PBL.)

Challenging Goals with Multiple Opportunities to Show and Develop Learning

The combination of high expectations and adequate supports has been shown by several meta-analyses to be one of the most impactful strategies for improving academic achievement (Hattie, 2009). In order for challenging goals to be effective, Hattie (2011) asserts that they must be presented in a situation that is structured so that students can achieve them, students must be committed to them, and students must receive frequent feedback so they can direct and evaluate their actions accordingly. (See a flow chart of the multiple opportunities that MC2 STEM students have for mastering benchmarks.)

MC2 STEM is a challenging learning environment that holds high expectations for all students, while also providing multiple forms of support for students to show and develop learning. The MC2 STEM graduation requirements state that in order to earn high school credit, students must achieve mastery (PDF) (greater than or equal to 90 percent in grades 9 and 10, and greater than or equal to 70 percent in grades 11 and 12) on each and every state standard. In addition, students must participate in 60 hours of community and/or STEM service and complete a GE sophomore project as well as a senior project in which they address an original research question.

About half of MC2 STEM students fulfill all mastery requirements in the first three years. If a student doesn’t master a benchmark during a specific capstone, they are not required to retake that course. Instead, the missing benchmark is noted on their grade-card and teachers work with the student to integrate those benchmarks into subsequent capstones. (The digital grade-cards (PDF) provide a real-time picture of student progress toward mastery, and the school uses the 21st Century Partnership for STEM Education’s online grade-card system, which is a proficiency-based assessment that gives access to the school’s parents and teachers.) About 40 percent of the state standards are assessed through capstone projects, and the rest of the standards are assessed through more traditional in-class methods such as quizzes and presentations. During most classes, students work in groups based on the particular benchmark activities or assessments that they are mastering, while the teacher and tutors walk around and provide assistance.

Ohio’s Credit Flexibility Plan has played an important role in redesigning the high school experience at MC2 STEM to enable in-depth learning. Schools that adopt the program can award high school course credit for fulfilling the state’s learning objectives as an alternative to seat-time. (Read more about the policy.) Credit Flexibility supports the Post Secondary Enrollment Option Program provided by MC2 STEM, which allows students to earn college and high school credits simultaneously. Students also earn high school credit for internship experiences and typically up to two years of early college credit. Principal McClellan has a refrain at MC2 STEM that reinforces high expectations, rather than the time students spend to achieve them: “Time is the variable. Knowledge is the constant.”

Students also participate in many extended-learning activities to support their learning, including summer learning at Case Western Reserve University and tutoring and mentorship programs. Students in grade nine meet with NASA employees four school days a year at NASA Glenn Research Center, and about one-third of freshmen work with NASA tutors after school for one hour, once or twice per week. Throughout the time they are working with the school, NASA tutors work with the same students so relationships can develop. Similarly, in grade ten, GE employees tutor students once or twice per week during lunch, and each tutor works with the same student for the entire time they are in the tutoring program. In addition, all sophomores spend two lunch periods per month with a GE mentor. Students report feeling cared about and supported at the school at a level that is above the district’s average, according to the district’s 2010 Conditions for Learning Survey.

The dropout-prevention research has also emphasized that “close mentoring and monitoring of students” is critical (Fairfax County Public Schools, 2011). According to McClellan, more often than not, simply asking a student why they haven’t been meeting expectations is the first step toward addressing the issue that is holding them back. MC2 STEM is a small learning environment with approximately 300 students; however, the school’s design also incorporates frequent feedback into the curriculum and successfully increases its capacity for tutoring and mentoring through community partnerships with NASA, GE, and the Jewish Federation of Cleveland, as well as with interns and UTeach candidates from Cleveland State University. As described below, community partnerships also help to provide students with feedback from diverse stakeholders through internships and service-learning.

Project-based learning helps to connect schoolwork with the work of professionals, and these connections are made further transparent through professional mentoring as well as internship and service-learning experiences. As MC2 STEM students demonstrate mastery of state requirements, they earn the opportunity to participate in paid and unpaid internships (PDF) for high school credit. The principal determines internship readiness, with input from the guidance counselor and professional partners where appropriate. The potential employer interviews the student and decides if the student is hired for their internship. Currently over 50 percent of seniors and 40 percent of juniors are participating in paid internships, and about 90 percent of the class of 2012 participated in an internship prior to graduation. In addition to internships, all students are required to complete 40 hours of community service.

Research supports the potential benefits of internships or apprenticeships and community service for academic achievement and student engagement when these experiences are closely connected with curricular objectives (Bell, Blair, Crawford, and Lederman, 2003; Billig, 2007). Rigorous studies from the career-academy literature have also shown that integrating academic and work experiences can have positive impacts on students’ later earnings. Graduates of career-themed high schools that emphasized the connection between school and getting a good job earned 11 percent more per year, on average, than graduates of traditional high schools eight years after graduating (Stern et al., 2010). Similarly, the dropout-prevention literature emphasizes the importance of making school relevant to students’ lives and making sure that school is engaging and challenging. In a 2006 survey of students who dropped out of high school, 81 percent said that if schools provided opportunities for real-world learning, including internships and service-learning, it would have improved their chances of graduating high school (Bridgeland, Dilulio, and Morison, 2006). The study also found that clarifying the links between school and getting a job may convince more students to stay in school (Bridgeland et al., 2006).

U.S. Department of Commerce. (2012). The Competitiveness and Innovative Capacity of the United States.

Yazzie-Mintz, E. (2010). Charting the Path from Engagement to Achievement: A Report on the 2009 High School Survey of Student Engagement.

What do you think about this Schools That Work story? We'd love to hear from you!
Tweet your answer to @edutopia, comment below, or email us.