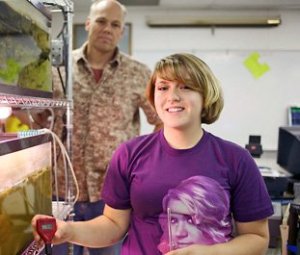 Ninth grade was a bad year for Reanna Garnsey, as it is for many students. Several studies (download) have found that more high school students fail ninth grade than any other grade; in low-income high schools, 40 percent of all dropouts (download) leave after ninth grade.

Reanna’s family life was in such turmoil during her freshman year that she tears up just thinking about it. She cut school a lot, missing half the year. Her GPA was just 0.8 out of a possible 4.0.

When she heard that teacher Eric Johnson was starting a Green Energy Technology Academy (GETA) at Laguna Creek High, she was curious. "I signed up and fell in love with it," says Reanna. She still cut classes, just not as many. "I'd wake up around noon and then go to Mr. Johnson's class." Eventually, she says, "I started going to my third and fourth period classes, working my way up to first period."

She learned how to build wind turbines and solar-powered go-karts, and she made biofuel out of algae. She raised her GPA to a perfect 4.0. In April 2009, California State Senator Darrell Steinberg asked Reanna to testify before a senate committee on behalf of a bill that would fund more career academies like GETA that prepare students for green jobs. "I gave a speech about my life and my story, and every time I told them about my GPA, the audience gasped," recounts Reanna with a laugh.