Want to rap a math concept for your class, but not sure where to start? Alex Kajitani, the Rappin' Mathematician, breaks down how to write a rap.

What do you want your students to learn? Successful math raps have been written on concepts such as fractions, negative and positive numbers, and integers.

Write out all the key words related to your concept. For a rap about the order of operations, Kajitani lists operations, order, parenthesis, exponent, multiply, divide, add, and subtract.

Then find what rhymes with these words. Kajitani recommends going to Rhymezone.com and plugging in your word: "Divide" brings up 400 results. He chooses the rhyming word guide.

Not every word needs to rhyme perfectly. Kajitani also uses words and phrases that sound similar, such as exponent and "own it," to form a rhyme. If you are writing a four-line rhyme, the second and fourth lines should rhyme.

A catchy hook -- a rhyme repeated at the beginning, middle, and end of the rap, like a refrain -- is essential to a good math rap. It quickly explains what the rap is all about.

Using the rhyme he found on Rhymezone.com, Kajitani shows how to craft a hook that explains the order of operations:

Parenthesis then exponents,
Multiply and divide,
Then add and subtract
PEMDAS is your guide.

Step 4: Back It up with a Beat

No rap is complete without the musical beat behind the words. A Google search for "free rap beats" could provide some leads. Garage Band, a Macintosh app that you can download for under five dollars, can also be used to create rap beats. Kajitani will buy beats for about $20-$100 per song to use commercially from sites such as Gotchanoddin.com.

Kajitani suggests sampling some background music and practicing lyrics to different songs until you find a combination that feels right. Any music software will allow you to shorten the beat's track -- Kajitani notes that a math rap doesn't have to be long -- to fit the length of your math rap. (One option is the free, cross-platform Audacity Sound Editor.)

Kajitani says you might start a math lesson with your new rap. Or you may want to record your voice into a computer and bring a recorded version into class. (Garage Band can also be used for this type of recording.) Your students might also enjoy performing the rap.

Now that you have a new learning tool, it's time to show it off.

The after-school video club at Kajitani's school, Mission Middle School, in Escondido, California, produced his video So Many Lines. The students drew a storyboard of the scenes for the video, selected actors for the various parts, and then filmed and edited the piece themselves -- and their creative efforts didn't go unnoticed: They won the 2007 iVIE award for the most innovative video in education. 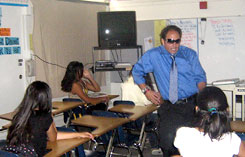 The school was so impressed with the students' work that they created a regular video-technology class during the school day. This year's class may make another video for Kajitani's song "The Itty Bitty Dot." After that project, the students will surely remember Kajitani's hook about adding and subtracting with decimals: "Just line up the dot and give it all you've got."