Editor's Note: Our guest blogger today is Karen Brown, the creative director for the Center for Ecoliteracy in Berkeley, CA.

"Sometimes creativity goes a little bit with what we call 'misbehavior.'" 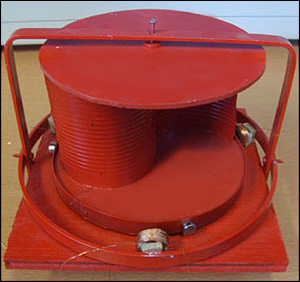 That's what Apple cofounder Steve Wozniak observes about his teenage days as an inventor, phreak, and hacker. It was an era in Woz's young life when he piled up math and science prizes and got in plenty of trouble, including a sentence to juvenile hall for rigging a classmate's locker with a prank "bomb."

"What I didn't know is that there had been some actual bomb threats at the school a few weeks earlier," writes Wozniak in his memoir, iWoz. "I probably didn't help myself any when I couldn't stop laughing when they told me."

But could it be equally true that creative expression - including creativity in science, technology, engineering, and math - is a way out of misbehavior for some students?

That's the conclusion you might draw from the work of Jonathan Peill, a UK science teacher at Long Eaton School in Derbyshire, who two years ago was tasked with developing an electronics course for middle-school students.

Not familiar with teaching electronics, Jonathan quickly needed to call upon his own creativity. Inspired by a video of a hamster wheel that powered a nightlight, he adapted the concept and developed a student project for a small functioning wind turbine that students fabricate themselves from recycled bean tins. (Yes, there are the inevitable jokes about beans and wind.)

The project meets STEM requirements and emphasizes recycling and alternative energy, while providing deep engagement for the often-neglected kinesthetic leaner. 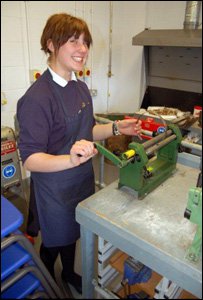 But a surprising discovery was the project's benefit to so-called "misbehaving" students. Or as Jonathan puts it, "Pupils who usually display challenging behaviour tend to be among the most enthusiastic and hard working." Some of these students had been on bad-behavior reports, suspended from school, and would be considered "at risk" in the U.S. system.

Now, many of these same students have flourished in their studies under Jonathan's direction. Why? He feels it is due to the opportunities for creativity and rewards embedded in the work itself, which he describes as "physical, self-paced, and structured, with a tangible outcome."

For example, some students who were scraping by in math can now routinely tackle equations like this: L=2y+x+104, where "L" is the length of a piece of metal in the turbine's frame.

Of course, there are plenty of top-notch students at Long Eaton who excel at electronics, too. Take Charlie, for instance, who built the wind turbine pictured at the top of this page. This past July, when a team from the Center for Ecoliteracy demonstrated his turbine at the Hawai'i Island School Garden Network Summer Conference, it proved to be a huge hit on an urgently relevant topic. Hawai'i currently generates about 90% of its electricity from fossil fuels - mostly by burning fuel oil. Educators at the conference could instantly see the educational value of a turbine like Charlie's. The idea of widely distributed, small-scale energy production -- as opposed to large wind farms that are costly and centralized, sometimes privately owned, and often unsightly -- sparked discussions about how energy could be distributed more economically and democratically and in deeper accordance with nature's practices of diversity and redundancy. Perhaps a combination of large wind systems and small innovative generators made from recycled metals that would otherwise enter the waste stream could provide a good solution for the islands, some educators reasoned.

Encouraged by increasing interest from other teachers, Jonathan recently began offering kits for those wanting to build turbines with their own students. He offers both UK and US versions on his new sustainability education website (www.renew-ed.org). Free demos are available there, as well as complete kits for £20 ($30 U.S.).

Karen Brown, creative director, is an award-winning designer who has worked with the Center for Ecoliteracy for over a decade. A former independent software developer and technologist, her exposure to concepts initially learned in IBM's usability laboratories instilled in her a lifelong sensitivity to the human and environmental consequences of good and bad design. Today, Karen's primary area of creative interest is in communicating with general audiences on issues of ecological literacy, education, and re-localization. Her work has been included in the Smithsonian Institution and Cooper-Hewitt National Design Museum, and featured in The New York Times, Architectural Digest, and dozens of other popular and technical publications as well as NBC's Today Show.