Two years ago when my wife and I moved to Madison, Wisconsin, I was lucky enough to get a job at a new project- and environment-based charter school, Badger Rock Middle. After a tough first year of learning and experimenting (sometimes with the help of Edutopia and sometimes with the help of other teachers like Sara Krauskopf, on whose project the following lesson is based), I have become more confident in assigning projects and letting students take them as far as possible.

During first quarter, Badger Rock’s sixth and seventh graders visited Madison's landfill and a recycling plant. The kids learned how the two businesses worked as systems, including:

Although this was part of a thematic unit that focused on systems rather than how to handle waste, students were engaged with the idea of recycling and what happens to their trash. 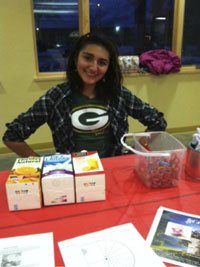 To build on their engagement and as a wrap-up to our work in first quarter, I asked the students to complete a project where they would figure out the problems with trash in Wisconsin, research some solutions to the problems, tell people about the solutions, and motivate people to try some. Students took many different paths for this work. Some worked on signs to help people recycle and compost their lunch trash, and others created brochures to teach people about solutions.

One group of three girls -- Angela, Jadah and Sagarika -- became very interested in the idea of upcycling. Essentially upcycling is a hip way to deal with your trash. Rather than just throw it in the waste or recycling receptacle, you reimagine it as art or craft. The three girls found several upcycling projects that they were interested in, and instead of just making these, they decided to have an evening where they invited the community in to learn about creating with waste materials.

In several meetings, the girls and I decided on three projects that they wanted to teach that evening:

They then decided on an evening to hold the event. To prepare for it, they had to talk to Cora White, the head of the community center that sits below our school in the Resilience Research Center. Cora decided not only to allow the kids to hold the event, but also to move the event to a night when the community center had a dinner, so that more people could be exposed to the girls' ideas. The students then had to advertise for donation of materials so they could have enough for people to use. After receiving some donated two-liter bottles, the girls saw that their plan was working, so they designed a flyer discussing their upcycle night and hit the streets. I joined them as they went door-to-door to let the nearby homes know what was happening. 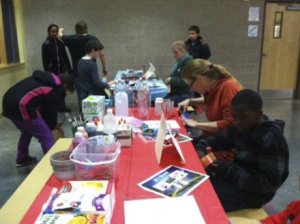 After all this work was done, the girls still needed to be prepared for the night. They practiced their upcycles on donated materials and created information leaflets about what they were doing as handouts for people who came to the event. Also, several other students became interested in doing their own upcycles that night, so the girls had to meet with these students to discuss each project and decide if it was a good fit. In the end, three other students were allowed in to make newspaper feathers and tissue box toy garages.

On upcycle night, all the students were well prepared and welcoming when the first folks showed up. There were several teachers in attendance, as well as other students from Badger Rock. However, the kids were most excited by the people who had seen their flyers and decided to stop by. These folks received special attention as the girls made sure to teach them as much about upcycling as possible.

At the end of the night, the girls talked about how much fun they had, describing their project as the best school event they had attended or thrown. They asked me if they could hold another event next week. I smiled and said, "Let's talk about it on Monday."