Ever wonder about the back story of those projects that lead to lasting, meaningful learning? How do authentic project-based learning (PBL) experiences come about? Too often, we only get to see glimpses of projects -- typically, when students are presenting their final work. Here's a chance to hear how a project unfolded.

Off to a Fast Start

When the opportunity came along for veteran teacher Mike Gwaltney (@mikegwaltney) to design a new government course for his high school students at Oregon Episcopal School in Portland, Oregon, he knew -- at least in broad strokes -- what he hoped to accomplish. "I didn't want students to just read about citizenship. I wanted them to be citizens," he says, outlining the real-world goals for the class called Government, Politics, and Citizenship.

In designing the new course, Gwaltney knew he wanted to leverage project-based learning. A PBL veteran, he appreciates the power of learning about history and social studies through in-depth inquiry.

To get off to a fast start with course planning, he built on existing resources. Specifically, he retooled a problem-based unit called LegiQuest, developed by the Buck Institute for Education. This unit is designed as a simulation, in which students take on the role of federal lobbyists to learn how bills become laws. 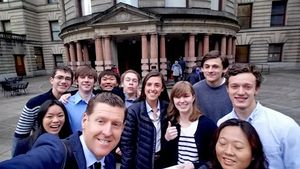 Gwaltney modified and "remixed" the unit into a real-world project. He started by adding an authentic context -- having students focus on issues in their own community. The local angle opened the door for more student voice and choice, and also set the stage for connecting students with authentic audiences.

Instead of a learning experience that felt "semi-authentic," Gwaltney says, "I wanted students to experience a true public performance." (To learn more about the differences between problem-based and project-based learning, read Project-Based Learning vs. Problem-Based Learning vs. X-BL, by John Larmer from Buck Institute for Education.)

From day one, Gwaltney let students know that they would be taking an active role as learners. Their teacher wasn't going to deliver content or teach them facts to recall for a test. Instead, he challenged students to decide how they, as citizens, might influence policies related to the issues that they wanted to address. "When he first said that, I thought we'd go write a paper about citizenship," says student Zachary Solomon. "This was different."

Of course, there was plenty of significant content about government and politics that Gwaltney wanted to make sure his students understood. He carefully structured the learning experience so that students would uncover this content through inquiry. Each Friday, for example, the class held Socratic seminars that focused on student-selected news stories about local politics.

Students reflected on those seminars in a Google doc, which provided Gwaltney with a useful formative assessment tool. "You can look at that log of our conversations and see the scope and sequence for a high school government class. All the content is there. We hit on everything in these conversations and reflections," he says.

Students investigated a number of hot-button political issues during the research phase of the project. Among their questions:

When a shooting happened in Portland just outside a school, the class decided to focus their efforts on the controversial issue of gun control. The relevance was obvious. One of the shooting victims was their age and had been an intern in the mayor's office. "That could have been us," said a senior named Elizabeth Keeney.

After researching the issue in more depth, they became convinced that cities have the authority to ban the sale and manufacture of assault weapons. They found examples of other municipalities that have enacted local gun control laws. Knowing they were wading into controversy, they anticipated counter-arguments and prepared their case.

Finally, students were ready to take their learning out of the classroom and into the world. It was time to find an audience.

As one outcome of the project, students decided to educate their peers about the importance of being engaged citizens. They tailored presentations for elementary, middle, and high school audiences at their K-12 school, including videos artfully directed by student Ted Morissette. "We wanted them to know, even if they're not old enough to vote, they have a voice," says student Maddie Mosscrop.

Gwaltney also arranged for his students to make a presentation about their gun control proposal before a panel of adults, including the head of school and others in positions of authority. He imagined this would be the culminating event for the project -- but soon he had second thoughts. "After they made their presentation, I asked them if they wanted to go for a more real audience, like City Hall," Gwaltney recalls. With students fully on board, the teacher contacted city officials. "My message was, these kids deserve to be heard." 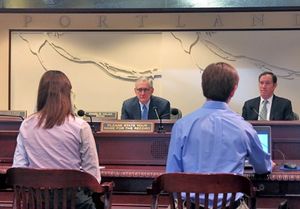 In February, the class went to Portland City Hall to speak before Mayor Charlie Hales and the City Council. "We were clearly the youngest people in the room," one student noticed. The mayor seemed particularly interested in what they had to say. "He leaned in when they were speaking," Gwaltney observed, and led the chamber in applause when they finished.

"We were specific," notes student Peter Graham, "and that helped us get taken seriously. We weren't just saying, here's an idea. We provided examples of city ordinances that have been upheld by the courts elsewhere. We provided language they can work with -- it's not something just made up by high school students."

For Gwaltney, one of the notable outcomes of the project was that students stayed engaged in the topic even after the class officially ended. Once they had a date on the City Council agenda, students spent several weeks working after school on their research and presentation. And except for one, all students are second-semester seniors. "In 24 years of teaching," Gwaltney, "these students were as engaged a group as I've ever taught."

What lessons will stick with them as they leave high school? "If you don't advocate for yourself about the issues you care about, then you can't expect anything to get done," says student Zachary Solomon. "Advocacy is a huge part of being a citizen."

Their work as citizens continues. "Now they're planning to testify before the state legislature," says Gwaltney. "It's out of my hands! This proves to me that they truly understand what it means to be a citizen."