Over the last 30 years, teacher-turned-principal Salome Thomas-EL has found success  leveraging the game of chess to teach math and history at the elementary and middle school levels, writes Kate Stoltzfus for ASCD.

But chess is not just about rote academics, says Thomas-EL: The game boosts student confidence, teaches them critical thinking and problem solving skills, and engages them behaviorally, emotionally, and cognitively, along with providing a host of other benefits. With enough practice, skilled chess players can even utilize both the left and right sides of their brain when playing.

“What I often say is that smart students don’t always play chess, but students who play chess always become smart,” said Thomas-EL in the interview with ASCD. “Students I had 30 years ago reach out to me and say they still remember those matches and are still using those skills in life, in business, in the corporate world, in law school.”

Many of Thomas-EL’s students are disadvantaged students of color, who have historically lacked access to enrichment opportunities that challenge their minds, he says. Chess has been a “great equalizer” that has let them prove themselves in a pastime traditionally associated with intellectuals and affluence. His students have gone on to play in numerous tournaments and won, collecting trophies and sometimes competing against players several years their senior.

“My idea was just to give them an environment where they could be comfortable exhibiting their greatness, because that’s not always easy and not always available,” he told ASCD. “Chess eliminated the preconceived notions, all the biases, the judgment.”

Thomas-EL’s observations are backed by an array of studies that show chess improves students’ academic and social and emotional skills. Here are some of the benefits of teaching chess to students—even when starting at a young age.

Builds Confidence in Students: Research conducted by the St. Louis Chess Club showed that 72 percent of students polled believe chess made them more confident with learning challenges; 75 percent of those same students also felt chess motivated them to seek out more difficult opportunities.

Thomas-EL says it’s important to ensure students are continually challenged in their learning. When his elementary and middle school students were winning games too easily, he matched them against more skilled high school players. “Failure is motivating. Success can be paralyzing,” he says. “We have to be okay with sort of getting out of that comfort zone and moving into the learning zone, which is close to the frustration zone.”

Builds Problem Solving Skills: In chess, players must be thinking critically at all times when faced with a series of challenges on the board, predicting several moves ahead of their opponent to win—a feature that helps students develop stronger problem-solving capabilities, says Thomas-EL.

A study conducted in the early '90s suggests that students who learned general problem-solving skills while playing chess could transfer those same skills to another academic domain, in this case, poetry.

Boosts Spatial-Analysis Skills: It’s estimated that approximately 2 million students in the K-12 schools are considered “spatially-talented” with abilities that are not traditionally identified during the gifted and talented screening process. These students possess skills that could be bolstered through chess because the game requires players to mentally picture a move they or their opponent may make on the board without physically touching any pieces.

“[Chess] teaches students to not only see the turn, but to see around the turn, because in chess you have to think five moves ahead,” says Thomas-EL.

Improves Math Scores: A study from 2015 showed a correlation between chess and improved math scores. Out of a group of 560 students, half were exposed to “normal school activities” while the other 280 students received in-person chess lessons and online training to bolster their mathematical problem-solving skills. 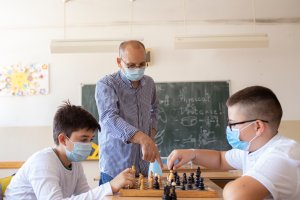 Students don’t have to wait until their next day back to in person school to continue their journey with chess, emphasizes Thomas-EL. Chess sets are fairly inexpensive and can be sent home with students. Websites like Chess.com also have resources for free games online, and in-school programs like First Move help students and staff learn how to play.

Though he acknowledges that not every student will become a decorated player, Thomas-EL says there is value in providing students the opportunity to play—all the while learning to, at times, gracefully accept defeat.