“I don’t like math,” my students commonly say. The alternative high school in rural Colorado where I’ve been working for the last two-and-a-half years serves students ages 14 to 20, who come to us when they have not done well in traditional environments since we have more freedom to use creative instructional methods to meet their needs.

Thinking about that comment, I used to ask myself, “How would the students’ attitudes toward math change if there was an opportunity to experience a different side of math, one that involved hands-on learning, promoted teamwork, and ended in a product to be proud of?” I thought I could use Rubik’s Cubes to facilitate camaraderie among my math-anxious and math-eager students, based on my own love of the popular puzzle. And after learning about students creating mosaics of historical figures, famous landmarks, and animals out of the cubes, I saw a way to promote critical thinking and algorithmic problem-solving.

I incorporated informal math conversations throughout the mosaic process. Once the students began to experience success in solving a face of the cube to build a mosaic, they became more open to mathematical conversations around the three-dimensional puzzle. 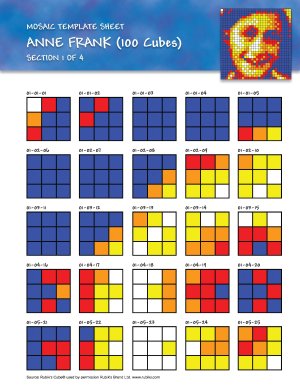 On different days, I would ask students questions like, “What percent of the mosaic is finished?” or “If three students are each able to solve one face at an average rate of two minutes, about how long will it take to complete the mosaic?”

I wanted to provide students with opportunities to use estimation and reasoning skills while still having fun. I didn’t incorporate paper-and-pen worksheets because I wanted them to practice mental math and approximation—useful skills that will help them as they progress through math.

There are several connections one can make between the Rubik’s Cube and math. The Rubik’s Cube can be used to conceptualize surface area and volume, as well as exhibit a net of a familiar, three-dimensional solid.

The Rubik’s Cube can be connected to fractions, ratios, and proportional reasoning. For example, on one face of a scrambled Rubik’s Cube, there may be three red, one blue, two green, two yellow, and one orange tile. The teacher can ask, “What fraction of the visible face do the red tiles represent? (Answer: 3/9 or 1/3).

For an older group of students, a teacher may introduce the concept of factorials to explain the 43,252,003,274,489,856,000 different combinations of the Rubik’s Cube. No matter how a Rubik’s Cube is arranged, it can be solved in 20 moves or fewer—a fact that typically piques students’ curiosity. 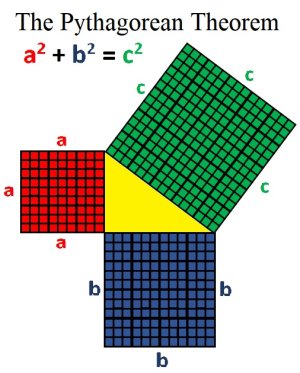 And by arranging squares of nine, 16, and 25 Rubik’s Cubes together so their corners form a triangle, a teacher can demonstrate the Pythagorean threorem, a2 + b2 = c2.

With a passion for the Rubik’s Cube, I researched ways to introduce the puzzle to students and came across the organization You Can Do the Rubik’s Cube. The group’s website has free templates for mosaics of icons such as Anne Frank, landmarks like the Golden Gate Bridge, and a variety of animals. (There’s also guidance for classes that want to create customized mosaics.) One mosaic may have as many as 600 cubes. [Editor’s note: You Can Do the Rubik’s Cube has closed, and the templates and lesson plans are no longer available.]

You Can Do The Rubik’s Cube is a lending library for the cubes and a resource that helps K–12 educators and youth organizations teach students how to solve the puzzle and engage them in STEAM lessons. Educators in the United States and Canada can borrow up to 600 Rubik’s Cubes for six weeks at a time.

This was perfect for my school since we offer five-week elective courses that capture students’ interests and align with teachers’ areas of expertise. I proposed a course entitled “Art and Problem-Solving with the Rubik’s Cube: Diversity,” and then borrowed 225 cubes once the course was approved.

Students in my class were interested in learning about the historical figures while constructing the mosaics, so they researched an icon of their choice from the mosaics we built. A couple of memorable figures included Marilyn Monroe, Rosa Parks, and Nikola Tesla.

Once my students learned how to arrange the Rubik’s Cube, most were able to do one face in two or three minutes, and even close to one minute on a great day. They worked alone or with a partner to build one 25-cube section at a time, and an entire 100-cube mosaic usually took 20 to 30 minutes to complete with five or six students.

There are free lessons and units for a variety of subjects, many created by and for educators, that address math and science standards.

For example, a middle school biology lesson plan uses a classification system to design “critters” using the concept of DNA codons. The lesson addresses Common Core English and Next Generation Science standards, like MS-LS3-1: “Develop and use a model to describe why structural changes to genes (mutations) located on chromosomes may affect proteins and may result in harmful, beneficial, or neutral effects to the structure and function of the organism.”

The Rubik’s Cube is an engaging way to explore many topics across content areas. With a growth mindset and determination to provide an engaging experience for all, educators can motivate students and inspire them to seek out challenges and pursue ways to think critically and solve new problems.