Recently we posted a brief research finding from Stanford math professor Jo Boaler: “Timed math tests can discourage students, leading to math anxiety and a long-term fear of the subject.” That terse conclusion, from a 2014 article in Teaching Children Mathematics, provoked a torrent of passionate comments as educators and former students weighed in on the merits of timed testing.

The debate split the audience in half. One side argued that timed testing was valuable because there are real deadlines in life and careers—and real consequences to missing them. Others felt that timed testing causes a kind of paralysis in children, throwing a wrench into students’ cognitive machinery and hindering deeper learning. What’s the point of timed testing, the latter group argued, if the results are as much a measure of fear as aptitude?

But timed tests aren’t likely to go away anytime soon. Children take as many as 20 standardized tests each year, and timed testing follows students through college entrance exams and into their careers. Some certifications for teachers, electricians, and medical laboratory technicians even require timed tests, our readers noted. “Maybe slowly getting used to timed tests,” mused Brenda Anderjaska, “won’t make the big tests seem so looming.”

It adds up to a prickly set of questions for teachers. How do you strike the right balance between preparing students for tests and deadlines, and ensuring that they have the time—and the skills—to solve challenging math problems? And if timed tests are required, as they are in most schools, how do you bring them into your classroom without inducing a debilitating fear of math?

For many, taking math as a child was a dreadful experience. “Timed tests were the horror of my primary schooling,” Rawini Ngaamo recalled. “All I learned from them is that I was stupid and slow. I still hate maths even now because of the way it was taught.” Dozens of people agreed, recalling their own personal experiences or sharing those of their students or children.

The effects appear to be long-lasting, haunting some of the commenters for decades: “As a 57-year-old, I can still recall the anxiety of timed tests,” said Debbie Denmead Cassady, before suggesting that teachers “forget them” in the future. And the post brought back vivid, unpleasant memories of elementary school for Adina Thuransky: “In second grade, our teacher timed us on math facts (times tables)... it freaked me out so much I can still remember how much anxiety I felt!”

These readers are clearly not alone. Nearly 50 percent of first- and second-grade students experience math anxiety, and forcing young kids to take timed tests when they’re not ready can backfire, as Tonya Blanchette shared: “This happened to my son early on and he became very stressed and anxious at only 6 years old, claiming he hated math. It breaks your heart.”

The image that sparked the debate. 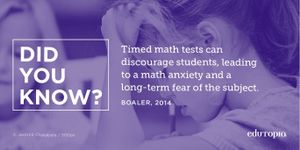 The image that sparked the debate.

Timed Tests and the Fundamentals

Despite all the back-and-forth, almost all teachers acknowledged the need to drive students toward deeper learning. You don’t build safe bridges or send rockets into space with multiplication tables alone. But many teachers also felt that timed tests are an important step on the road to mathematical fluency, improving speed and laying a foundation for complex problem solving. Timed tests don’t undermine mastery, these teachers argued—they support it.

“When students get to more complex math problems, they get bogged down by having to actually think to calculate basic math facts,” said Beth Kappauff, summarizing a position taken by dozens of educators in the discussion. “A kid who has to consider the answer to ‘3 × 4’ will struggle in algebra and beyond. They need math facts to free up time and attention for deep thinking about harder concepts.”

The upshot is that kids may not like timed math tests, and some adults may carry scars from them—but building speed and fluency matters. To many teachers, not preparing students for that eventuality of timed testing felt too much like “setting the kids up for failure.”

As Barb Larochelle put it, “No one likes taking a timed test. The unfortunate reality is that in high school and in university, there are timed tests. And if a student has never encountered this situation before then because it was too ‘discouraging’ or it made them too ‘anxious,’ it’s going to be even harder when the exams are high stakes and there are no options to not be timed.”

Be Mindful of Students With Disabilities

It’s critical to consider the effect of timed tests on students with learning disabilities—a point raised by several parents and teachers. While 5 percent of students have a learning disability, a staggering 15 percent or more may have unidentified and unaddressed learning and attention issues, leading to a dangerous blind spot for teachers. Far from being bad at math, these students may simply need more time to process math problems.

“I have a daughter who was gifted with ADHD and had a learning disability in math that was not identified because she was so bright,” wrote Susie Stough. “She never had her name on the ‘math hall of fame’ on the hallway wall, which listed all the kids in the school who passed the timed test.”

Timed tests were the horror of my primary schooling. All I learned from them is that I was stupid and slow.

What Can Teachers Do?

If timed tests are unavoidable—at least until state and federal authorities roll back testing requirements, which is unlikely—what can educators do to help students cope with timed testing, and reduce math anxiety more generally?

Experienced teachers in our audience offered a variety of strategies. Many educators use simple games to liven up practice sessions—recasting timed testing as an engaging race against the clock. If that seems like a fairly obvious approach, an important nuance emerged during the discussion: Most teachers who gamified their timed tests chose not to grade them, or graded them only for accuracy and not completion. And teacher after teacher insisted that kids make better, healthier progress if they focus on consistent, incremental improvements over their own past performance. For younger children especially, this simple approach gives them the space to build skills and confidence before they confront actual timed tests.

Focus on moving the individual child forward, in other words, and de-emphasize ranking the performance among peers or against a fixed time limit.

“My tactic... was to give a Mad Math Minute page with a lot of problems—and announce that no one could possibly finish this many correctly, and you weren’t expected to,” explained Dot McGee, emphasizing the noncompetitive dynamics. “Our goal was to do at least one more problem than you did the last time. Not competing against anyone but yourself, and keeping your own score.”

All of this is a lot to consider—much more than we thought when we originally posted Boaler’s conclusion. Timed testing clearly brings up a range of tough issues. So the next time you give a timed test to your students, think about how some of them—not all, but some—may be feeling extra stress as a result. What can you do to help them out?