My goal is to encourage innovative, local pedagogy, which is to say learning experiences that engage and challenge students based on who they are and current developments and issues within their society and community. My book, Teaching for a Living Democracy, provides a framework to assist teachers in designing curriculum of their own, creating opportunities for students to produce work relevant to their lived realities. These authentic learning experiences can be difficult to quantify. While the learning easily meets, and typically exceeds, standards and outside requirements, the end results cannot be accurately judged with a test score or checklist. Yet any observer can bear witness to students’ deep intellectual exploration and the life-affirming qualities of growth and collaboration. 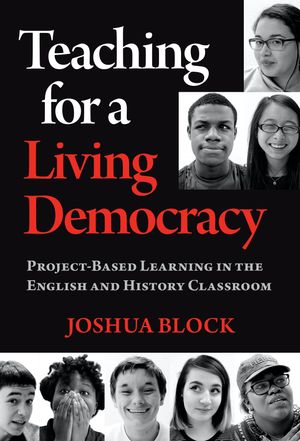 School matters to students when they are given opportunities to engage with the world around them and ask questions about issues that are often ignored or overlooked. As students engage by reflecting on their experiences, learning about our society, and both envisioning and working for social change, they learn that there is substance to their ideas and they can inhabit multiple roles in the world. When learning is designed in ways that prioritize student voices and thought, there is a clear pathway for students to invest themselves fully and genuinely in quality work that matters. Another way to think of this is to allow students to make meaning of content on their own terms.

In addition to regularly sharing both rough work and finished products out loud, students can regularly generate questions and facilitate discussions. When I prepare students well and successfully set them up to develop their own ideas, my students facilitate their own discussions by quoting sources, calling on each other, and questioning each other deeply. During these times I regularly remind students to speak to each other and not solely to me. I position myself off to the side or behind other students, in order to make sure students speak to each other and shift away from a model where the teacher is always the center of the action.

Facilitating group class discussion can be a revolving classroom role, or classes can develop guidelines and systems for collectively run discussions. (An example would be having each speaker call on the next person to speak.) Classes can self-evaluate their performance and learn more about discussion and facilitation skills in the process. These are not moments when the teacher is invisible but rather when the role of the teacher is that of an assistant or guide who is ready to step in when needed before returning to the periphery.

One pathway that allows students to shift away from passivity is through strategic and meaningful student choice. Too much structure can remove individual investment and creativity. When choice is not backed up with clear modeling of expectations and guidelines, many are left unsure of how to proceed. There are times when students are able to pursue their passions and independently create projects, and other times when students can be given choice in smaller, yet still significant, ways. The parameters of choice vary depending on the cycles of the school year, the students, the project, and other factors. For example, early in the school year or in the beginning stages of a unit when I want to establish shared reference points or knowledge, choice will be more limited. As the year or a unit progresses, I will create more opportunities for students to branch out and direct their own intellectual process.

Most of the units I design begin with the whole class reading, writing, and discussing the same topics, but there is almost always a point where students are given opportunities to continue their investigation by creating a project on a topic of their choosing. This means that many students will struggle to find a topic, angle, or approach that works for them. I work to support this authentic process of struggle while challenging them to create projects that present ideas that are unique and compelling. This means that I expect my students to do hard intellectual and creative work in order to succeed. I tell them that I want projects to be “professional quality” and ready for an outside audience. This means that students will have to revise well past what their teenage patience generally allows.

Design Your Own Learning Projects

I am continually trying to develop new strategies for students to own their work and produce creations that matter to them. One pathway I continue to explore is to base part of a course on projects designed by the students themselves. With the criteria for these projects, I aim to provide an open door for exploration and discovery while sparking interest and possibility.

Several years ago, starting with the idea that projects should focus on untold stories or hidden realities, I presented students with a range of sources, potential project ideas, and models of work from journalists and previous students. They then had several days until their initial proposals were due for their Design Your Own Learning projects. Some students chose to work on their own while others self-selected into groups. I explained that the scale of the work needed to reflect the number of people working on the project. Proposals included four parts:

Once the proposals were submitted, I began the process of conferencing with students and groups, helping them modify and focus their initial ideas. At the beginning of classes I asked certain groups to share their ideas with the whole class, knowing that other groups would benefit from hearing about the project ideas being developed. Student groups began to map out their goals for each week we would spend working on the project. One group of three young women began their work by reading and writing dialogue journals in response to the book On the Run: Fugitive Life in an American City. They were drawn in by the ethnography and the ways it described many of the dynamics they witnessed in their own neighborhoods, but two weeks into the work they still didn’t have a clear idea for their final product. At the proposal stage, I accepted their lack of larger vision as necessary for the development of a future compelling idea—many people don’t know what they want to create until they research and actually begin the process of creation itself.

When we were further into the process, I both reassured them but also tried to actively nudge them towards something specific and compelling. “What different ideas or topics from the book are drawing your attention? Be specific. I’ll come back in 15 minutes to see your list.” I walked towards another group knowing that their annoyance with me was growing and that at this point they were not invested in the process that lay ahead. I also knew that much of what they were going through was a natural part of the struggle of having the responsibility to develop an idea and design work on their own and wanted to give them time on their own to move towards the next stage.

When I returned, after checking in with other student groups, they had the beginning of an idea. “We want to make a documentary about dark skinned versus light skinned,” said Imani “They mention it in the book and it’s all around [us].” Each of the young women (all of whom were African American) had examples of why this issue mattered and how it impacted their lives and the lives of people they knew. Maybe most importantly, I was hearing them speak about it with clear interest and a desire to educate others. I asked them to tell me more as I recorded additional bullet points of ideas and questions to the list they created on their project doc.

Four weeks later the young women were wrapping up the final stages of their documentary. I sat with each of them, reading through what they had written, offering ideas to polish the text. During this time I pointed out some repeated grammar errors that I was observing and shared general ideas for strengthening the writing. After these individual check-ins I spoke with them as a group, asking them to further describe their plan for their multimedia component, taking the opportunity to ask them clarifying questions about their approach and pointing out decisions they would have to make during the video editing process.

They had divided the work amongst themselves. I eavesdropped from the other side of the room as they held each other accountable, sometimes hearing them express annoyance that someone had not completed a task assigned to them. They had interviewed multiple students during their lunch period, and the video clips that they showed me were impressive. In one clip a young man speaks about his desire to date only light skinned girls. In another a darker skinned girl speaks about being continuously judged based on her skin color. In one of the posts on the site, Joie wrote, “As a young African American woman of a deeper skin tone, I constantly battle with the way I look on the outside.” She added, “I always have been judged by the opposite sex because my hair is not a certain length and my skin is not close to white.” The three students were in the final stages of a project they clearly cared deeply about, but they were also struggling with the reality of the work required to produce something that they could feel proud of and share widely.

In the days after the project was completed and posted to the web, the young women and I shared it through our social media accounts. It seemed to speak to an issue that mattered to many people; the number of views of the video and the number of postings and comments on social media continued to grow. The students (and I) were giddy as we watched the project spread well beyond what we had anticipated. Each day they reported the new numbers to me. When I told them I had been contacted by a journalist who wanted to write an article about their work, they stood in front of me with their eyes wide open, barely containing their excitement while also expressing disbelief. In their interview, the students described their process, affirming the passion they felt for the topic and different ways they had both struggled and succeeded during the process.

Reprinted by permission of the publisher. From Joshua Block, Teaching for a Living Democracy: Project-Based Learning in the English and History Classroom. New York: Teachers College Press. ©2020 by Teachers College, Columbia University. All rights reserved.