As we go about our daily lives, we rarely do rigorous mathematical calculations. Most of us are not taking derivatives, factoring trinomials, or computing standard deviations. Think about how you use math each day.

Maybe you use it when you take a quick glance in your cupboard to see if you have enough flour to get you through the next week. You might use it to figure out what time you need to start cooking in order to have dinner on the table by six. I’m using it right now to get a rough word count as I write.

It’s not often that we take out a pen and paper and calculate these things. We’re estimating. We’re using number sense.

Number sense is not something you teach. You don’t necessarily get it by doing math problems, especially not problems that have a right or wrong numerical answer. The only way to build it is through practice and experience. And yet, we’d be doing our students a disservice if we let them leave our math classes without it.

I stumbled across a strategy for helping students build their number sense completely by accident. A colleague was obsessed with daily calendars, and because I am a statistics teacher, he gave me a calendar with a daily statistic.

At the end of class one day, we had a few minutes to kill, and I asked my students to guess the day’s statistic:

“What is the average number of bananas eaten by Americans per year?”

It became a competition to see who was closest. That first day, their guesses were mediocre at best. The next day, they asked, “What’s today’s stat?” Again, we guessed:

“How many gallons of water fit into an Olympic-sized swimming pool on average?”

To figure out this one, they did more careful mental math that would help them make the estimate, and they did a little better.

Seeing their enthusiasm, I’ve made this a regular agenda item in class. We end class a few minutes early every day to “guess the stat.” I keep a running tally on the board of who has the closest guess each day. At the end of the week, the winner earns some sort of prize—usually a baked good that I make and bring in for the class on the following Monday.

Over time, their number sense has improved. They have become better at guessing and using logic to arrive at good estimates. They are curious and ask questions that help them make better guesses. It’s neat to see students who aren’t as careful with their computations and struggle with some of the rigor in the class thrive at making good estimates. The friendly competition also has built community.

With my seventh- and eighth-grade students, I try to cultivate number sense through hands-on estimating activities that I sprinkle throughout the curriculum. The following is an experiment related to volume that’s a good example of one such activity.

I show the students all the objects, and we review their names. Next, I present the challenge!

“If I were to fill each one up to the line, which would fit the most water? Could you rank them from most to least?"

I don’t ask for the exact volume up to each line, just a ranking of how much each container can hold below the line. I usually don’t even use the word volume. This keeps the focus on number sense and estimation rather than calculations.

They usually shout out guesses and sometimes even start to argue. Math to the rescue!

The only rule for making their estimates is that they cannot use water. We’ll use water to test their answers.

One thing I love about this activity is how it naturally lends itself to differentiation. Some students decided to use the length, width, and height of the circumscribing cube for each shape and estimate the volume based on that.

More advanced students look up the volume formulas for each shape, take measurements, and apply them.

Less advanced students gravitate toward a more experimental approach. One year, I had students fill each shape with pencil shavings and compare the quantities. They ran all around the building collecting each teacher’s pencil shavings until they had enough. It was interesting to see them grappling with how to rank the volumes of each object as they poured pencil shavings from one container into another. 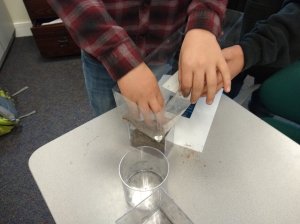 At the end of class, we use a big basin of water to check their rankings.

The benefit of all these approaches is that every student grows their number sense by seeing the methods that their classmates employ. They learn different strategies for estimating.

The other thing I love about this activity is that the students learn that things aren’t always as they seem. Their initial predictions are usually incorrect. This realization makes the activity stick in their memories.

Number sense is an important skill that we rely on each day. While we can’t explicitly teach it, we can be intentional about cultivating it in our students.