It’s well known that children learn by playing and that playing has numerous cognitive benefits, including flexibility, focus, self-control, organization, and planning. Playing games may also help children develop logical, executive, and social skills. Some studies show that such benefits can come from video games, as these can strengthen a range of cognitive abilities, including visual and spatial discrimination, memory, reasoning, logic, and problem solving.

Because play is self-motivated and fun, students learn without feeling that they’re working hard or that the task is too difficult. They focus for long periods and become completely immersed in what they’re doing. In short, offering children playful lessons or the opportunity to play taps into their natural predisposition for intense, self-directed learning.

In addition to delivering lots of practice for hand-eye coordination, strategic planning, and decision making, educational video games structure problem solving and train students to “fail up”—to learn from their mistakes, try again, and persist until the problem is solved.

Most importantly, research shows that video games sharpen visual discrimination skills, spatial thinking, and the ability to visualize and interact with 3D objects—good predictors of not only academic achievement but future engagement and success in science, technology, engineering, and mathematics—the STEM fields. And there’s evidence that spatial skills can get better with practice.

As the school curriculum becomes ever more crowded, informal educational experiences that take place outside the classroom are a strategy we use at my school. An example for middle school is the MathMob. That’s our version of a flashmob—a group of people mobilized by social media who meet in a public place to participate in a brief unusual or entertaining activity. At my independent all-girls school in Bethesda, Maryland, the students assemble in a common area to play math games on iPads or smartphones for up to 20 minutes.

One of our favorites is 2048, a single-player strategy puzzle that involves combining two tiles with the same number—all powers of 2—so that they merge into one tile with twice the value. The goal is to reach 2,048 before the board fills up completely. This game encourages strategic thinking and planning, as well as focus, as it challenges players to solve ever more complex configurations. 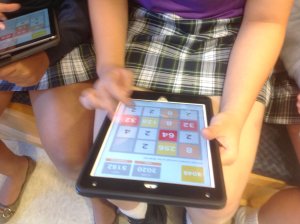 Another favorite is Flow Free, a simple yet challenging game that focuses on visual discrimination, spatial thinking, logic, and creativity. The playing grid has a series of colored dots—the more dots, the more challenging the game—and the player must connect two dots with the same color without leaving any spot empty and without crossing any other flow line. The time trial mode, which we play, challenges the students to complete as many puzzles as possible within a given amount of time.

Other potential games include sudoku and KenKen puzzles as well as 1010!, Flow Free Hexes, Block! Hexa Puzzle, and Roll the Ball (all are available for iOS and Android devices).

In our school, the entire community of students, faculty, and staff belongs to either the White or Blue team, and during the school year the two teams compete for points in various events, such as Field Day or Problem of the Cycle.

MathMobs are included in these events for middle school, so they’re a team competition. The winner of the activity is the team with the highest aggregate score. This means the girls—including those who think that math is not their thing—have an incentive to participate as they all like the perks (usually a day out of uniform) that come with winning the team competition over the course of a trimester.

We set aside about 20 minutes at the beginning or end of study hall, or lunch, or otherwise flexible time. MathMobs are kept short to maintain the focus and keep the excitement high. When time is up, the students sign out with their score (for example, their highest tile in 2048 or the number of games they completed in the time trial mode of Flow Free), and the winning team is usually announced at the next assembly.

Building a Sense of Community

MathMobs are very popular: Usually a third or more of the middle school students participate. These events encourage community building as students from both grades (7 and 8) play math-oriented games together regardless of their math ability. Because the team competition is very stiff, and often the difference between winning and losing is just a few points, each student feels that her contribution can make a difference.

In addition, the girls enjoy the low-pressure environment and the collective nature of the games, especially in a subject area that is usually very structured, high stakes, competitive, and individualistic. While we don’t formally evaluate MathMobs, outside observers—including colleagues from other disciplines—often remark on how impressive it is to create a safe space in which middle schoolers are comfortable playing math games in public for fun.