When boys and girls were asked to draw a scientist in a study several decades ago, the results revealed a stunning bias: 99.4 percent of the drawings depicted a male scientist. Out of 5,000 drawings collected between 1966 and 1977, only 28 were of female scientists, all of which were drawn by girls.

Since then, nearly 80 studies have repeated this experiment with over 20,000 students across all grade levels, and the results of all these studies were reviewed in a meta-analysis published last year.

3 Key Findings of the Meta-Analysis

1. Children are drawing female scientists more often: In the original 11-year study, less than 1 percent of the drawings collected from boys and girls were of female scientists. That number rose over the decades, reaching “28 percent on average in later studies,” according to the meta-analysis.

2. Girls are driving the shift: Girls in particular began to draw female scientists more often. Only 1.2 percent of girls drew scientists as female in the original study, a figure that rose to 33 percent in 1985 and then to 58 percent in 2016—vastly outpacing boys, who still draw male scientists nearly nine of out 10 times. 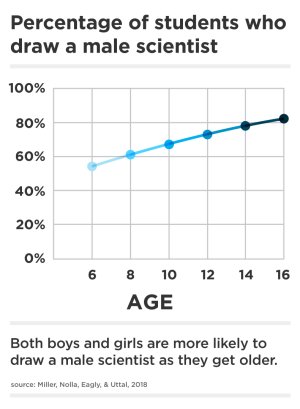 The overall changes in how children portray scientists aligns with larger trends in women joining science-related occupations. Data from the National Science Foundation shows that in 2015, women made up 48 percent of biological, agricultural, and environmental life scientists, up from 34 percent in 1993. Women in all science and engineering occupations increased more modestly, from 22.9 percent in 1993 to 28.4 percent in 2015.

Teachers play an important role in encouraging children—girls in particular—to pursue an interest in science. David Miller and his colleagues on the meta-analysis point out that “girls may avoid activities that they consider appropriate for boys but not girls,” and everything from the language a teacher uses to the decorations on classroom walls may give students subtle messages about the roles of men and women in science.

Why is this important? Because “stereotypes linking science with men might limit girls’ interests in science-related activities and careers,” the researchers contend. When girls don’t see women as scientists, it’s more likely that they won’t see their future selves as scientists, either.

6 Tips for Promoting a Sense of Inclusion in the Sciences

1. Use diverse posters and other classroom decorations: A 2014 study found that a classroom’s symbolic features—such as images of scientists displayed on the walls—tell students “whether they are valued learners and belong within the classroom.” When students don’t see themselves represented in classroom materials, this can have “far-reaching consequences” for the choices they make in school, such as whether to take advanced science courses. Decorations should represent students of diverse genders, backgrounds, and interests.

2. Promote books that highlight girls and women: Children’s science books depict male scientists three times as often as female ones, a 2018 study found. Not only were women underrepresented, but their contributions were diminished—books often presented them in a way that that suggested they were “passive, lower status, and superficial.” To combat this, teachers can intentionally share books that feature inspiring girls and women in science.

3. Invite guest speakers and role models: Girls with a role model are more likely to be interested in, and pursue, a career in science, a 2018 study performed in the U.K. found. Teachers can invite female scientists to speak to their students in person or via videoconference, or ask students to interview scientists in their community.

4. Be mindful of gender bias in language: The words we use can reinforce gender stereotypes, a 2016 study found. For example, referring to boys as “future scientists” while calling girls “future female scientists” can reduce girls’ sense that science is an appropriate profession for them. And a 2018 report on makerspaces found that instructors tended to use terms like “geeks,” “builders,” and “designers” for male students while calling female students “girls” or “helpers.” Such language “shaped attitudes and activities within the makerspaces,” making it less likely that girls would hold leadership positions while allowing boys to have a larger role in steering group decisions.

5. Encourage a growth mindset: Girls as young as 6 years old are willing to put more boys than girls in the category “really, really smart” and avoid activities that they perceive as being for smart kids, a 2017 study found. To combat this, teachers can emphasize that intelligence isn’t fixed and that all students have the capability to develop their abilities. As an activity, students can explore how the data on math and science achievement challenges prevailing stereotypes about boys and girls.

6. Avoid anxiety transfer: Teachers may inadvertently transfer their own math anxiety to their students, a 2018 study cautioned. When they do so, they send the message that “not everyone can be good at math.” Girls, in particular, are susceptible to a teacher’s math anxiety, according to a 2010 study. The more anxiety teachers felt toward math, the more likely girls were to believe that “boys are good at math, and girls are good at reading,” and to have lower math achievement. High expectations paired with instructional strategies that emphasized learning instead of memorization and ability helped students develop a more positive attitude toward math.