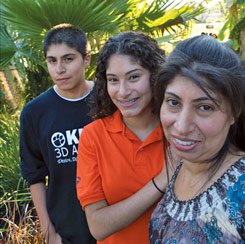 "Our students are here because they're on a mission," says teacher Craig Brandenburg. They dig deep and recover from setbacks, he adds, because "they know their ultimate goal is to prepare themselves for college. And not just going to college, but completing it."

This was not always the plan for most YES Prep kids -- and that's the whole point.

Mayra Valle is a warm, bubbly leader in the school's performing arts group. When she graduates this spring, she will be the first in her extended family to complete high school. Her mother came to Texas as a girl from Mexico. Her father drives a landscaping truck between Houston and Austin, which means he doesn't see his children as much as he would like. Mayra's aunts and uncles toil as housekeepers and construction workers.

Ludvinia Valle drives her daughter back and forth to YES Prep, leaving at 7 in the morning and returning at 7 at night to pick her up, after theater rehearsal. "Having a YES student requires a lot of support from the parents," she says. "They really need a good breakfast in the morning, dinner at night, fruit, so they can keep going."

Mayra has sacrificed valuable time with family to spend long days at school and late nights doing homework. While away on a school field trip far from home last April, she missed a last visit with her grandmother on her deathbed. Now she's driven by what her grandmother used to tell her: "Look at your parents, your aunts and uncles. I don't want you cleaning toilets when you grow up. They're doing it because they don't have a choice. You have a choice. There's a reason we came to America."

Despite the often rocky transition to YES Prep's sixth grade, most students learn to manage and ultimately welcome the rigor of tailoring their work to the teachers' tough rubrics, doing multiple revisions, and supplying their own analysis and argument on each topic. By the time they hit the upper grades, they're reading existentialist literature and debating the nature of society.

Teacher and principal Bryan Reed knows Mayra, along with many other students, very well -- the relationships are part of how YES Prep helps kids meet the sometimes overwhelming demands on them. Reed has, for instance, met Mayra on weekends to help her with a paper, and when her grandmother died, Reed told her to call him if she needed anything, even someone to walk her dog. "And I believe it," Mayra says. "If I had called him, he would have been there. And that's true of all the other teachers and all the other students."

With money earned from fundraisers, the school sends teachers and students to visit colleges -- some local, some as far away as Colorado and Illinois. "The kids see what the end goal is. They know what they're working toward," says English teacher Emily Shisler, who took a group of students to her alma mater, Northwestern University. In their seven years at North Central, students will visit as many as 20 colleges, both local and out of state.

Parents make their contributions, too, though some are considerably less active than others. Almost all must find a way to shuttle their kids to school at odd hours and help manage their stress at home. (Teachers frequently serve as chauffeurs to kids whose parents are unable to help out.) "Parents have to be that support system," says Elia Torres, a mom who also works in the school's office. "Kids are here long hours of the day and on Saturdays. They're required to do more than in a regular school, and they get tired." The payoff, she says, "is the gleam in their eye."

Yet just about every student has had a moment of self-doubt, when the work, the hours, and the expectations were all too much. About 5 percent of students transfer out of YES Prep schools each year, though virtually none of them drops out entirely. Torres remembers when her daughter Norma, after two months, wanted to transfer schools. "I said, 'Remember, we signed a contract,'" Torres recalls, referencing the document all students and parents sign upon enrollment. "I signed a contract saying I was committed to your education, and we're not breaking that."

Ultimately, the powerful prospect of a better life (and for some, the exhortations of their parents) keeps most of them marching on. Watching kids at soccer practice, taking turns on the sidelines tutoring teammates whose low grades have disqualified them, sometimes working by flashlight as dusk falls -- there's no disputing their commitment to their mission.