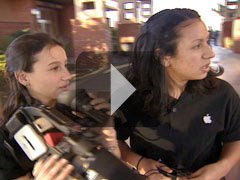 Editor's Note: Though the San Fernando Education Technology Team is no longer active at San Fernando High School, some of the former participants have created their own company to tell stories through media, and continue to foster the program's goals by working with San Fernando students on Saturdays to produce the iCan Film Festival. Marco Torres has moved on from San Fernando High School to become an educational consultant.

Until Consuelo Molina discovered the San Fernando Education Technology Team (SFETT), she wasn't particularly engaged in school, and her extreme shyness kept her from being anything more than an uncomfortable, silent observer in class. However, through the technology-team program and its photography, videotaping, sound recording, editing, and presentation instruction and equipment, Molina's voice is now loud and clear, and her opinions are known around the world.

A Sacrifice for You, Molina's Web video on sweatshops, has been praised and used by participants at the Women's Human Rights Conference in Paris, by Apple CEO Steve Jobs, and by a teacher in India, among others.

"Her passion and her interest to talk about something that really bothered her and to have it reach every corner of the world was an experience that she'll never forget," says Marco Torres, the teacher who started the technology team at San Fernando High School, north of Los Angeles. The school has a population of predominantly poor Latino students. Ninety-six percent have no access to computers at home, and 83 percent perform below grade level. So far, about 300 people have participated in the SFETT program, and all of the 80 SFETT participants who graduated from San Fernando have gone on to college. Torres says the program catches students' interest because it focuses on learning by doing and speaks to their fascination with technology and all things digital.

Student Cesar Larios's video explores the struggles of life in an immigrant neighborhood.

Multimedia for Learning That Sticks

What Torres remembers about his own education are the things he made in school: the plaster cast of his hand in kindergarten, the spouting volcano in third grade, the model of a California mission in fourth grade. His students, he finds, enjoy coming up with a tangible product as much as he did. "I see kids that don't traditionally do well in school succeed because this was another way for them to express themselves," he says.

"Media is the language of kids," Torres adds, saying that students who may not take to learning by reading a textbook or listening to a lecture often jump at the chance to understand complex concepts by presenting finished products in the form of a film or a Web documentary or a Microsoft PowerPoint presentation.

Junior Marisol Garcia had a choice between "really big-deal" cheerleading and SFETT. She chose SFETT. "It is more than just a class," she says. "It is lots of work, but work I look forward to. There are always new things, new opportunities. It's exciting." She says adds if all classes were hands on like in SFETT, students would learn much more in school than they usually do.

SFETT is in part funded by the California Digital High School grant program. It also enjoys the support of a number of private businesses. Norstan became a major contributor toward equipment for the program's Computer Inspiration Studio. Apple Computer, as well as individual Apple executives, contributed equipment and expertise.

Multimedia tools are introduced through projects in several formats: documentaries, music, experimental video, advocacy/selling ideas, and storytelling/feature production. Content for the projects comes from the students and is often based on assignments given in other classes. Molina's sweatshop project, for example, fulfilled an assignment in her economics class. Using up-to-date "presentation of learned information makes for realistic, contextual, emotional connections" to what is learned, says Torres.

Recent projects run the gamut from lighthearted to serious, and at least two focused on politics:

Other projects have included animated stories and commercial ads, some of which were entered in a "Got Milk?" competition sponsored by the California Milk Processor Board. One ad made it to the semifinals.

Once a topic is chosen, extensive planning begins. Students must present convincing written and verbal arguments to Torres before being allowed to use the equipment. They develop critical questions to address in their presentations. Storyboards are created to communicate graphically the angle or scope of individual camera shots or segments of a visual presentation. A timeline of daily deadlines gauges progress. Students design evaluation rubrics to ensure they are on the right track while working through the process. Once the plan is approved, students check out the equipment appropriate to implement their idea.

Torres's mantra for his students is "Planning, production, presentation, sssessment, and sdministration," with an emphasis on planning. "It's easier to take an eraser to a blueprint than a pickax to a foundation," he says. Students learn through practice that careful time management and teamwork help them accomplish their goals. Torres marvels at the way the kids work together and learn from each other as they try every route possible to create a high-quality final product.

Consuelo Molina made schoolwork personal and meaningful through video productions like A Sacrifice for You.

"Anything is completely possible, really possible," Torres, who has been recognized by California governor Gray Davis as a model educator and named an Apple Distinguished Educator, often tells his students. "Never give up. Be leaders." An effective way to instill leadership, he emphasizes, is to share expertise.

At the start of the program, Torres identified students and faculty willing to gain proficiency with the sophisticated equipment. They became the team providing technology support and encouragement to other students, faculty, and community members. Torres estimates that 150 San Fernando High School teachers have been trained and says that half the students at the school have used the program's Computer Inspiration Studio, where the equipment is housed. As it has matured, the program also has developed a Web library of lesson plans, professional-development opportunities, and an evaluation rubric.

Molina, the student who produced the acclaimed video on sweatshops, was among those who progressed from novice to expert. During her first year in SFETT, she learned basic multimedia production. By the second year, she was teaching other students and parents on weekdays and Saturdays, when the program is open to community members. She taught computers and multimedia and showed parents, most of whom did not have computers at home, how to preserve old photographs by scanning them into computers.

Now enrolled as a biology major at the University of California at Los Angeles, Molina has far from abandoned her interest in video. She squeezed a film-production class into her schedule, does video editing, works on film crews, and returns frequently to see what SFETT students are doing, learn about new developments, and help out.

SFETT program lives on for many students. "In SFETT, I learned lots of different ways to communicate through technology -- how to gather information, speak, make a presentation, project myself, throw in a joke every so often," says Ernesto Hernandez, a sophomore economics student at Los Angeles's Occidental College. "The program really focuses on using the computer as a tool to express ideas. In school, it is sometimes hard for students to express themselves."

The most powerful lesson he learned, however, had to do with working collaboratively. "The only way to get things done is through teamwork," Hernandez says. Torres agrees, and the physical design of the multimedia studio supports collaboration with clusters of workstations and a "think room" where students meet and discuss projects. One example of the kind of cooperation it takes to make a film is seen in the production of Snowfight II. The project involved twenty-six people in its direction, story, storyboards, editing, modeling, animation, sound, character voices, and music.

"Working in this program has completely changed the students' outlooks, their lives," says Torres.