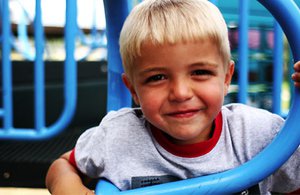 This resource article accompanies the feature "Kids Design Their Own Playground."

Childhood play is coming under increasingly serious study. Recent reports underscore the importance of kids' play to address childhood obesity, build social skills and problem-solving abilities, and unleash creativity. Here are summaries of some of this research:

"Crisis in the Kindergarten: Why Children Need to Play in School," released by the Alliance for Childhood in March 2009, reports on what the document calls "the crisis of play's disappearance" from early-childhood education. Under pressure to achieve academic gains, many schools have replaced the freewheeling play of kindergarten with scripted lessons that focus on literacy and math skills. The alliance calls for "a national movement for play in schools and communities." (Download a PDF of the report at the Alliance for Childhood's site.)

The American Academy of Pediatrics, in its 2006 report, warns of what the comment refers to as a "hurried and pressured" lifestyle cutting into children's time for free play. The academy urges time and opportunities for what it describes as "active child-centered play" to foster children's physical, social, and emotional well-being. (The report is available at the Academy's Web site.)

Americans face an equity issue when it comes to playgrounds and parks. "The Benefits of Parks," a white paper from the Trust for Public Land, describes many urban neighborhoods as "park poor," especially in low-income communities with large numbers of recent immigrants. Children without access to places to play suffer higher levels of obesity, diabetes, asthma, anxiety, and depression. (Register to download a PDF of the white paper from the trust's Web site.)

Scientific American surveys recent research about play in the article "The Serious Need for Play," in which author Melinda Wenner explains why kids need time for rambunctious "free play," and not just recreational activities that adults organize, to develop creativity and social skills.

Boston College psychologist Peter Gray explains in Science Daily why self-organized play allows children to learn to get along with diverse others, to compromise, and to anticipate and meet others' needs. According to Gray's studies, healthy societies cannot afford to "forget how to play."

Suzie Boss is a journalist based in Portland, Oregon, who blogs about the power of teaching and project-based learning at Edutopia.org.