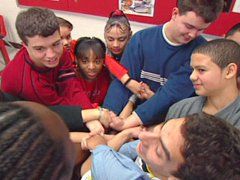 Whether it's in the boardroom or the classroom, individuals need the skills to communicate, work in teams, and let go of the personal and family issues that get in the way of working and learning. Such skills add up to what is known as emotional intelligence, and they are even more important as educators realize that these skills are critical to academic achievement.

Emotionally intelligent individuals stand out. Their ability to empathize, persevere, control impulses, communicate clearly, make thoughtful decisions, solve problems, and work with others earns them friends and success. They tend to lead happier lives, with more satisfying relationships. At work, they are more productive, and they spur productivity in others. At school, they do better on standardized tests and help create a safe, comfortable classroom atmosphere that makes it easier to learn.

Psychologist and author Daniel Goleman popularized the term "emotional intelligence" in his landmark 1995 best-selling book of the same name. What emotional intelligence is, says Goleman, "is the capacity for recognizing our own feelings and those of others, for motivating ourselves, and for managing emotions well in ourselves and in our relationships." Or, as Maurice Elias, Rutgers University psychology professor, puts it, "It's the set of abilities that helps us get along in life with other people in all kinds of life situations." He calls it the "missing piece" in American education.

Jonathan Cohen, president of the Center for Social and Emotional Education in New York, argues that attributes like self-awareness and empathy play a huge role in every aspect of life. "We all know that how we feel about ourselves and others can profoundly affect our ability to concentrate, to remember, to think, and to express ourselves," he says. Kids without emotional intelligence "don't follow directions, continually go off-task, can't pay attention, and have difficulty working cooperatively.

Social and emotional learning, the increasingly common term for emotional intelligence instruction, can be a lesson on the hurtfulness of put-downs followed by discussions on ways to communicate "put-ups." It can be a regular morning meeting, in which students share such personal feelings as the pain of their pet dying or the joy of a family outing. It can be an analysis of a conflict in great literature and a discussion about different paths the characters might have taken. It can be a common plan to take a moment to think, rather than react automatically, and often aggressively, to distress. It can be a districtwide commitment to community service. It can be a software program that lets students get a clearer idea of their reactions to risky situations.

Many educators say they are gratified by the results of such instruction in their schools because of its effect on both the school environment and academics. Fifth-grade teacher Grace Wiesner calls the transformation in her Waldport, Oregon, classroom "miraculous." "Disruptions due to acting out, arguing, or talking back have been significantly reduced," she says. Tina Valentine, a fourth-grade teacher at Kensington Avenue School in Springfield, Massachusetts, agrees. "I find I'm not spending as much time with behavioral management issues, so I actually have more time to spend with academics." A number of studies also have found a correlation between social skills and academic achievement.

Instruction in emotional intelligence is not a quick fix or a one-time lesson. The best programs, says Elias, "take no less than three years" to get to a place where teachers are comfortable and students are showing the benefits. Cohen adds that while a growing number of school programs include elements of instruction aimed at a child's emotional needs, too many of those programs are fragmented, short-term, and not well-integrated into the regular curriculum or school structure. "Just as we don't expect kids to learn a language in a year, we don't expect kids to learn social and emotional skills in one year," he says.

Parents need not fear that emotional intelligence translates to a set of values that may be affiliated with religion. "We're not really teaching values. We're actually teaching skills," says Linda Lantieri, cofounder of the Resolving Conflict Creatively Program, one of the longest-running conflict resolution and social and emotional learning programs. "They're almost like tools in a toolbox. I remember one parent saying to me, 'You know, in my place of worship, I teach my kid to be honest. But you give the child the skills to be that way.'" The character education movement, which promotes universal values like respect, honesty, justice, and compassion, is also closely aligned to social and emotional learning.

Social and emotional learning programs work best when parents and teachers are partners, and that means schools need to train both parents and teachers in ways to promote behavior that improves communication, empathy, self-awareness, decision-making, and problem-solving. Parents, educators, policymakers, and business people all have a role to play in supporting the social and emotional learning of schoolchildren.

"We're talking about a whole new vision of education that says that educating the heart is as important as educating the mind," says Lantieri. Rutgers' Elias puts it another way. He says that parents don't just want SAT-smart kids. They want kids who are also responsible, non-violent, and caring: "We want the whole package."