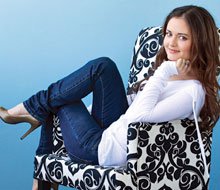 In 2007, she spread the message that math doesn't have to be painful to students, especially preteen girls, through her friendly introduction to middle school math, Math Doesn't Suck: How to Survive Middle School Math Without Losing Your Mind or Breaking a Nail. She reinforced this message in 2008 with Kiss My Math: Showing Pre-Algebra Who's Boss; both books were New York Times best sellers. McKellar also talks with fans about math topics in a forum on her Web site and is involved in children's charities, including Math-A-Thon, for which students help St. Jude Children's Research Hospital by collecting sponsors and solving math problems.

Someone who finds that careful balance: kind enough to feel like an ally, but tough enough to be respected by teenagers.

In the seventh grade, I was a really stressed-out kid. One day, I totally panicked on a math quiz, and even though I had studied really hard, the quiz was blank when the bell rang. Blank!

I wanted to cry. My teacher, Ms. Jacobson, let me have a few extra minutes during recess to relax and keep working on it. I'll never forget that gift. It was a turning point for me; my grades and confidence began to really improve.

I went back and forth between a private all-girls school and tutoring on the set of my television show.

Where did you fit in your school's social hierarchies?

I was never in the popular group. My friends were the nice girls who tried to be good students. We had fun, too, but hardly ever broke the rules. I think we were afraid of getting in trouble.

That schools would stop trying to push hard math concepts earlier and earlier -- it just makes math seem that much scarier, and it doesn't have to be.

With good teachers, nothing.

What should they teach that they don’t teach now?

More creativity in the classroom -- we need more music and art, and also more silliness and fun in math and science. Why shouldn't all classes feel a little bit like kindergarten?

I helped my brother with his eleventh-grade chemistry homework.

Um, probably something like Math Doesn't Suck, or maybe Kiss My Math.