The clouds are still thick from recent rain as nineteen students board a bus outside Vergennes Union High School (VUHS), in rural Vergennes, Vermont. They leave cement-block walls and linoleum-tile halls that conjure images of The Breakfast Club and other movies about high school to ride for fifteen minutes past rolling green hayfields and stands of bare trees, sagging barns and modest ranch houses. When they get off the bus on a country highway, four of them stop to pull kale and tall leeks from a garden for the day's lunch. Then they follow the others 500 feet down a soggy trail to the grove of red cedars that is their classroom.

As they gather in a circle, teacher Julia Bunting suggests they introduce themselves to several guests by playing a name game: The students will take turns telling what they want to be when they grow up. Jamison "Jamo" Bannister, a skinny sophomore in a black leather jacket, looks at her disbelievingly and says, "What do you think this is -- school?"

The Walden Project is not school in the traditional sense. It is a community of nineteen students and two teachers who use this former farmland for what the founder calls a "great, living template for education." They spend three days a week outdoors, through fall, bitter winter, and spring. On Tuesdays, for Field Sociology class and writing, the students visit government offices, nonprofit organizations, and other institutions in Burlington, a college town of 40,000 located 20 miles away.

On Fridays, they work at internships in their areas of interest, such as Web design or photography.

Matt Schlein, who had taught English, drama, and psychology at VUHS for six years, founded the project in 2000 with a vision of authentic, student-directed learning based in nature. He created a small foundation, Willowell, and collected grants and donations to buy the 230 acres Walden Project participants call simply "the land" -- a swath of sloping fields spotted with woods and ringed by the Green Mountains. About twenty to twenty-five students attend each year.

The educational model springs from Henry David Thoreau's semihermetic experience at Walden Pond in the 1800s, when he abandoned conventional work for two years and immersed himself in the outdoors. "I went to the woods because I wished to live deliberately," Thoreau wrote in Walden, "to front only the essential facts of life, and see if I could not learn what it had to teach, and not, when I came to die, discover that I had not lived."

The point, Schlein says, is to step outside the chaos of everyday expectations to "think deeply about where I am right now and what's essential," searching nature and oneself for inspiration. Though he can name private programs that base their education in the local environment, such as central Vermont's Mountain School and the Island School, in the Bahamas, he knows of none so rooted in Thoreau's transcendentalism.

Schlein, who has a full red beard and an actor's energy, covers the English and social science portions of the curriculum. Julia Bunting, the science teacher, has blue eyes and a gentle demeanor that belies her ruggedness; in summer, she leads whitewater-raft trips through Canada's Yukon and Northwest Territories wilderness. Their program is a satellite of the 680-student VUHS, funded by the school within its regular per-pupil budget.

Starting in their sophomore year, students may choose to spend up to three years, depending on their level of interest, in the Walden Project. (For upper-level math, physics, or chemistry courses, which the curriculum omits, students must go to community college or return to the high school for those classes.) Some teens come here to escape the rigidity of regular school, while others just want the experience; all learn about environmental science and literature, and how to think for themselves.

On this morning the teens amble over soft, needle-strewn ground to sit in a circle of rough benches, discarded office chairs, and an upholstered seat from a van. About 40 feet away stands an A-frame shanty built with the limbs of on-site trees lashed together with rope and covered in donated maritime sails. On the most frigid days, the group takes refuge inside.

Nick Cormier, a blond-bearded senior, starts class with a daily reading of an excerpt by Thoreau or other transcendentalists. Today, it's from Civil Disobedience. A vigorous discussion follows on whether it is better to work with or against government to create change.

For another hour or so, the group continues with Foundations in Social and Systems Theory class, casually called "Newsy Notes," in which students toss out topics from current events for discussion. An exercise that could unravel into chaos is kept cogent and purposeful by the teachers' gentle steering and the students' sophisticated arguments, which they lace with references to history, philosophy, and literature. Their voices mingle with the sounds of birds' screeches and, less frequently, the gunshots of not-so-distant hunters.

Credit: Angie Beaulieu
Nature and Nurture: Julia Walsh, also a senior, reads to her classmates from Dr. Seuss's The Lorax. 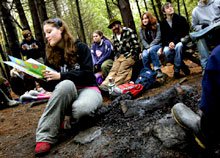 Credit: Angie Beaulieu
Nature and Nurture: Julia Walsh, also a senior, reads to her classmates from Dr. Seuss's The Lorax.

Sitting in a circle in these woods, there's no space for whispering or passing notes, only listening. There are no hall passes; when students need a break, they walk away. Sometimes this freedom frustrates sophomore Kate Houskeeper, who feels it allows some of her classmates to be rude. Yet when you're face-to-face with peers and teachers, who all know just how hard you're working -- or slacking -- there's no hiding in the back of the classroom, either.

"You can't bullshit your way through this," says senior Chris Newton.

Houskeeper at first felt overwhelmed by the flexibility at Walden, where students must invent their own projects and make progress on yearlong portfolios without daily assignments. Comparatively, she says, the structure of regular high school was familiar and comforting.

Indeed, a stranger visiting Walden could be dismayed by its seeming anarchy. Students rarely take notes. They curse. If one is distressed by personal problems, he or she may leave class to spend time in the woods alone. The teens have to combat perceptions among students and teachers at VUHS that Walden is a place where the "bad kids" go, or even, according to one of the most extreme rumors, where they sit around the fire smoking pot. However, Newton -- speaking for many of his classmates -- says, "From an outsider's point of view, we don't have a lot of structure, but we just have a different definition of structure, and I feel like we're learning more by doing it that way."

What they're learning, students say, is as much about science and writing as self-direction and a love of learning. Given license to pursue his own interests, one boy several years ago built a dugout canoe. At least a half dozen students have entered Walden determined to write a novel, and the teachers have encouraged them; though none has finished more than a chapter or two, Schlein says, "to attempt to do something grand and fail -- that's great learning."

Great enough, in fact, that despite Walden's unconventional approach, its students' performance on the SAT matches that of their peers in VUHS's regular program. And whereas just over half of the high school's graduates go to college, 80 to 90 percent of Walden grads do.

Alumna Kelsey Stetson, now an education major at the University of Vermont, says, "I joke that Walden saved my life from mediocrity. It allowed me to not just go for the grade but to also take full part in my education."

The vision of Matt Schlein buzzes with life.

As lunchtime nears, Newton cuts kindling from a log to start a fire while Bunting introduces the Wildlife Biology lesson. The course builds in literal levels from the geology of the rock underneath "the land" to the soils on top of that to the vegetation, wildlife, and atmosphere, culminating in a site-specific environmental-restoration project of the teens' design. Each student must also do a land-management project. Bannister, for example, planted a field and a grove of trees and is making duck houses.

Today, it's Julia Walsh's turn to teach a class, about her beekeeping project. Her classmates tramp out of the woods into a wet hayfield where the hives are and ask questions as she tries in vain to smoke the bees into submission. The students stay back -- way back -- while Walsh pries out a wooden honeycomb frame and several dozen angry bees swarming around her. Then, standing safely 50 feet from the hive, her classmates crowd around her to eat gobs of gooey honeycomb off their fingers.

These hands-on science lessons partly explain why VUHS principal Ed Webbley is one of Walden's biggest fans. Through its inquiry-based approach, he says, Walden satisfies state content standards in greater depth than a conventional classroom could. The program also far surpasses the high school on teaching the state's "vital results" standards for personal growth, he adds. "Instead of reading sixteen chapters in a science textbook," says Nick Cormier, "we do science."

Beyond the curriculum, Webbley admires how the program nurtures kids who "bounced off the four painted walls in high school." He's seen students with severe emotional disturbances, "state-of-the-art prep-school kids," and "square pegs in round holes" all flourish here. "They feel like they can breathe," he says. "They feel like they belong -- not only to each other but to nature, too."

The strength of these connections attracts many teens grappling with trauma; past drug addiction and loss of a parent are common. Julia Walsh, for one, found in Walden her salvation from hopelessness and crystal methamphetamine. "You can't be a number here," she says. "You can't fall down and not have anybody notice and help you pick yourself up."

For students without serious traumas -- and there are at least equal numbers of them at Walden -- the intimate quarters still bring them close to peers they would otherwise never know. Like any family, the Walden denizens have their spats, but as Schlein points out, rivalries are hard to sustain when you're all cold and huddled around the same fire. 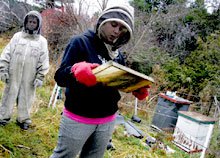 Returning to the cedar grove, the class digs into a smoky stew of potatoes, leeks, onions, black beans, and red peppers prepared by Schlein on the campfire. Students and teachers alike eat from ceramic mugs and plastic cups and off pieces of cardboard or even strips of bark -- whatever they can find.

Schlein begins Psychology/Philosophy/World Religions class while throwing kale into an iron pot on the campfire. He reviews the divide between Freudian and behavioral psychology before launching into the classic theories of child development.

"Kale's done," he says about ten minutes into the lesson. The teens eagerly pull leaves from the pot by hand and munch away while Schlein keeps teaching. The students take no notes, but they ask good questions. Chris Newton offers the critique that the theories of Erik Erikson and Jean Piaget are biased toward Western values. Lizzie Werner-Gavrin asks why some people skip developmental stages due to trauma.

About forty minutes later, at 1:45, the students and teachers rise and start back up the muddy path to the yellow school bus, to heat and electricity and household chores. They leave their mugs hanging on trees for the next vegetable stew. A small pile of kindling also remains, ready to spark a campfire -- and imaginations -- when next they return.

Go to "How to Make Learning Local."