Credit: Angie Beaulieu
Inner Circle: Students in the Walden Project attend class and eat lunch around the fire in this red cedar grove. 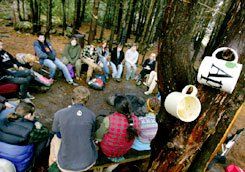 Credit: Angie Beaulieu
Inner Circle: Students in the Walden Project attend class and eat lunch around the fire in this red cedar grove.

This how-to article is accompanied by the feature "Outside In: The Walden Project Helps Students See the Forest for the Trees."

As Walden Project graduate Kelsey Stetson says, it's almost as if the fields and trees outside Vergennes, Vermont, were waiting for a nature-based education program like Walden.

Yet educators anywhere can broker this marriage of location and learning, even without 230 acres of Vermont farmland. Emily Watson-Blagden, an AmeriCorps VISTA member who helps at Walden, included a case study of place-based education in her bachelor's thesis at Hampshire College. She says place exists everywhere when you are willing to stretch the concept beyond the physical environment to the community.

"It's a scale, starting with the small and immediate and close," she says, "like starting with the temperate forest that's right near your school as a way to understand a tropical rain forest," or using a shop down the street to comprehend the larger forces of commerce.

Watson-Blagden says the concept of place-based education has taken root over the past ten to twenty years, fueled, in part, by Annenberg Rural Challenge grants, launched in 1995 to improve rural schools by linking them more with their communities. The Rural School and Community Trust, which emerged from the Annenberg initiative, defines place-based education as learning grounded in "the unique history, environment, culture, economy, literature, and art of a particular place." In this model, according to the trust administrators, "student work focuses on community needs and interests, and community members serve as resources and partners in every aspect of teaching and learning."

This kind of education engages students, says Walden founder Matt Schlein, because the real, local connection helps answer the students' perennial question "Why are we learning this?"

How Educators Use Place as a Locus for Learning

in Portland, Maine, leads its 500 students through a series of eight- to twelve-week experiential-learning expeditions each year. The projects span multiple disciplines, involve the community, and demand that students conduct research and present their products to legitimate audiences. For instance, a group of sixth-grade students this school year did an expedition on mapping, which included surveying local forests, receiving guidance from professional cartographers, and creating thematic maps of their own lives. Another group of sixth graders studied the relationship between food and culture, visiting local ethnic restaurants to sample menu items and planning a school garden.

a local-development organization in South Dakota, is recruiting teens to help revitalize the rural county, which is strained by unemployment. With a grant from the federal Department of Health and Human Services, the organization has asked students to conduct local interviews, surveys, and data analysis to create strategies for such efforts as promoting organic industry and combating poverty. In Corsica, a city of 625 people, high school seniors research the potential for a local housing collaborative as part of their capstone project. Rural Roots, the newsletter of the Rural School and Community Trust, says these seniors ultimately will present a proposal and work with city planners to help make the plan a reality.

turns high school students in Arizona and Montana into local historians. Project leaders in each state help the teens conduct oral history interviews and other research to chronicle local heritage. The students examine such questions as the significance of the land for the people of Arizona's Colorado River Indian Tribes Reservation, how the wives of military men stationed in the Arizona Territory contributed to their community, and how residents of Libby, Montana, responded to the influx of people during the construction of the Libby Dam. Students finally create exhibits and multimedia documentaries, which are displayed and archived in local museums and at the Library of Congress.