Imagine a high tech, state-of-the-art science lab on wheels, one that provides teachers with tools for coordinating school programs and projects and allows them to share with kids the fun and mystery of science, technology, engineering, and math (STEM).

Imagine the look on children's faces as they are introduced to this rolling resource in the parking lot of their neighborhood school. 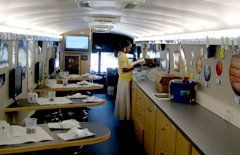 This is wishful thinking, particularly in urban school districts, where tough fiscal choices are decided every day. But this lab is not a dream but a reality: The Fattah Learning Lab, sponsored by Philadelphia's Educational Advancement Alliance, is a former passenger bus converted to a virtual science center complete with computers, laboratory equipment, and a sophisticated audiovisual system. Named in honor of Chaka Fattah, who represents much of Philadelphia in the U.S. House of Representatives and has been in the forefront of progressive educational polices and programs in Pennsylvania for nearly twenty years, it rolls up right to the doorway of Philadelphia schools.

One of the lessons taught by Learning Lab staff teacher Lucilla Ralfa when I visited recently was about erosion: After a lesson about the concept, the students, inner city children in grades 4-6, were given dirt, sand, pebbles and rocks to make a model of a mountain that would stand up to a hurricane.

When I taught NASA Quest lessons on the bus, one schoolteacher got on her feet and helped. She was so excited about the lessons, I thought she was going to cry. It made me feel sad that professional development to teach dynamic lessons such as these has not been available to her. She asked about how to receive NASA resources, and I promised to connect her and her colleagues with the people I know at NASA.

In the lessons I gave on the Learning Lab bus, I sometimes used clips from films in the Star Wars series -- which many of the students had not seen -- to teach them about using their imagination and to show them how media works, and I ended up leaving the movies on the bus so other teachers could use them. I also used them to lead up to NASA's Future Flight Design activity. In addition, I reviewed with the children the difficulties the airline company Jet Blue was having at the time with canceled flights and disgruntled passengers to lead into the NASA lesson called the Air Transportation Problem.

When we surveyed the students about their experience, one little girl said she wished she had a million dollars so she could visit the bus every day and continue to learn science, and she begged us to stay a few more days. It was a little heartbreaking to see how the children embraced science and then have to say good-bye to the bus staff.

I write about teaching, but I don't often get a chance to actually teach. This was an extraordinary experience. During that week, there was a lot of violence in Philadelphia schools -- one teacher who took an iPod from a student had his neck broken -- but we had no trouble at all. The children were thrilled to be invited into the Learning Lab. Their main complaint was that the lessons were over too soon -- they were always asking if we could do just one more, and, at the end, they asked us to come back and teach them again soon.

Teaching urban children STEM subjects is essential. According to the National Action Council for Minorities in Engineering, skills in these areas are particularly lacking among minority students; only 6 percent of blacks and Latinos, for example, take precalculus or physics in high school. We need to work with our schools to improve these levels of participation.

It is not widely known that Albert Einstein championed high-level STEM education among black children and actually did outreach activities with them. I like to think that in the last few days of Black History Month, I was following his lead. In addition to his statements on the subject you will find at the link above, Einstein said, "Contact between the intellectual and the masses must not be lost. It is necessary for the elevation of society and no less so for renewing the strength of the intellectual worker, for the flower of science does not grow in the desert."

Here are some resources I used in my lessons:

Kinetic City
A collection of science experiments and other activities.

Plane Math
A curriculum on math and aeronautics designed especially for children with physical disabilities.

Windows to the Universe
An online exploration of earth and space sciences.