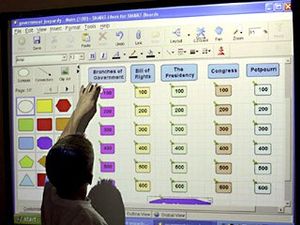 Photo Credit: Henry Horenstein
When Daniel Cecil was named lead architect for Kennebunk Elementary School in 2001, he took the school's motto, "Look through the eyes of a child and see the wonders of the world," to heart. He also took it literally. "One of the first things my colleague Mark Lee and I did was walk on our knees in our office," says Cecil, of Harriman Associates, in Auburn, Maine, when recalling his early work on the K-3 school, which is now two years old. "We wanted to see what things look like from a child's perspective."

Today, that slogan -- prominently displayed in block letters on the muted green wall in the school's spacious entryway -- sets the child-centric tone felt throughout the 102,400-square-foot-campus, situated on 70 acres of lush woods in Kennebunk, Maine. 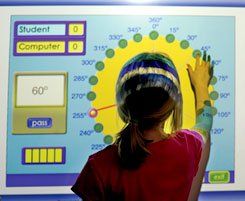 For Cecil, understanding a kid's world didn't end with examining it from a kid's point of view. He also asked kindergarten teacher Cindy Hayes, then principal of another elementary school in town, to measure the eye-level height and vertical reach of her school's shortest and tallest students.

Those measurements -- as little as 40 inches high and as much as a 50-inch reach -- became a gauge for Cecil in determining the height of bookshelves and display cases, drinking fountains, sinks, door handles, and, perhaps most importantly during the long, dark months of Maine winters, the windows.

Every classroom has at least four oversize windows, and whether they look out from within or in from outside, the sights are inspiring. For instance, a view through the windows of the gym door just off the main lobby reveals a 6,900-square-foot space with shiny maple floors, a rock climbing wall, and a large stage with a window for a backdrop. From the inside out, students in any classroom can see a rich mix of trees, including apple and cherry, as well as a garden that doubles as an outdoor classroom for botany and biology lessons. 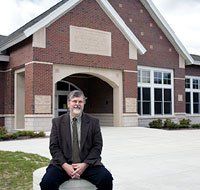 "Children learn best through firsthand experience," says Hayes. Due in part to this belief, the building committee ditched its original plan for a two-story structure in order to keep kids' eyes on the world around them. "We wanted to incorporate nature and take advantage of the wooded setting," she adds. "Because it's all at ground level, there's a view outside every classroom. And it's certainly not a view of a parking lot."

The point of all this attention to detail, explains Cecil, is to create a building for and about children. "I'm thrilled to be in this building," says third-grade teacher Barbara Thyng. "It honors both students and the educational process." 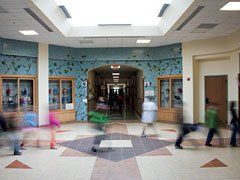 Even on a day of unrelenting rain, there is ample natural brightness in the classrooms and hallways. In addition to windows, large clear-glass skylights in the corridors add to this cheeriness by allowing light to flood from above. This ambience seems to be reflected in students' upbeat attitude about their school. "I like the way you can hear the rain," says Brandon, a third grader. Nine-year-old Katie chimes in, "I like to see the rain splash in puddles. Once, we saw turkeys, too." 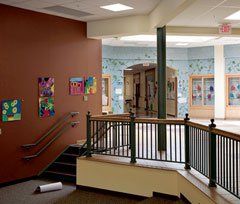 The students' connection to the outside world extends past reality to virtual reality. Interactive whiteboards from Smart Technologies in each classroom link to the school's computer network and wireless Internet connection -- another way of alleviating the claustrophobia of winter in New England.

Computer labs, also with Internet capability, are in each of the building's three wings, which are referred to as villages. Each village, consisting of 160 students from all grade levels, branches off from a large atrium just down the hall from the main lobby and other common facilities, including the gym, the cafeteria, the library, and the administrative offices. (As is the case with many of today's new schools, the community at large also utilizes the common areas; see "Getting Beyond the School as Temple: What Do We Expect from Our Schools?".)

"The villages are a way of trying to create a smaller feel," says Hayes about the architectural strategy for enhancing the feeling of intimacy in a school with 480 students. The entrance to each village contains display cases for student work -- one way to make a school environment relevant to the students, explains Cecil. 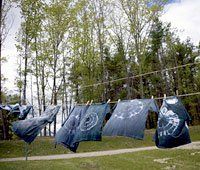 "Students must also be able see themselves in the building," he says. "Images of kids must be visible throughout."

To this end, whimsical drawings showing children relaxing in nature and animals participating in games -- rabbits playing hopscotch, beavers bouncing on seesaws, and bears gliding down slides -- are found in most common areas. Like the windows and skylights, earth-tone color schemes and nature-oriented themes bring a sense of outdoor wonder inside the school when the days are short, the sun is scarce, and the snow piles up.

Cecil is quick to point out that he didn't design Kennebunk sitting alone at his drafting table. For him, the school -- which won a DesignShare Recognized Value Award in 2005 -- is a collaborative product of everyone involved with the building, from parents, teachers, and students to community leaders, school administrators, staff, board members, and custodians -- all of whom the architects interviewed for input. "The way I have set up our process for designing schools is to make sure everyone who works on this school can, in the end, feel like they have had significant authorship of the project," says Cecil. "One of my definitions of a perfect project is that on opening day, every person involved in the planning can look around the building and see their own handwriting everywhere."