When you think about Jaime Escalante, think about this: Passing Advanced Placement exams is an uphill battle for most students, but for African American and Latino high school kids it can feel like pushing a big rock up that hill. Even though more students are taking the exams, the pass rate is declining. Just 16.7 % of African American students and 41.3 % of Hispanic students scored well enough to earn college credit on the two AP calculus tests given last year. Versus more than 69% for white students.

These numbers make Jaime Escalante's feat at Los Angeles's Garfield High School even more awe-inspiring. The legendary calculus teacher, immortalized in the film, Stand and Deliver, died on March 30th after battling cancer. He was 79. 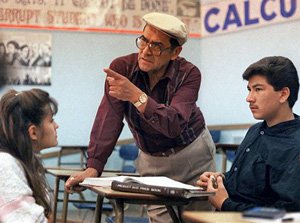 Escalante took a class of predominantly Latino, inner-city students, whom others said couldn't learn, and taught them to master calculus. He did so well, that in 1982 every student in his class nailed AP Calculus, nearly half with a perfect score.

That led to a much-publicized scandal where the College Board suspected cheating, invalidated the results, and made the students re-take the test. There were hard feelings and not all the students took it again, but those who did, all passed the second time around.

How did he do it? "He wouldn't budge on his expectations," said Thomas Valdez, who had Escalante for math class from 1989 through 1991. Valdez, now a senior member of the engineering staff at NASA's Jet Propulsion Lab, describes himself as one of Escalante's weakest students. "That poor man, I really put him through a lot."

Valdez has had many math and science teachers since high school - he's about to earn his Ph.D. - and says he's still blown away by all that Escalante accomplished. "My calculus classes in college were a joke compared to what I had gone through with him."

Valdez visited his mentor in the hospital a few weeks ago, and says he told Escalante how grateful he is that "even when he had a hard case like me, he stuck with me." He laughs and says it's no exaggeration. " He basically was just there at my side every minute."

His toughness didn't always sit well with fellow teachers, especially when he supported California's Proposition 227, the 1998 ballot measure that banned most bilingual education programs. He left Garfield High amidst some ill will. But there's no question that his methods worked. U.S. Secretary of Education Arne Duncan issued a statement praising Escalante's doggedness. "His life provides yet one more reminder of the many teachers who work zealously every day to open the minds and doors of opportunity for students."

To read more about Jaime Escalante's life and legacy, and about the AP exam, here are some additional reports and articles:

Website of actor Edward Jame Olmos, who portrayed Escalante in Stand and Deliver.

Edutopia, 2006 brief about the movie

College Board AP Report to the Nation Feb. 2010