Most twenty-first-century public schools in the United States are structured pretty much as schools have been since the nineteenth century. And yet real life in America has changed dramatically since that time: We've gone from an agricultural and industrial economy, with the majority of the population living in rural areas, to a hyperfast, dynamic global society centered on the development and exchange of knowledge and information in a multiplicity of forms.

Once, a person might master a certain trade or skill and stick with it for most of his or her life. Today, in the ever-changing world of our information economy, individuals prosper who are fluent in several disciplines and comfortable moving among them, capable of distilling meaning from complexity, and adept at seeing connections where they may not be immediately apparent. Creativity, adaptability, critical reasoning, and collaboration are highly valued, marketable skills. Sadly, our K-12 educational institutions have not kept pace with this seismic shift in our society.

"In schools, subjects tend to be hermetically sealed off from each other -- you do science on a Thursday morning, you do math in the afternoons," says Sir Ken Robinson, author of Out of Our Minds: Learning to Be Creative and an international leader in educational reform. "And this is really a feature of education, because outside of education people know naturally that all these things flow in and out of each other, disciplines affect each other." 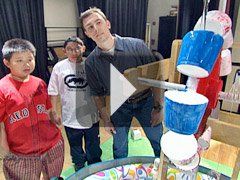 "In schools, subjects tend to be hermetically sealed off from each other -- you do science on a Thursday morning, you do math in the afternoons," says Sir Ken Robinson, author of Out of Our Minds: Learning to Be Creative and an international leader in educational reform. "And this is really a feature of education, because outside of education people know naturally that all these things flow in and out of each other, disciplines affect each other."

"By and large -- both in public and independent school education -- there is still a tendency to focus on the disciplines separately, and, frankly, there's a lot of value in that," says Heidi Hayes Jacobs, a highly regarded education consultant, president of Curriculum 21, and author of several influential books on improving K-12 education, including Interdisciplinary Curriculum: Design and Implementation and Active Literacy Across the Curriculum. "There's great value in going deeply into a subject and learning the tools and the approaches that are used by specialists in those areas," she adds. "But in practice, there's almost no profession in the world of work where there aren't integrated perspectives."

Citing several dozen sources, Mathison and Freeman said all agreed that the "positive educational outcomes" for students in an integrated-studies program include

Fortunately, today many educators -- from teachers to administrators -- as well as policy makers feel the same way. Since the mid-1990s, in addition to Sir Ken Robinson and Heidi Hayes Jacobs, several key figures have stoked the discussion of integrated studies through their own work and influential books, including James Beane, author of Curriculum Integration: Designing the Core of Democratic Education; Julie Thompson Klein, author of Crossing Boundaries: Knowledge, Disciplinarities, and Interdisciplinarities and Mapping Interdisciplinary Studies; and Robin J. Fogarty, author of How to Integrate the Curricula and Integrating Curricula with Multiple Intelligences: Teams, Themes, and Threads (the latter coauthored with Judy Stoehr).

Though the wealth of scholarship on the subject of integrated studies provides rich informational resources for educators who want to bring these approaches to their schools, the acceptance of integrated studies has also been helped along by the fact that the practice itself has become better assimilated into mainstream ideas of modern education. "In the past, there was this polarization," Jacobs says. "It was 'Should we integrate the curriculum?' versus 'Should we have separate disciplines?' Now we're taking a much more sensible approach. For example, you'll now see courses on environmental science that deal with science but also with law and legal issues. Some state standards are going out of their way to formally build in more interdisciplinary linkages. It's not the debate it used to be."

A Reflection of the Real World

One shining example of Jacobs's assertion is the success of San Diego's High Tech High, a place where interdisciplinary curriculum and project learning have propelled 100 percent of its graduates to college acceptance; 80 percent of those enroll into four-year institutions. Larry Rosenstock, High Tech High's founding principal and now CEO, admits he had to combat some skepticism when he, along with a coalition of business leaders and educators, established a single charter school in 2000. (High Tech High now consists of a network of five high schools, two middle schools, and one elementary school.) "At first, parents were saying, 'I don't know about this. I don't know if they're going to get into good colleges.' The success of the school and its students quieted those concerns.

"The school's approach is not an end in itself," Rosenstock adds, but rather "a means of restructuring the American high school experience for kids." What students learn at a school like this, and how they learn it, more closely resembles the varied ways in which any of us acquire knowledge and apply skills in the experientially kaleidoscopic real world.

"Our daily life and work are not stratified into "the math part, the science part, the history part, and the English part," Rosenstock points out. "Kids don't experience the world that way." Instead, they live in a truly interdisciplinary fashion.

To ensure ongoing progress and monitor quality, a constructive feedback system is critical for any integrated-studies program based on project learning -- for both student and teacher success. It's essential, Rosenstock emphasizes, that student work is presented to an audience -- not only fellow students but also teachers and parents, as well as professionals in the disciplines the project focuses on -- and assessed. That way, he says, "you build into the school a system, a cycle of improvement."

Effectively assessing student performance in an interdisciplinary program is crucial, but in practice it can be complex. "The types of tests or findings people use to research student performance tend to primarily be comparative studies that deal with criterion-referenced examinations or standardized examinations based on reading," Jacobs says. "Most evaluation tools are discipline based." One of the overarching goals of integrated studies is to teach students to be better thinkers. "And that's a tough one to measure," she says. "It's tough to quantify."

The hopeful news is that as more schools offer integrated studies, broader, more substantive forms of assessment -- testing that more accurately reflects authentic development in student thinking and performance -- may, out of necessity, come into use.

Employing integrated studies brings together diverse disciplines in a way that enables students to have a meaningful understanding of the complex associations and influences within a topic. It facilitates the presentation of subjects in a comprehensive fashion that illuminates their connections, rather than, as James Beane has put it, "a set of fragmented, unrelated topics." A happy by-product of this approach is that it tends to simply make school more interesting for both students and teachers.

A Field Guide to Success

As an example, Rosenstock points to a series of field guides about San Diego Bay, authored by High Tech High students, the first of which, Perspectives of the San Diego Bay: A Field Guide, was featured in the Edutopia magazine article "It Takes a Village: Teenagers Use Community Resources to Pen a Guidebook." The students work with a team of the school's biology, math, and humanities teachers to research, edit, and produce the books. So far, five have been published to excellent reviews.

"They integrate math, science, and social studies issues," Rosenstock says. "Jane Goodall writes the introductions. And E.O. Wilson, the famous biologist from Harvard, got in touch."

"He's writing the intro to the next one," Rosenstock continues proudly. "The series is being recognized by real scientists. I always say to teachers, 'If you want to know how we're going to judge your performance, it's by the quality of student work. Is it something worth doing? Is it something worth learning? And does it have lasting value?'"

Although integrated studies is not a new idea (it's been around in one form or another for nearly a century), the approach does seem to have attracted newfound acceptance in recent years, thanks to effective advocate-practitioners like Jacobs and Rosenstock and the positive examples set by the many on-the-ground success stories coming out of schools across the country. Still, getting a majority of U.S. schools to adopt interdisciplinary curriculum as standard policy is not without significant challenges. There are plenty of systemic roadblocks to retrofitting the many schools with vertically oriented period structures where subjects are "hermetically sealed off from each other," as Sir Ken Robinson puts it.

Jacobs acknowledges that there is significant work ahead. "The question is, 'How strategically should we design interdisciplinary work?' And, more to the point, the issue is making it operational," she says. "Many schools have siloed high school departments. Even people in middle schools designed in teams don't always use them effectively." And yet, Jacobs adds, a teacher working within a conventional program can do plenty to bring a degree of interdisciplinary richness to the classroom. "When a teacher -- even though he or she may have a required course -- can shift the focus of that course around significant and important ideas or concepts, you'll find that tends to breed more interdisciplinary thinking," she says. And thinking is what it's all about.

Douglas Cruickshank is the former editor of Edutopia.org.

Find tips about integrated-studies resources in this article.