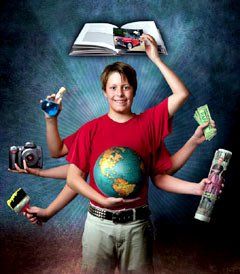 If you're visiting San Diego Bay, you might want to pick up a copy of a striking new guidebook to the biodiversity of the area's intertidal zones and harbors. Leafing through it, you can examine close-up color photographs and scientific descriptions of species ranging from sponges to herons, compare maps by early explorers to those made with the latest Geographic Information Systems (GIS) technology, or reflect on the impact of military and industrial use of the bay on the local environment and culture.

A casual reader might not realize, however, that Perspectives of the San Diego Bay: A Field Guide is the work of fifty-six eleventh graders, who spent last spring researching, editing, and producing its 246 pages. Spurred by a team of three biology, math, and humanities teachers at High Tech High, a public charter school in San Diego, these diverse students -- of widely mixed academic levels and socioeconomic backgrounds -- created the book as the central project of their junior year.

The kids couldn't have done it without help, of course -- and, in fact, getting that help was all part of the project. After joining Jane Goodall's worldwide organization, Roots & Shoots, aimed at youth making a difference in their community and its environment, they wrote a proposal to the national nonprofit organization What Kids Can Do, which funded their basic expenses with a small Student Research for Action grant. As the semester progressed, they arranged training in GIS by a local university research team, plumbed the archives of the city's historical society with help from its curators, and sought scientific advice from experts at the San Diego Audubon Society, the Scripps Institution of Oceanography (at the University of California at San Diego, in nearby La Jolla), and the Los Angeles Natural History Museum.

For these student publishers, who are now busy tracking sales and creating press kits, their project's professional aura and public audience mean more than any A on a report card. "Every kid has that question in class: 'Where am I going to use this in the real world?'" says Evan Morikawa, one of the field guide's chief editors. "Well, you can't get much more real world than this. My friends were, like, 'I'm studying for finals right now,' and I was, like, 'Well, I'm going to make and publish and print and sell a book!'"

Nothing matters more to kids than having people take them seriously -- and nothing achieves this better than work that really matters in their community. By situating important academic concepts and skills in the context of projects and internships, High Tech High gives Morikawa and his classmates what John Dewey, the great pragmatic philosopher and educational reformer of the early twentieth century, called "both magnet to attract and glue to hold" their learning.

Such an approach connects the worlds of school, work, and community, encouraging practical applications of learning both in and across traditional disciplines. It brings together people from these places and from institutions of higher learning in genuine partnerships that benefit all involved. Most important, it casts young people both as leaders, who initiate ideas that take serious knowledge and skills to bring to fruition, and as apprentices, who learn from the experts how to carry out a task to a particular field's standards.

For the past fifteen years, as I have traveled the country writing about change in schools large and small, I have seen students of all ages and descriptions respond to this way of teaching and learning. As soon as kids believe their work has a purpose outside the classroom, their motivation grows and their academic skills increase.

In PS 247, an elementary school in Brooklyn, a class of kindergartners who began the year speaking only Chinese made a partnership with theater artists through New York City's Center for Arts Education; by year's end, they were performing folk and fairy tales on stage -- entirely in English. In the Bronx, fifth graders at PS 205 worked with architects and photographers to design and construct models of animal habitats and gateways for the neighboring Bronx Zoo. Ten years before, that school had received a "failing" label from the state; after commencing the zoo partnership, says the principal, student achievement soared.

The community, too, benefits from an infusion of young people's interest and energy. In the dying prairie town of Howard, South Dakota, young people in a high school business class conducted a cash-flow analysis of the local population's buying habits; it sparked a community-revitalization project, raising local spending by 27 percent and attracting new business initiatives to the area. In the Rio Grande Valley of rural Texas, where half the students at Edcouch-Elsa High School are children of migrant farm laborers, kids are reclaiming their heritage through oral histories, compiling a local business directory, and producing a monthly civic-affairs newsletter in Spanish and English. Coached by a grassroots local nonprofit called the Llano Grande Center, their work quickly won respect and cooperation from city officials.

Students at three New York public high schools designed for immigrants have just collaborated on a compelling book of photographs and first-person accounts called Forty-Cent Tip: Stories of Immigrant Workers in New York City, to be published by Next Generation Press in February 2006. Spearheaded by teachers, the project drew expertise from a teaching artist at the Brooklyn nonprofit organization Elders Share the Arts; the Queens Museum of Art will mount an exhibit of the students'work in January.

Already under the gun because of high-stakes testing, as well as time and budget constraints, some educators flinch at the thought of creating such ambitious real-world projects or coordinating new partnerships with people outside the school. But they can start small, realized Dan Davis, an algebra teacher at Milwaukee Trade and Technical High School, in Milwaukee, Wisconsin. He asked his students, working in small groups, to compare the costs associated with various potential sites for a new city sports stadium and brought in local tax assessors to help them calculate fair market value.

Joan Becker, an American-studies teacher in North Clackamas, Oregon, started by simply adding to her year-end research-paper assignment the requirement that students conduct an interview with someone who has experience or expertise related to their topic. As a result, student interest rose and the papers improved markedly, Becker says. "Connecting intelligent, articulate, real people to their topics validated their research and provided adult role models and mentors for the students," she adds.

Teachers can often gain access to rich and challenging curricula by contacting community agencies charged with addressing public health or environmental issues. In Milwaukee, a neighborhood health center asked a chemistry class at Milwaukee Trade and Technical to help it tackle awareness of lead-paint poisoning among young children. The students learned lead testing and analysis techniques, then analyzed paint samples brought in by elementary students, which led to targeting of specific high-lead neighborhoods in the city. Far from being a drain on the school's resources, the health center served as its de facto science department for that project and increased students' recognition of how much their careful lab work could matter.

As more large high schools nationwide break down into smaller learning communities or schools, many have created "career academies" that organize curricula around themes such as health professions, the law, or the performing arts. These more intimate learning centers provide a natural opportunity to bring outside partners into the schools and place students in workplace settings as interns or apprentices.

At Trenton Central High School, in Trenton, New Jersey, for example, some students in the school's Applied Engineering and Science Academy work directly with the local gas and electric company and with nearby Mercer County Community College to prepare for careers in the utilities industry. Others partner with engineers at the Sarnoff Corporation and with mentors from Princeton University to design and build a working robot to enter in a national competition. Such activities work well because their learning plans and projects -- jointly negotiated by students, teachers, and work-site supervisors -- serve to connect the work students do in their placements to academic content and skills.

Experiences such as this can also dovetail with the senior project now required for graduation in many states and districts, in which twelfth-grade students choose a topic for independent study with an outside mentor, then present a finished product for a juried assessment. Not surprisingly, students often consider learning in such settings to be more important and substantial than the usual school assignments, especially as their "senior spring" makes them impatient with the constraints of the classroom.

Teachers have found that just connecting students with meaningful out-of-school experiences can change the way kids use their minds. Helping out at a nursing home, tutoring early readers, and turning a vacant lot into a community garden all broaden young people's perspective on the world and set them challenging new problems to solve. Many schools offer (or require) such service-learning opportunities; the best also follow up on them. Through writing, discussion, and further research, they make time for students to record, analyze, and reflect on their experiences once they are back in class. That learning reverberates; teachers who facilitate such sessions report kids making new connections between their out-of-school work and academic fields such as social studies, literature, civics, health sciences, and mathematics.

The sixteen-year-old boy who worked on High Tech High's field guide can tell me more about how to use a dichotomous key to identify an unfamiliar animal than I will ever remember from college biology. The Chinese immigrant girl who photographed her mother at a sewing machine, then translated her stories from the factory floor, will become a stronger and more informed citizen because of that -- and perhaps an artist or writer, too. What makes their learning so powerful? How can I feel so sure -- from the confidence of their answers, from the light in their eyes when they speak of their work -- that it will endure?

"In human history, societies always took for granted that the closer the young came to adulthood, the more they kept company with adults," K-12 educator Deborah Meier has said. "For us, it's just the reverse. It won't work." The past few decades have seen a deep body of research from cognitive science that underscores her common sense: We smother learning when we sequester it from the community. We strengthen it when we bring students and adults together -- in whatever ways fit the situation best -- to keep company with each other, ask each other questions, and witness each other's hands and minds at work.

Kathleen Cushman is coauthor, with Adria Steinberg and Robert Riordan, of Schooling for the Real World (Jossey-Bass) and author of Fires in the Bathroom: Advice for Teachers from High School Students (New Press), along with other books with students about their lives and learning.