Two years ago, my middle school bought six iPods. I was a little baffled with the purchase, because we had so many other technology needs the money could have been spent on. Weren't we just indulging a small population in our school that wanted to be able to listen to music?

Then I read "Pod People: Innovative Ways to Use Handhelds in the Classroom," "Visual Acuity: From Consumers to Critics and Creators," and "Synching Up with the iKid: Connecting to the Twenty-First-Century Student" at Edutopia.org and learned about wonderful things being done with those little MP3 players. The ideas began to roll in. 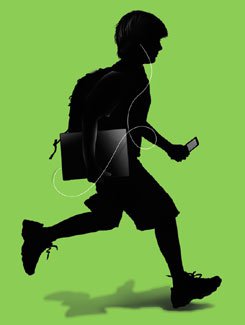 Our first iPods were the basic models, which had an iTalk microphone attached to the top. We began by using the recording feature right away. Students recorded interviews for a their social studies projects. They made digital stories based on poems they had written and used the iPods for getting the sound into their iMovies.

Then I started using them to record student responses while giving individual reading tests. Audio books downloaded to the iPods have also been popular with students. By the end of the year, we had moved on to podcasting. One English class did a weekly podcast of the class newsletter for parents.

It wasn't too long before we realized we needed more than six iPods, so, at the end of the school year, we ordered six more. This time, we got the video iPods. They were invaluable to me as short-term storage for iMovies that had to be transferred from one computer to another. (I have yet to use any of them for music.)

Their potential for helping kids learn through the tools they are so familiar with is limitless. One of my children is moving to New York next week to go to graduate school. I asked him whether he thought he would have any trouble getting around in the big city. He pulled out his video iPod and showed me where he had downloaded all the maps for the subway system. "I'll be fine, " he said holding out his iPod, "as long as I have this."