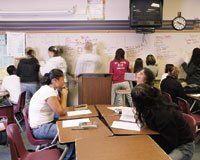 Like many 16-year-olds, Amir Ali spends a lot of time after school talking with friends about sports, girls, and music -- specifically, hip-hop music. But last year, during his sophomore year at Lynwood High School, in Lynwood, California, Ali noticed a drastic shift in these spirited afternoon after-school conversations.

"Suddenly, everyone wanted to talk about English class," Ali remembers. "A friend even said she was looking forward to English class the next day. It was never a class you looked forward to."

The difference? Remarkably, Ali's friends' sudden conversational shift is the result of one man: Alan Sitomer, an English teacher at Lynwood who had an epiphany one night at home.

The intellectual awakening struck, as they often do, when Sitomer was sleep deprived, up at 2 a.m. trying to finish a lesson plan on English poet Dylan Thomas. Sitomer was restless, realizing he had to wake up at 5 a.m. to get to class. "I was focusing on Thomas's line 'Do not go gentle into that good night,'" he says.

Then it hit: Sitomer began thinking about Tupac Shakur, a deceased rapper his students idolized and whose music they often played. He went online and dove into Shakur's lyrics, and, although the rapper artist had lived a violent life and died tragically in a hail of bullets on a Las Vegas street, Sitomer saw that his writings aren't all about misogyny, homophobia, or gang violence.

Instead, Shakur also wrote about treating others with respect and standing up to aggression. Deep within the hard-edged raps were positive messages about elevating your consciousness and rising against adversity.

"So, I built a bridge from Tupac to Thomas," Sitomer says. Staying up most of the rest of the night, he compared the poet and the rapper, finding relationships in the meaning of their words and the rhythm of their rhymes of the English poet and the late rapper. He pulled out similar alliterations, metaphors, and thematic elements. Exhausted, Sitomer finally went to bed.

The next day, Sitomer was running a little slow, but his students weren't: The kids made the connection immediately." My class was electric," he says. "The following day, the first thing they wanted was more poetry and hip-hop," says Sitomer, who was recognized with California Literacy's Teacher of the Year award in 2003 for the remarkable turnaround he stewarded in the inner-city school.

"I pray that he keeps on doing what he's doing," says Ali. "He made an impact on my life."

Is Your Game Tight?

It's a message other educators around the country are starting to hear. In classrooms from Los Angeles to Philadelphia and everywhere in between, teachers realize that the popularity of hip-hop is a powerful tool that can be used to engage students and teach everything from English to algebra to the periodic table of the elements in chemistry class. 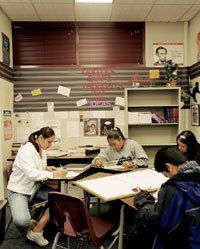 "Hip-hop is a very powerful educational tool; it's very exciting," says Toni Blackman, the U.S. Department of State's hip-hop cultural envoy (yes, that's a real title) since 2001. "Teaching has to change. When teachers have to compete with technology and media for students' attention, you have to get your game tight if you want to succeed."

The birth of hip-hop in New York City in the early 1970s is generally credited to a DJ named Kool Herc, who recited and chanted improvised rhymes over reggae records. The music, which quickly grew more polished, features a rapper delivering syncopated spoken lyrics over a heavy beat, and was one of the first musical forms to strip away live instrumentation and emphasize lyrics and rhythms.

Hip-hop, filled with slang and street-smart stories, quickly became a driving force in New York City's youth culture. In the 1980s, thanks to pioneering music from groups such as the Sugarhill Gang and Run-DMC, rap and hip-hop quickly received nationwide attention. Today, led by such artists as Eminem, 50 Cent, Ludacris, and Nelly, hip-hop is the one of the biggest-selling categories of music. It is to America's global cultural heritage what jazz was 80 years ago.

Dawn-Elissa Fischer has seen the power of hip-hop in a classroom. Fischer teaches at Laney College, in Oakland, California, a post she took after spending time at Harvard University as an education-outreach coordinator at that school's Hiphop Archive. (The archive, which she now consults for, has since relocated to Stanford University.)

One of Fischer's first jobs in education was at Washington Middle School, in Springfield, Illinois. When Fischer arrived at the school, more than 70 percent of the students in her English class were failing."I'm a member of the hip-hop generation," she says. "I used hip-hop to facilitate my own critical-thinking process, so I wanted to use it in the classroom."

Fischer brought local hip-hop artists into the classroom, and played radio-friendly edits of popular songs to study parts of speech and other grammatical lessons. The results were astounding: At the end of her program, only two of the 150 students failed. The turnaround "was surprising even to me," she says.

One person who isn't surprised is Keith Morikawa, an aspiring filmmaker who recently completed his first documentary, Reading Between the Rhymes, which looks at teachers using hip-hop to educate. Morikawa traveled from coast to coast filming educators, attending conferences, and meeting with hip-hop artists for his film.

Morikawa recalls a trip to a high school freshman classroom. "The teacher warned me that the kids could be rowdy around cameras," he says. "We had three cameras set up, and not one student flinched. They were all fixated on what he was talking about, which was Tupac and race. As far as getting their attention and doing what the teacher wants, I don't think I've ever seen anything better."

Fight for the Right

This year may be the one in which the concept of using hip-hop in the classroom reaches critical mass. Many of its practitioners certainly think so, but proponents still face a tough slog in convincing school administrators that the music they hear derided by politicians and parents can be used to educate children.

Part of the blame for this opposition lies with popular culture, which has co-opted hip-hop and transformed it from a rebellious, largely positive form of youth expression in the late 1970s and early 1980s to the overly commercialized, multibillion-dollar juggernaut it is today. Our fickle society is in a phase in which the most popular hip-hop today is often the most misogynist, sexist, and violent, and panders to the basest human emotions. This bottom-scraping attitude doesn't help the educators who are trying to approach parents and administrators for permission to use hip-hop in the classroom.

"There are many misperceptions of hip-hop from academia and the community," says Sitomer. "They're quick to dismiss it; they don't see the rappers as talented artists. I had to fight the students to embrace classic poetry, and had to fight the school administration to embrace contemporary poetry. It was uphill on both fronts."

Morikawa agrees."It's hard for administrators to justify using hip-hop in the classroom with all the images you see out there," he says. "You're always going to have some people who are against it. But you have to help the students critically consume what they're seeing anyway."

But even the most controversial artists today offer educational opportunities -- when edited carefully. Daniel Zarazua, a teacher in Oakland, California, uses a unique approach to teaching with hip-hop. He takes those elements that are most maligned -- the over-the-top commercialism, sexism, and violence -- and strips away the bravado to show that the rap emperor has no clothes.

"I have the students write down ten goals they want to accomplish in their life," he says. "Then we look at hip-hop magazines and music videos to see if their favorite hip-hop artists match up to their goals. If not, why not? If your goal is to go to college and take care of your family, but this artist is telling you to buy a $3,000 watch and do alcohol, that doesn't match up."

Jeff Feinman, who runs the DJ Project, an after-school program in San Francisco for students struggling in school, uses hip-hop to connect with the students, and, like Zarazua, he also forces them to critically examine the reality behind artists' braggadocio. "We look at what it means to be a pimp," he says. "We look at who is hurt by that."

Most teachers who incorporate hip-hop into the classroom are careful to edit out sexist and violent language. "I changed 'tattooed on your ass' to 'got a hall pass' once," says Fischer with a laugh. Once the lyrics are cleaned up, and songs "bleeped," the students can learn everything from math to grammar, using hip-hop as the way in. 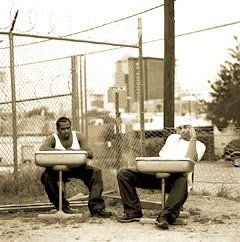 A musical group in Tucson called the Funkamentalz even uses homemade hip-hop songs to teach the periodic table of the elements on their album Education by Any Means Necessary, which features lyrics such as "Your calcium level's cadmium cool like carbon-copy californium girls in a pool."

As educators continually strive to light a spark in their students, hip-hop fans see the music as a way for teachers to infuse their students with a desire to learn. "Kids don't connect at school, for a number of reasons," says Feinman. "How can we use culture that speaks to the youth to get them excited to learn? We use hip-hop. It was the magnet."

"I teach in an inner-city high school," notes Sitomer. "My community is plagued by gangs, drugs, and guns. The kids who make good choices are those who read and write. Most of the kids do not."

Sitomer, speaking on a phone in his classroom between school periods, breaks away for a moment to answer a student's question. Returning to the phone, he laughs briefly at a thought, then reveals it: "You don't have to be an aficionado of Biggie Smalls to use him to reach Langston Hughes."

The Internet is filled with information for teachers considering using hip-hop in their classrooms. Here are some good sites for getting started:

A tremendous resource for using hip-hop in education. Lesson plans, articles, unit materials, and other information make this a great first stop for educators.

Hip-Hop Poetry and the Classics for the Classroom

Alan Sitomer cowrote an instructional guide for how to incorporate hip-hop into the classroom. At this site, teachers can see some sample lessons and order the book for more information.

Flipping the Script: Critical Thinking in a Hip-Hop World

A curriculum for teaching students media literacy and other topics using hip-hop music and culture.