Editor's Note: This series is archival and was discontinued at the end of 2010. For more recent picks from Edutopia's digital curator VideoAmy, check out her regular blog, "Five-Minute Film Festival".

In the flurry of end-of-the-year retrospectives that happen in December, I found this video particularly intriguing and surprisingly moving. This is Google's take on the top events and moments from 2010 from the perspective of most-searched terms. You can visit Google Zeitgeist for more information and to find out how the world searched in 2010. (Source: Google's YouTube Channel)

In a revival of the English-Only Movement, 31 states have passed laws that make English their "official language" -- and discouraging bilingualism. Yet the world is getting increasingly smaller, as kids have more access to other cultures via technology, and the demand for bilingual workers is growing by leaps and bounds. This trailer for a new documentary, Speaking in Tongues, which explores foreign language learning through the stories of four San Francisco families who decided to enroll their children in public school language immersion programs. (Source: Patchwork Films)

Many people were surprised when Time Magazine announced 26-year-old Mark Zuckerberg, founder of Facebook, as the Person of the Year for 2010. There's no doubt he's been in the news quite a bit, between the film The Social Network and his enormous $100 million gift to Newark Public Schools. Do you think Zuckerberg is deserving? Who is the person of the year in education? Check out this Edutopia discussion to comment and vote for your favorite. (Source: ITN News' YouTube Channel)

With almost unnerving precociousness, 11-year-old Birke Baehr explains the problems with our industrialized and corporate food production systems, and makes the case that we should all eat organic and local. If you weren't already convinced that sustainable is the way to go with your food, have a listen to Birke - he's quite passionate! (Source: TED Talks)

Student Work: At The Science Fair

Speaking of talented kids, this video was created by high school senior Kevin Temmer, who not only wrote and performed the song, but did all the animation as well. Kevin attends an International Baccalaureate high school, and this video was made as a community service project, intended to introduce middle-school children to the science fair. Looks like Kevin is heading for a career in animation! (Source: The Science Siblings' YouTube Channel)

In this video, Jasmine performs her moving poem "Sickle Cell" at the Fort Lauderdale Regional Finals. In case you've never experienced the national poetry slam series Brave New Voices, you can still see these amazing young poets perform their work, and get some peeks behind the scenes, at HBO's Brave New Voices website, or on their YouTube playlist. Caution, there are strong themes and language in many of these. (Source: HBO's Brave New Voices)

We've just launched a new package on separating fact from fiction in the world of brain-based learning and neuroscience -- and not a moment too soon. Even as I hunted for these videos, I had a hard time deciding what was worth a look. Check them out and get your brain going.

The New Science of Learning: Brain Fitness for Kids

Here's a trailer for a new documentary that explores recent breakthroughs in neuroscience and educational research that have led to a new understanding of the learning capabilities of the brain. It has aired on public television, but the website still leads to a series of products: BrainSpark and Fast ForWord. What do you think -- fact or fiction? (Source: Santa Fe Productions' YouTube Channel)

This excerpt from the much-loved PBS science program NOVA explores what scientists know about how the brain works now, as compared to what was known 150 years ago in Darwin's time. More resources at the What Darwin Never Knew website. (Source: PBS Video)

Early Learning and the Brain

There's no denying that those early years are critical for brain development. This video from The University of Washington Institute for Learning and Brain Sciences looks at how scientists now can study the brain actvity of children as young as ages 0-3 years old. (Source: Shane98125's YouTube Channel)

'Tis the season to reflect upon what we're thankful for, and I, for one, am incredibly thankful for all the dedicated educators that make a difference in the lives of kids every day! Check out Edutopia's Give Thanks discussion from last week for some wonderful sentiments. This video was produced by Take Part, an online community that encourages and facilitates social activism. (Source: takepart's YouTube Channel)

We Shall Remain: After the Mayflower, Pt. 1 of 5

For many, the day after Thanksgiving, Black Friday in the retail industry, is the biggest shopping day of the year. But did you know that since 1992, it's also celebrated by thousands around the world as Buy Nothing Day, a day of activism against rampant consumerism? Which way will you go? (Source: myhdtm's Channel) 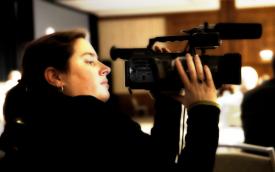 If you know of a must-see video, leave a comment here, email the URL to media@edutopia.org, or tweet a link to @VideoAmy on Twitter.com and I'll be sure to take a look. Note: Some videos may be preceded by brief ads; in some cases, free registration may be required; and news-sensitive links may expire over the next week.