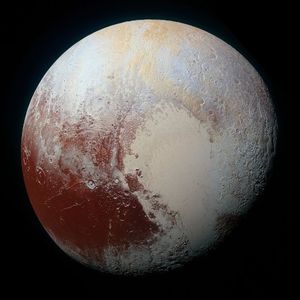 Photo Credit: NASA/JHUAPL/SwRI
As a middle school principal, I stand between the urgent, present moment of whatever need has come banging through my office door and the elusive but necessary long view, remembering that whatever has been given me to fix or tend today can be best understood as a part of a much longer journey. I need stories to remind me of that balance. So on the first day of school this year, I told our 259 students about a recent mad journey to the edge of our galaxy with the hope that when they land in my office, we could put whatever happened that day in celestial perspective.

Once upon a time, long long ago, in 2006, I told them, before you middle schoolers started first grade, NASA launched a spacecraft called New Horizons to travel to the edge of our solar system and see Pluto. At that point Pluto was still a planet, and this probe would travel faster than any interplanetary probe before it. If an Apollo mission took three days to get to the moon, New Horizons would take nine hours to do the same trip. And it had to be fast because it had to travel an incredibly long way. The distance between our school in the Bay Area and a school in New York City is about 3,000 miles. The sun? Ninety six million miles from us. To get a sense for the vastness of that space, imagine this. If the sun were the size of a basketball, the earth would be a pebble orbiting the star at about 100 feet, Mars, a grain of sand another 60 feet farther. Pluto? At this scale, the dwarf planet would be nearly a mile, 4200 feet from the basketball sun, because Pluto and his five moons are actually three billion miles away from our sun. Three billion miles.

Quietly for nearly a decade, a spacecraft has been following a three billion mile trajectory towards the edge of what most people can imagine to see a class of planets astronomers have only ideas about. While my students were taking piano lessons, the New Horizons spacecraft, itself the size of a baby grand, quietly hurtled through space. They were driven to school at 30 mph; it traveled past space junk at 36 thousand mph. Until, finally, this July, after nine and a half years, New Horizons finally got close to Pluto, so close that at this distance from earth it would clearly see the lakes in Central Park. On July 14, New Horizons did what it has been waiting for; it flew by Pluto and took pictures like a crazy Taylor Swift fan with one giant selfie stick.

It took four and half hours, a kind of eternity, for the signals with the first images of Pluto, traveling at the speed of light, to reach Earth. Every image of the dwarf planet’s surface before the voyage had been merely hypothetical, an artist rendering. Think of the excitement of all those people packed in a room trying to get a good view of the screens after waiting for a decade. Puts a slow Internet connection to shame. And what did they see as the blurry, round, reddish-brown dwarf came in to focus? A thousand-mile-long whale that looks like it is swimming along the planet’s equator. And a giant heart with an icy mountain range in the center the size of the Rockies. A poetic flourish, Pluto. Well done.

I wanted my students to hold the sense of scale of this exploration, both time and space. I wanted them to think of the lessons this spacecraft could teach. I found four to share with them.

One: Patience and Determination

It goes without saying that you need to take the long view if you want to travel three billion miles. If you want to learn Chemistry, read Shakespeare, or change how you feel about yourself as a math student, the distance may not be as great but the patience required may feel similarly epic. I hope they find things that they can be as patient and determined about pursuing. And I hope that we, as the adults who guide them, can remain steady and take this long view remembering it can take 10 years to cross vast distances.

More than two thousand men and women of many nationalities at three different locations in the US built this probe. No one did it alone. When kids get wrapped up in an intrapersonal challenge this year, I hope they will remember that learning teamwork in school is as important as learning the content. Like these astronomers, our kids’ ideas will travel great distances if they work as a team towards a common goal.

Traveling to Pluto also reminds us that kids can always be involved in discovery. In Pluto’s case, an 11-year-old girl named Venetia Burney won the contest with her suggestion that it be named after the Roman god of the underworld since it was at the edge of our known system and shrouded in mystery. Venetia grew up to be a teacher by the way, and New Horizons carries an eponymous dust counter in her honor. It’s the first scientific instrument designed by students to be carried on an interplanetary spacecraft. I hope Venetia reminds me of the power my students have to inspire and affect the world of discovery.

Fourth and finally, the story of reaching the far away Kuiper belt, Pluto, and its moons, reminds us of the beauty of our mistakes. Percival Lowell, the man who first predicted that there must be another planet out there based this belief on faulty observation. But his curiosity and perseverance to look for planet X allowed people to eventually find Pluto. A self-taught farmer named Clyde Tombaugh was the man to finally locate Pluto. Look up his story as it teaches all sorts of lessons. Evidently his corn was always planted in perfect rows and he taught himself to build a telescope. I hope that as adults we can help students see that learning is not always a linear process and that their mistakes and the mistakes of others can be gifts of discovery when we apply a bit of curiosity to them.

From New Horizons, I derive these lessons of patience and determination being the impetus that helps you cross from here to there even if that distance is 3 billion miles, that nothing grand can be done alone, that kids matter, and mistakes are beautiful when accepted with curiosity.

The week after the New Horizon’s pictures were beamed to earth, I drove down to Big Sur, one of my favorite places on this planet. There, I thought of the paradox of horizons; no matter where you are, you can always look out and see a horizon. Even if you were to travel to the exact spot of the horizon you had been looking at, it would no longer be the horizon, there would be a new one out to tease you. It’s all a matter of perspective and there’s always more to explore.

Here’s to the new horizons our children will reach for this year. What an honor to travel towards the vast unknown with them, together.