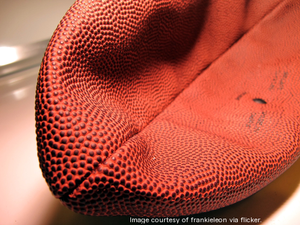 Making science fun is one of the biggest challenges for those who teach STEM, but sometimes the news provides a gift. And, the most recent offering is the headline called Deflate-Gate.  In case you’ve been in a deep slumber for the past few days, there is evidence that the footballs in a key game were underinflated, which would be helpful for players since a softer ball is easier to grip and catch. And, the public is captivated and wants to know if this under-inflation was intentional or not.

Well, we can apply this to Deflate Gate and look at the pressure of the football at two different instances: when the ball was inflated and when the ball was used in the game. And, the expression below would do the trick:

(Remember:  Convert to metric when doing the math and them back and then back to units we know.)

Here is a YouTube video that spells this out: http://youtu.be/5bvYVFs3DQM

Have students make a calculation; have them speculate of how to account for the lost pressure. Engage them.

Even better. Get a football and a pressure gauge and test the football’s pressure at room temperature and then again after being in the freezer.  See if there is a difference. Test a hypothesis.  You will be a STEM rock star if you do.

Making science fun is challenging, but when we get a gift from the news we should use it and the NFL has provided a huge one.  Your students will never think that the Ideal Gas Law is boring again.

(Disclaimers: When it comes to the NFL debacle, we don’t know anything about the history of the ball, so this blog is just for educational purposes. This exercise is not intended to find a team at fault. And, while I wrote a book on football, called Newton’s Football, I do not benefit from the NFL’s outcome nor have any direct interests. My goal is to make science come alive! Ramirez Out.)