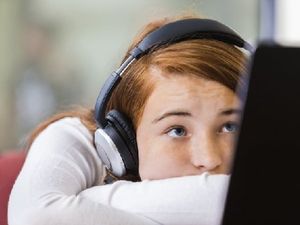 Every teacher has that student. The student who spends the whole period with their head down. The student who never turns anything in. The student who tries to talk or text the whole time. You can be an expert in classroom management, but still struggle with engaging all of your students. When I worry about engaging everyone, my husband always tells me, “honey, you can’t reach every student.” I always reply, “I know. But I have to try.”

I’m often reminded of the modern day parable of the little boy who walks down the beach throwing starfish back into the ocean. Without this help, the starfish would die. Another man stops and asks the young boy why he is wasting his time. There are so many starfish in the world, that this boy’s actions wouldn’t amount to anything. He couldn’t possibly make a difference. The sage little boy promptly picks up another starfish, throws it into the ocean, and demurely replies, “it made a difference to that one!”

Even if I can’t reach every one of my students, I can always try. And when I do touch someone, it will have made a difference to them. So, how do you try? What are some strategies that you, as a teacher, can use to attempt to engage your reluctant students? I have composed a list of 5 strategies that have worked for me, in my experiences with teaching. Hopefully, they can work for you too!

In one of my classes, I had a group of friends who are not interested in learning English. They would have preferred to escape to the skate park for the duration of the class period; instead, they got to sit through Mrs. Sorensen’s amazing English class! Although they weren’t the best students at first, I treated them the same as everyone else. I was interested in learning about them, in finding out what they loved to do. It wasn’t hard for me to discover that they loved skateboarding. So then, I started to ask them about it. When it was time for group work, I would check to see how they were coming along, and then I would inquire about their skateboarding, and how they liked the X-Games, etc.

At the start of every lesson, I have a “hook” to get the students engaged. It could be a story, a Youtube video, or a game, among other things. One day, I decided to have my hook be a skateboarding video, that I tied to a downward slope and momentum once you start down a certain path. It’s hard to stop without crashing or burning. But, there is always an upward slope. You can always change your path. I tied this into the book that we were currently starting. The students started to see me as a teacher who not only was interested in their learning, but in them as a person. Because they knew that I genuinely cared about them, they were more willing to participate in class than before.

2. Move Them to the Heart of the Class

The heart of the class is usually at the center. The students who are the most engaged, and friendly towards one another tend to drift to the center of the room. If you have the center of the room engaged, the energy seems to flow outwards to the edge of your classes. You know the students who sit in the back corner, or who sit in the desks up against the walls or the windows. The stereotype is that they are just there to hopefully scrape by with a pass, while sleeping with their head against the wall. But that’s not always the case. Maybe they’re sitting back there because they don’t have any friends in the class, or because they are really shy and don’t want to be called in. They like to avert their eyes when you ask a question.

One of my students, was a very pretty, and seemingly outgoing girl. She would come to class every day, turn in her work, and then listen to her music (I let my students use electronics when they have free time, or are completely done with their work for the day). She would sit next to a group of kids that she was definitely not friends with. So one day, for some group work, I decided to make a seating chart to put her in with some other girls in the class. Slowly, she started to sit nearer, and nearer to them, and then she started talking to them. Once she started talking to them, she felt more comfortable speaking in class. We got her put into the heart and soul of the class, and pretty soon, she began to exude that same heart and spirit.

3. Ask Them to Help You With Something (Anything!)

A lot of the time, a reluctant student will just do the bare minimum. They go to class, listen, quietly do the work (or maybe not so quietly!), and then slip out without a word (after the bell rings, of course). Whether they are shy, not interested in the class, or a “Chatty Cathy” who doesn’t seem to understand the word “respect”, they just don’t seem to care. You can’t engage them in class discussions, and you don’t know what to do anymore. So, why don’t you try and incorporate them into the lesson for the day?

When I was reading The Crucible with my class, I decided to play a game for my “hook” one day. I had a couple of my reluctant students come with me into the hall, and I said “hey, could you guys please help me with part of the lesson today? It will be really fun.” I could tell that they immediately perked up at the idea of being singled out to help. It made them feel important. It made them feel trusted, and it let them have fun. After all, how much magic was felt in my reluctant students through a tricky game of “Black Magic”?

4. Pull Them Aside and Offer to Give a Second Chance

My students have it pretty easy in my classes. If they show up, and are on task the entire time, they don’t often have any homework. But, the key words here are “on task”. If they aren’t paying attention during our class discussion, they are going to miss important information. My tests and quizzes make up 30% of the grade, so they are important! If someone performs poorly on a test, and they are already a reluctant learner, they are going to want to give up! Sometimes all they need is a little encouragement.

I was giving a quiz on Act 1 of Hamlet, and it was worth 50 points. The questions were relatively simple, so I assumed that my students would all do really well. I had one young man who received a 26%, which brought his grade down from a “B” to an “F”. I pulled him aside after class, knowing that he was a reluctant student, and offered to let him retake the test. I said “John (name has been changed), I know that you are a good student. I get that feeling from you. You didn’t get the best score on your quiz, so if you would like, you can review over the weekend, and then come in and retake it. I know that you’ll ace it this next time.” John immediately brightened up and promised to study over the weekend. Since then, he has been more engaged in class, and gotten much better scores on all of his classwork.

5. Send a Positive Note to Their Parents

This last strategy is one that I feel very strongly about. When you are a parent, and you get an email or a phone call from a teacher, you know that it is going to be bad news. You wonder what your child did now to result in a teacher contact. So imagine your surprise when you get a positive contact. At least once a week, I try to send a positive email home to different parents about their students. Maybe a student who is a frequent problem does really well in class that day, so you decide to send a quick note telling their parents how great they were in class, and how much you enjoy having that student in your class. Guess what happens? The note gets put up on the fridge, and the student now has something to be proud of. I guarantee that those students will want to try harder. You will see a difference.

My personal anecdote for this strategy is one that I hold near and dear to my heart. One day, I noticed that a student had gone above and beyond in his summary of an article we had just read. Not only had they been very thorough, but he had even gone as far as MLA citing the article at the end of the summary. I decided to write a note home to his parents about his impressive work, and positive addition to my class. The next day, I got a note from his mother thanking me for that note. She said “it’s so nice to see that a teacher would take the time to send something like this. Alex (name has been changed) has been struggling in school because he is a new student, and this brightened our day to hear a positive remark. He has been trying so hard. Thank you so much!” Alex was a quiet student who was reluctant, but not in a bad way. He just didn’t know how to fit into the class, and how to engage.

All in all, there are a million strategies that a teacher could use to try and engage a reluctant student in their classroom. These are ones that have worked quite well for me, and I hope they can work for you as well. Even though, as educators, we try to reach every student, the reality is that we most likely won’t. Yet, we keep trying, because just like the little boy with the starfish, even if we just reach one student, it will have made a difference to them.