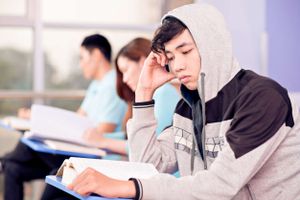 Most people who enter the ranks of educators have been academic bound their entire life. Like me, many love to read. Visiting a library or a book store was more enticing than an ice cream parlor. I slept with a flashlight so I could extend reading deep into the night and I secretly wrote poetry and the family newspaper on my father’s old Remington typewriter. I also remember the first student who shrugged his shoulders and said, “So” when I informed him he could fail my class if he didn’t complete his project. It was unfathomable to me that a student could be so apathetic, but unmotivated students are more common than novice teachers realize. Here are three methods that I used over my forty year career with some success to motivate the unmotivated.

#1 Focus on the Rewards

“The moment you doubt whether you can fly, you cease for ever to be able to do it.”
― J.M. Barrie, Peter Panhttp

Many students have never experienced success and as a result they have no reason to believe that success is possible. Instead of working toward being successful, they often entertain themselves with driving the teacher crazy by harassing other students. When I was teaching in an alternative education school in California, I had many students like this.

From a workshop, I learned a method of discussing outcomes and rewarding students with frequent positive post cards when they had a small victory. Instead of focusing on the grade, have them discuss what their parents will feel if they brought home a successful report card or how would they feel if they could make their parents proud. Positive feeling is a strong motivator.

First, students must believe they are capable of succeeding.  Many students never realized that this was possible, but if the teacher takes baby steps, the teacher can sell "the idea of success" to them. Like Peter Pan, a teacher has to help students believe that success is possible and then give them the skills to succeed. The younger they experience success, the more likely it will continue.

#2 Confer With Each Child Individually

“Never believe that a few caring people can't change the world. For, indeed, that's all who ever have.” ― Margaret Mead

Students perform for other people that they care about. They care about people who care about them. As a result, if a teacher takes time to discover what difficulties a child might be facing and what needs the child has, that child is much more likely to perform.

For example, a young man, Randy, was sent by his parents to a parochial school to improve his academic performance, but Randy didn’t want to be separated from his friends, so he created havoc at the school hoping to be returned to his friends at his former school. If his teacher had taken the time to talk to him and help him make the transition into a new peer group, the school and Randy could have had a successful experience.

Even if the teacher stands in the hall between class changes and interacts with students, a great deal of information can be gained. Simply speaking to each student cordially when passing in the hall can increase the likelihood that they will be more successful in the classroom. Students need to learn to set small goals and large goals to be successful in school and life. Having frequent individual conferences with student enables the teacher to direct the student in creating and adjusting goals while reassuring the student that an adult cares about his/her success. Remember some students have parents who do not have the time or the knowledge to have these types of interactions with their child.

Students with learning disabilities or are on the autistic spectrum are more successful when they know what to expect each day in a classroom. As a result it is a good idea to establish a set of procedures.

When students are confronted with changing classroom procedures, they often become apprehensive and even aggressive. If they know that each day, they will need a book, a notebook and a pen or pencil, they are more likely to bring them. If they know that each class begins with certain activity: silent reading, an interactive debate, or a problem to solve, they waste less time getting down to the business of education.

These procedures can be set to music, timed and my even involve movement. I know of one teacher who had “line leaders” pass out materials while dancing to rock music. I know another teacher who passed out treasure maps to students as they entered the room. Her students had to find the answers to a quiz by searching the room for clues. I know another who gave a daily quiz on the work from the previous day. Repetition of the same pattern is the key to success.

There are many methods that can be used to reconnect students to their education. Don’t give up on them. The best method is to discuss with other teachers a tactic that they might be using that might work on that particular students. Each child is an individual, so there is no one method that works on all of them.

For example I had one student who wanted to drop out of high school and get a job. I brought the classified ads to class and sat while he looked at prices of apartments, cars and I made him aware of the price of food, utilities, gas and insurance. When he added it all together, he decided to complete his education and try to find a job that paid more than minimum wage. Years later, I encountered the young man who was married with children living in a nice home in the suburbs. He thanked me because that small exercise had helped him understand the importance of completing a trade school education and learning a trade that he enjoyed.

Motivating the unmotivated: it can happen.