Each fall, we hope for a successful year. We say this like a benediction. When a sixth-grader has a lightblub moment and “gets it” or the seventh-grader finally makes a different choice, the kind we’ve been coaching, we recognize a zing of success. But beyond these lightning bolts, what’s the process that creates enduring success? And how do we define it? Here are three lessons I lean on to understand success.

Dr. Angela Duckworth, UPenn Professor of Psychology and recent MacArthur Genius Grant recipient, conducts research on a four letter, potentially universal predictor of success. Early in Duckworth’s career she was a seventh grade math teacher and, as we all know, seventh grade math is fertile ground for grand theories about future success. Duckworth was confounded by the fact that she wasn’t necessarily seeing a correlation between intelligence and achievement. So she embarked on research to understand what motivates success; she set out to see which cadets stayed at West Point and which rookie teachers lasted the year in low-resourced schools to determine the common denominator. In each place she asked a simple question: “who is successful here and why” and looked for the pattern.

Her working hypothesis: grit is the best indicator of success. She defines grit “as the disposition to pursue long term goals with passion and perseverance…it is sticking with things.” That was actually one of the first lessons I shared with kids on the first day of school when I talked about the patience and grit required of the NASA scientists who spent 9 years to pilot the New Horizons space probe 3 billion miles before it could achieve success and take the first pictures ever of the dwarf planet Pluto.

Lesson Two: What We Believe About Success Becomes Our Reality

The next logical question everyone asks Dr. Duckworth is “if grit predicts success, how do we breed grit in kids?” When asked this in the TED Radio Hour interview with Guy Raz, Duckworth laughs and says she doesn’t know but she thinks one part of it may reside in the work Dr. Carol Dweck is doing on “Growth Mindset” at Stanford. If you don't know Dr. Dweck’s work on mindset, check out her wise council. Her website shows the link between a student’s mindset and outcomes: “In a fixed mindset, people believe their basic qualities, like their intelligence or talent, are simply fixed traits….They also believe that talent alone creates success—without effort. They’re wrong. In a growth mindset, people believe that their most basic abilities can be developed through dedication and hard work—brains and talent are just the starting point. This view creates a love of learning and a resilience that is essential.” Jo Boaler, another Stanford Ed Professor, writes about the evidence for growth mindset in the math classroom. On her website, she has great resources for teachers and compelling research: “In one study, seventh-grade students were given a survey to measure their mindset. Then researchers followed the students over two years to monitor their mathematics achievement. The results were dramatic, as the achievement of the students with a fixed mindset stayed constant, but the achievement of those with a growth mindset went onward and upward (Blackwell et al., 2007).” 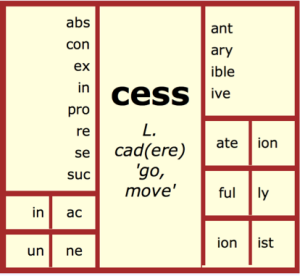 Duckworth, Dweck, and Boaler help us understand the psychological source of success but I also wanted to know what the word “success” really meant in English. Could the definition give us a clue about how to achieve it? Pete Bowers, a guru of Structured Word Inquiry, teaches students to uncover the spelling-meaning connections between related words. (Explore for more on SWI here.) Pete told me “success” could be analyzed into two parts, the prefix <suc-> and the base <cess>. He showed me that <success>, <access>, and <process> all shared the same <cess> base. I was hooked by this connection; often if we give kids the right kind of “access” to materials and challenge, the “process” itself will create, and often can be defined as, a “success.”

All of these words have the root <cess> in common. Could the word <success> be related to <recess>, a connection kids would love? According to etymonline.com, the root of these words is ‘ced(ere)’ which gives us the base <cess> and means “go, move.” As in, “go and see what happens” and that dictum that “90% of success is showing up.” I know the athletics department would love knowing that moving is the base of success.

The structured word investigation gives us a broad word family and we could play with these connections and define success for our students as a process of incessantly moving forward in our understanding such that we keep accessing new, necessary questions that are no longer inaccessible.

Both the academicians and etymologists come to a similar conclusion. To find success we need to develop grit. And the way to grit is a growth mindset. And a growth mindset means we believe learning is not a fixed state, but rather, true to the definition of the word success, we are always moving, going and growing.