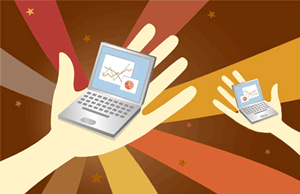 The term digital divide was coined in the mid-1990s as a way to describe the gap in equity between those who have access to computers and the Internet and those who do not. Today, the conversation has shifted to this question: How do we define access when the price of personal computers and related technologies has dropped dramatically over the years and, according to the Pew Internet & American Life Project, 95 percent of Americans between the ages of 18 and 29 use the Internet? And all of this is happening while we are in the midst of an explosive rise in mobile technology.

"Wireless is being sold as the bridge across the digital divide," says Amalia Deloney, grassroots policy director at the Center for Media Justice. "But what we know is that wireless is not a substitute for a wired connection." It's very difficult to apply for a job or college, for instance, on a mobile phone. According to Pew research, in 2010, just 45 percent of households that earned less than $30,000 a year had broadband in their homes. It would be unfair to say that a community has Internet access because a cash-strapped local library has a DSL connection. As the authors of a recent Federal Communications Commission-sponsored study said, "Access to the Internet is not a choice: It is a necessity."

How the Landscape Has Changed

Things look a bit different now than they did in 1995, and today's divide is more nuanced than it was in the mid-90s. Technology is more widespread and prevalent and there have been massive jumps in technological innovation, all of which has created higher expectations for technology at home, at school, and at the workplace.

Mobiles: The rise of mobile technology in the past few years is mind-blowing. According to CTIA - The Wireless Association, some 91 percent of Americans now use a cell phone, and 90 percent of cell phone subscribers in the United States and Western Europe have phones that are Internet-ready, according to comScore's 2010 Mobile Year in Review. Whether cell owners are using the Internet-access feature or not, it's there, and if the trends say anything, they'll be adopting its use by leaps and bounds.

These days, mobile devices are sophisticated. "Kids are bringing more technology to school in their pockets than we have been able to buy them over the last thirty years," says Shelly Blake-Plock, blogger in chief at TeachPaperless and a faculty associate at the Johns Hopkins University School of Education. This fact has prompted some to say that the digital divide is shrinking: African Americans and English-speaking Latinos are among the most active users of the mobile Web, and cell phone ownership is higher among these groups than it is for whites, according to several recent studies. But for many of these cell phone users, mobile technology is the only way they can get online. Access to richer graphics and data, as well as superior tools, is still limited on many affordable mobiles. At the same time, many schools continue to demonize cell phone use during school, which may be an outdated policy. Not only are there an increasing number of educational applications for mobiles but, as Blake-Plock suggests, prohibiting phones now means "disconnecting the kid from what's actually happening in most of our lives."

Broadband: In 2009, the FCC began developing the National Broadband Plan, a work-in-progress that aims to increase broadband access across the country by providing additional infrastructure, incentives for companies to create low-cost access, educational programs, and much more. The plan includes thousands of suggestions from the American public made via online comments and Twitter posts. In some cases, corporations are doing great work by pushing for greater broadband access and creating public-private partnerships that benefit those on the underserved side of the divide. But the power of the provider in this case can also be problematic. What creates more customers may differ from what creates more digitally literate members of a Web 2.0 community.

Digital Inclusion: In some circles, the term digital divide is itself defunct. Instead, using digital inclusion is not only a way to reframe the discourse in a more positive light but also reflective of what access, adoption, and literacy in the digital world really mean today. Students who are excluded from the digital universe know exactly what they're missing, according to Deloney. "They know they're not getting the homework help that everyone else is; they know they're not getting that discount textbook or taking classes to further their degrees." Now, even the United Nations is stepping up to the plate. In May 2011, U.N. Special Rapporteur Frank La Rue released a report declaring that access to the Internet is a basic human right. He based this on a year of meetings with human rights organizations across the globe.

Perhaps the authors of the "NMC Horizon Report: 2011 K-12 Edition" -- part of a series of research-based analyses of trends in ed tech by the New Media Consortium -- said it best: "The digital divide, once seen as a factor of wealth, is now seen as a factor of education: Those who have the opportunity to learn technology skills are in a better position to obtain and make use of technology than those who do not."

How to Level the Digital Playing Field

Today, physical access to computers and the Internet is only the first of three significant layers to digital equality, according to both Deloney and Blake-Plock. Here's how they break it down (and how we can change the game):

Availability of the Devices Themselves: Is there broadband installed at home or at a library close by? If there's a computer in the classroom, does it do more than collect dust? Has it been updated in the last five years? Blake-Plock calls this basic infrastructural inequality the digital divide. National initiatives like the National Broadband Plan, as well as grants for hardware and software in schools and libraries, can help address the essential-tools gap that persists in some rural and low-income areas.

Accessibility of the Technology At Hand: Once there is a Web-enabled computer at a community center or school, can you access the websites you need to in order to learn, contribute, and create? Is there help nearby if a computer breaks down or if a piece of software fizzles? If it's a broadband connection at home, is the monthly cost sustainable for the family? Blake-Plock calls this the access divide. This is a more complex issue to address because it encompasses a variety of obstacles. Among the remedies is to end the practice at many schools of blocking creativity-enabling websites, to make sure there's a computer maintenance staff on hand (or to allow tech-savvy students to do the troubleshooting), and to regulate telecommunications companies so they adopt open-Internet rules when it comes to low-income consumers. (That's a tough one perhaps, but it is what organizations like the Center for Media Justice are working on.)

Literacy: Blake-Plock refers to a final and crucial barrier to digital equality -- the connected divide. This refers to literacy, not only with hardware and software but also with the vast global conversation that the Internet enables. He notes that there is a gap between those who are "getting connected into broader networks, building their capacity and their social capital, creating the new wave of learning" and those who are, for a slew of complex reasons, not doing so. Addressing this means beefing up effective technology-integration programs at schools of education, encouraging and enabling students to create media and to participate in collaborations with others around the world, and making sure that every computer lab -- whether at a school or elsewhere -- has a way for users to tap into an educational component.

Only when there's equal opportunity for everyone to become literate in these technologies so that they're creating and not just consuming content can we begin to imagine closing the digital divide.

Says Blake-Plock, "The question is not whether we can get an iPod into every kid's hand. It's whether communities can leverage the capacity of networks to make learning more authentic and powerful for students." It's not just word processing, but blogging and tweeting; not just a class project, but an international student collaboration; not reinventing the wheel every time, but tapping into a professional-learning community that shares ideas and resources.

There's no question that the road to digital inclusion is lined with obstacles. Efforts from every sector of society will be required to clear a path to a more equitable future. And schools, in particular, have a decision to make. As Blake-Plock says, they can continue to "treat technology as their auxiliary" as they have for years, or they can start to see it for the force it has become today, a place "where culture itself is developing in the 21st century."

For more information on the digital divide, visit our Digital Divide Resource Roundup.

Sara Bernard is a former staff writer and multimedia producer for Edutopia.org.