Drop a laptop computer into the hands of a child in a remote Chinese village, and Nicholas Negroponte predicts a cascade of results will unfold: The child will encounter new knowledge and ways to express herself through images, words, and sounds. She may help her parents find markets for their products in other cities via cheap satellite Internet -- or even develop a business plan herself. One family's growing prosperity will lift the village's fortunes and expand opportunities for their neighbors. 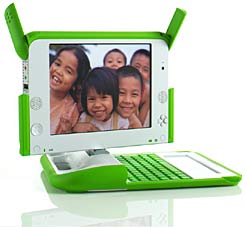 Millions of chains of events like this one are the goal of the One Laptop per Child Foundation (OLPC), the nonprofit organization founded by Negroponte and other faculty of the Massachusetts Institute of Technology's Media Lab. The group has developed a children's laptop, made in bold colors, which it intends to manufacture by the millions and sell at just over $100 to developing countries for their education ministries to distribute like textbooks.

The Linux-based machines will have a hand crank for power in places without reliable electricity, and a display screen with a black-and-white mode that's readable in bright sunlight. Internal wireless devices will enable each laptop to talk with others nearby, creating local-area networks. The XO, as the computer is called, is being tested in Argentina, Brazil, Libya, Nigeria, Palestine, Pakistan, and Thailand. Its makers aim to start full-scale production in mid-2007. 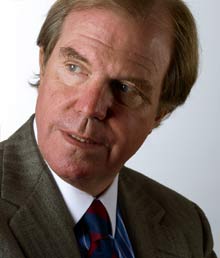 Here, Negroponte, chairman of the OLPC Foundation, discusses the XO's prospects on the eve of its launch.

Has the XO ever been envisioned for U.S. markets? Do you see any potential benefit in the United States now?

This has always been for the developing-world market and conceived for places where less than $200 per child per year is spent on primary and secondary education. The benefit to the United States is perhaps a wake-up call. The nation should just do it. We are not needed. When you spend $8,000-$10,000 per child, whether the laptop costs $150 or $400 is not meaningful.

Whom do you expect to benefit most from the laptops?

Children. We are targeting the full span of age groups, six to sixteen. The most benefit will be for those in remote and rural areas. We have designed the machine to run on human power, for example. Likewise, in places without telephony, we have the means for children to connect to the Internet for less than $1 per month.

How will the laptops change kids' lives?

Think of these as books, pencils, music machines, and toys to make things with. The children will not be just consumers but will be expected to create things. Lives are changed by hope. In the places where One Laptop Per Child has been practiced, parents are more engaged, truancy drops to nearly zero, and teachers say they have never had more fun teaching.

Are there regions of the world where the OLPC model will not work?

There are some cultures where it works more naturally, like Brazil, which is a very bottom-up society. There are others where it is harder, like China, not only because it is a teacher-centric and top-down society, but because Confucius would not have advocated laptops. His theories about teaching, the centricity of teachers, and the required obedience of children are pretty strong.

Critics of one-to-one laptop programs in the United States say the computers facilitate more in-class distraction (instant messaging, MySpace, and so on) than learning, that they allow children access to inappropriate content, and that the benefits of constant access are so far unproven. Do you share those concerns?

We do not share those concerns, but that is not to say they are not real issues. Our kids in Cambodia learn English using chat and MySpace. Children are distracted if the teaching is not interesting. One education minister just said to us, about the $100 laptop, "Finally, education will include learning."

How significant of a setback was India's choice not to buy any XOs? Any lessons learned?

India did not make that decision, actually. The country decided to do it at the state level versus the federal level, and is doing so. The fuss in the press was created artificially by large corporate interests and a small academic irritant in Chenai. The setback was merely the wasted time needed to combat an orchestrated campaign. The lesson we learned is that being a nonprofit, humanitarian organization does not make you immune from dirty tricks.

Does your work end with supplying an affordable laptop, or will you press for concomitant changes in teaching, too?

We are an education project, not a laptop project. When somebody like Intel enters the market with a $330 laptop, as it has done, that is the best news we can hear. Our goal is to maximize the number of children who have laptops -- any laptop. By so doing, we approach a different kind of learning. Teaching is only one way to learn. It should and will be supported by OLPC and others. I would liken us more to Wikipedia, where most previous tools for teaching have been like the Encyclopedia Britannica.

In an ideal world, what is your single greatest hope for this project?

A three-step hope: World peace through the elimination of poverty through education through learning. Education is the goal; learning is the means. A lot of learning can happen without teaching. We're banking on that.