What does it really mean to leave no child behind? The educators of Alaska's Chugach School District believe they have the answer.

There are no grade levels in the rural district, which is based in Anchorage and serves tiny villages scattered throughout 22,000 square miles of remote areas of south central Alaska. Instead, each of its few hundred students tote around report cards as thick as history texts. Each packet details the individual student's progress through the district's more than 1,000 learning standards as they move from kindergarten to high school graduation. 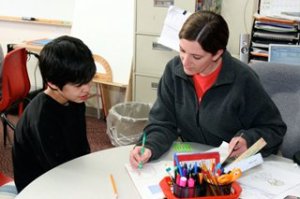 Ask any secondary school student, and he or she can tell you, for example, "I'm at level five in math, level seven in reading, level six in career development." Students mark up the packets to track how far they've come, turning each page into a hodgepodge of multicolored highlights and scribbles. Take a snapshot of all the students' report cards at any point,and each one will look different.

At the core of the Chugach model is this rule: To move to the next level, you must master the one that precedes it. There is no sitting in the back row and skating by. Every child must learn every subject at every level, passing with proficiency equivalent to at least 80 percent -- essentially, a B minus. And when they're done, they're done, whether that means they finish when they're sixteen or twenty-one.

"Time was the constant and learning was the variable -- that's the old model," says Roger Sampson, president of the Education Commission of the States, who led Chugach's transformation as district superintendent in the 1990s. "We switched. What's constant is learning. Time is the variable."

And Sampson says that switch, revolutionary as it may seem, can and should be made in every district, large or small, in Alaska and beyond.

Even as globalization and media propel our culture -- and our classrooms -- toward modes of production that are bigger, faster, and more alike, Chugach has refocused on an approach to education that is smaller, personalized, and variably paced. As Douglas Penn, the districtwide principal, explains, "Our kids graduate when they're ready. We're not pumping them out the door with D's on their diplomas."

This individualized pacing doesn't mean Chugach coddles its students. In fact, it places a great deal of responsibility on them. Teachers expect pupils to direct their own learning -- with guidance, of course -- and complete some of the district standards through projects they create and conduct. The older the kids get, the more leadership they must assume. An example of this ethos is the work of Jordan Geffe, who last spring wrote an essay on the healthiness of city life versus village life. He chose the assignment, topic, and argument (his thesis: Village life is healthier), and compiled evidence to back it up. In explaining the essay, Jordan opened his report card and pointed to exactly what he hoped to achieve: "Write a proficient composition that gives reasons."

At times, the demands can be "pretty upsetting," says Teresa Totemoff, a recent graduate of Tatitlek Community School, who recalls slacking off for a while and then realizing she had much work to do to graduate. "I remember crying, 'I don't want to do it no more!' But it was my own progress. I was proud of all I got done."

The Chugach schools arrived at their approach by way of disaster. In the early 1990s, the district had reached a crisis; its students could barely read, and graduates routinely failed to hold jobs or become productive members of their communities. The district had produced only a few college graduates in two decades. Alienation and mistrust divided the schools' staff from the communities they served. Superintendent Robert Crumley, a teacher at the time, recalls that staff talked about standing on a "burning platform" -- a foundation that could collapse at any moment.

Roger Sampson, a new arrival from Alaska's Kenai Peninsula, embarked on a complete overhaul by enlisting the support and input of both staff and the district's communities. Chugach serves 214 students. More than half are homeschooled, with district support; the others attend school in one of three communities carved out of the evergreens at the bases of mountains rising from Prince William Sound.

Photo Credit: Douglas Penn
Jordan Geffe sets crab traps with teacher Jed Palmer for a science experiment.
In Whittier, a former U.S. Army port, most of the 182 residents live in a high-rise building across the street from the school. Residents typically work at the cannery, at the small boat harbor, or in industries such as railroad, shipping, and tourism.

The villages of Tatitlek and Chenega Bay, with populations of about 100 and 50 respectively, are accessible only by boat or charter plane. People here -- mostly members of the Native Alaskan Alutiiq tribe -- get by largely on government and tribal subsidies and their traditional practices of hunting, fishing, and berry picking. A handful of residents work on the trans-Alaska oil pipeline in nearby Valdez.

Native and mainstream American cultures collide in these two hamlets: A villager might go seal hunting during the day and then watch American Idol via satellite TV that night. Eagles glide over the houses while hip-hop music booms from open windows.