It was the culminating week of Badger Rock Middle School's third quarter technology unit. The questions that my students had struggled with during the unit were difficult:

However, it all came down to one final question:

Which invention was more important, the gramophone or the cylinder lock?

The journey to reaching this final question was the result of our project-based school bravely taking on the theme of technology. To begin, several of our teachers came together to decide on driving questions and learning tasks. For the questions, we decided to focus on: "How has technology impacted U.S. History?" For learning tasks, we focused on having students look closely at a technology to decipher its positive, negative, and unexpected results, and creating their own sustainable piece of technology.

Photo Credit: Aaron Kaio
Students struggle to imitate a geothermal system at a workshop by the Wisconsin Institute for Discovery. 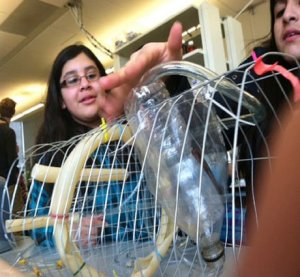 Photo Credit: Aaron Kaio
Students struggle to imitate a geothermal system at a workshop by the Wisconsin Institute for Discovery.
Rifles and Windmills

First, I decided to take advantage of some excellent opportunities offered by the nearby University of Wisconsin. For practically no cost, they offer student workshops at their teaching lab. So I signed us up for cow eyeball dissection, geothermal engineering, raspberry solar cells, and aquaponics. For each lab, I designed a pre- and post-activity that included close reading. My favorite was a mini-debate between students who supported geothermal energy and those who didn't. The geothermal supporters received an article describing the benefits of geothermal in California, while the negative side was given an article about geyser deaths in Yosemite. During the final reflection, the students decided it was a ridiculous comparison, which I absolutely agreed with, but loved that they had to understand the benefits and workings of this sustainable technology to say that.

Second, for U.S. history content, I struck thematic unit gold when I chose the breech-loading rifle as our focus. This invention by John Hall may seem like a standard piece of technology, yet it is actually a gateway to several interesting topics around technology. It allowed me to discuss patents, because when Hall went to register his patent, he was forced to add a co-inventor's name -- the gentleman who happened to run the U.S. patent office. Also, Hall had to invent several machines and a new process for assembling interchangeable parts in order to build the breech-loader (this would later become the assembly line). My favorite connection was that John Brown raided the Harper's Ferry arsenal in order to steal thousands of breech-loaders for his war on slavery. Each connection provided a discussion on other more interesting topics than the breech-loader, and they all became examples of the good, bad, and unexpected consequences of a new technology.

Finally, I was able to provide several hands-on lessons around electricity. This included making circuits on springboards and with Play-Doh (a project that one of my colleagues found on TED). This was reinforced at the UW workshop for learning about and sustainably making solar cells that used raspberry juice as the negative charge. Once we had the basics of electricity down, we turned to learning how wind turbines worked using parts of the comprehensive KidWind curriculum. This included learning about generators and propeller blades. Later, students used the contents of my junk drawer to create working windmills designed to lift a small weight when my house fan provided gale-force winds. These lessons were the most fun of the quarter and really pushed the students to act like engineers by trying something and then going back to the drawing board when it didn't work.

However, let us get back to our question about the gramophone or the cylinder lock. This was the topic of the final presentation of our culminating exhibition on technology. The culmination was a presentation day where every kid was responsible for presenting on two topics that we had worked on in the unit. For example, a student might present a piece of sustainable technology and debate about the historical impacts of another piece of technology.

By random draw, my student representing the gramophone was debating against the student who chose the cylinder lock. Both laid out the basic historical data for each invention. Also, they discussed how the circumstances of the Industrial Age provided the materials and technology to create such unique inventions. Furthermore, they both discussed the Gilded Age as providing the desire and wealth to own such inventions. And they both gave solid arguments as to the invention's connections to today's technology: iPods and Internet security.

In the end, the cylinder lock won the debate because it was a quirky invention used every day that works in an ingenious way appreciated by the kids who voted. Also, throughout the unit, students practiced their reading, researching, writing, and speaking skills. The hands-on lessons provided engagement, and the culminating exhibit pushed kids to really work for something they were proud to present. Everything that happened in the unit seemed to work -- and students learned.

However, my favorite piece came during a mini-lesson that included a TED talk on a 50-cent microscope. The microscopes can be used to quickly identify malaria rather than waiting several days for lab results from offsite. After the talk, we discussed how technology should be used in the future, and the students started debating the idea whether its goal should be making money or helping people. During the debate, students used several ideas from the unit, discussed sustainability, climate change, the unpredictability of technology, and the value of entertainment. These weren't necessarily things that would score well on a standard test about technology, nor even ideas that I had expected, but rather they were adult topics that my generation really hasn't figured out.

Had we done a standard history unit and a standard electricity unit, I doubt we would have had a discussion like this. The messiness of turning this into a collaborative project-based unit caused the kids' brains to look for more connections than we had expected. Yes, they did the standard learning, but they also learned something more: the idea that technology becomes more complex with each generation as problems mount and solutions struggle to keep pace. In the future, we will need complex and creative thinkers that project-based curriculums encourage.

Have your project-based units delivered any surprising results? Please tell us about it.