When I was an elementary and middle level history teacher, my students investigated worldwide human patterns and variety. They examined how shadows of the past stretch across the present, influencing ideas about what it means to be human and to live humanely in a community. In the process, I noticed that early adolescents started with some surprising misconceptions about human intelligence, innovation and agency, especially in the most distant reaches of the human past. These misconceptions present challenges for preservice teachers in my middle level methods course, especially when they teach the deep past -- the period for which we lack written documentation.

The first challenge in teaching any aspect of the deep past is the most obvious. Because objects, rather than traditional written documentation, provide the primary evidence of ancient people's ingenuity and agency, teachers need to help students "read" objects. A second challenge relates to early adolescents' tendency to assume a lack of intelligence on the part of distant ancestors and to ascribe innovation, when it occurs, to the efforts of exceptional individuals. Because such assumptions ill prepare students to understand the constraints on human choice and the power of collective action, teachers need to teach against these misconceptions.

Combating the Overemphasis on Individual Agency with Chaîne Opératoire

Preservice teachers in my middle level methods class often overemphasize individual agency in much the same way as do younger students, and to similar effect. To counteract this tendency, I adapted the archaeological concept of chaîne opératoire to emphasize the connections among human intelligence, innovation and, especially, collective agency. Chaîne opératoire refers to the sequence of operations that lead from available resources, attention to prior innovations, and evidence of cultural practices in art, design and the use of a tool, to an invention or innovation. Imagine, for instance, a pump drill -- a prehistoric device designed to drill through wood, shell and stone (see the photo at the top of this post). What tools, resources and prior inventions made the pump drill possible? What skills and cultural practices influenced its manufacture and use?

When a colleague and I introduced chaîne opératoire to a group of fifth graders who were investigating ancient tools, the students easily listed resources and prior inventions, and then quickly considered related human intelligence, the need for teachers, and dispositions like determination and patience. As one girl explained, "People back then had to think, think, think . . . they had to be like Einstein." This intellectual tipping point was relatively easy to achieve, but required instructional intervention.

Each caption read: "This object is historically significant because . . . ?" Thus, the methods students could not say that an invention wasn't significant. Duncan and Sophie wrote that the flush toilet is significant because it altered the way homes were designed, improved home sanitation, and led to the development of septic systems and water treatment plants.

The preservice teachers briefly described the problem each technology was meant to address: cooling hot spaces, slinging a spear with killing force from a safer distance, and so forth.

The whole class created a chaîne opératoire -- a diagram of resources, prior inventions and skills required to make and use the pictured object that resembled a sentence diagram (click the image below to see an example). The follow-up discussion paralleled the fifth graders' conversation by calling attention to: 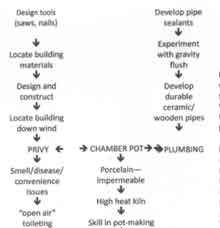 After pairing an ancient and modern tool (i.e. a cooking pit and a microwave), new groups of four students compared knowledge and skills required to make and use the objects in their assigned pictures. Like the fifth graders, the group comparing the microwave oven and cooking pit discussed the difference between ease of use and ease of construction. As an example, the microwave required more (and increasingly distant) people and systems for construction, but required little skill for individual use, while the cooking pit required more time and skill during use, but could be constructed quickly by a single individual.

The chaîne opératoire is one of several tasks that preservice teachers adapted for their field placements. Their analysis of student responses and subsequent presentation to peers allowed me to assess their grasp of differential human agency -- collective and individual -- exhibited in their own instruction. Institutional agency in relation to modern innovations is a lens that we explore more fully when studying more complex societies.

The Individual and the Group

In assessing their own experience with chaîne opératoire, my preservice teachers reported becoming more intentional as they planned lessons that helped their students understand the ways in which individual agency has always been constrained and/or supported by collective and institutional agency, as well as individual agency. Further, my methods students learned that we are all constrained by societal norms, accumulated knowledge, laws and the like -- and that negotiating these constraints for the common good is a basic survival skill in a democracy.