Summer is here -- a great time to get out, explore nature, and have a little family science fun. Here are my top three super-simple science demonstrations that mix the wow factor of any good science demo with some nice science exploration.

Blobs in a Bottle

Molecules of water and oil are built differently. Water is attracted to water, but it pushes away from oil because of invisible forces in its atoms. Because of that, water and oil do not mix. That's the intermolecular polarity part. The water is also denser, so it floats to the bottom of the bottle. Fizzing tablets do the job of carrying the water to the surface to make our lava lamp blobs. Far out!

No pop? Experiment again with more of each ingredient.

Anyone can tell you that a gas takes up more space than a liquid or solid, but proving that fact by inflating a sandwich bag beyond its limits might do a better job of getting the idea across. 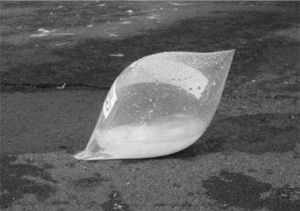 Remember when film used to come in rolls? Back then, we discovered that you could turn a film canister into a really simple and impressive fizz-powered, Newton's-Law-demonstrating, high-flying rocket. It is still one of my favorite demonstrations, and perfect for a warm summer afternoon.

Safety note: If it does not launch, wait at least 30 second before examining the canister. Usually the cap is not on tightly enough and the buildup of gas has leaked out. Never stand or look over a canister that has not launched.

What does it demonstrate? Newton’s third law ("A force is a push or a pull that acts upon an object as a results of its interaction with another object.") and that science is awesome! Happy summer exploring!

What science experiments do you try when the kids are home over summer break?