When my sixth grader Lyle asked if we could build a roller coaster in the backyard, I said yes -- for two reasons. First, as a dad, it's my job to help my kids do what they want to do. I believe that what kids want and what kids need are usually the same thing. So I've trained myself to listen to their ideas. I look for reasons to say yes, and I look for ways to engage and play with them. Like every dad, I know that my kids are my best chance at changing the world for the better. Second, I knew that a project this crazy-fun would surely keep the kids' attention, and that there would be fantastic learning opportunities in subjects like math, physics, construction, safety, research, collaboration, and (as it turned out) even media.

Believe it or not, the particulars of how to build a roller coaster are pretty straightforward. We sunk 4x4's into concrete as the upright posts, used 2x4's as the "ties" and "stringers," bought 1½ inch PVC pipe for the rails, and chose 3½ inch deck screws to hold it all together. Doing the Math to Figure Out How Much of Those Things We’d Need was Lesson One.

"Math? For fun?" you might ask. You bet. Because it's fun to have a roller coaster in the back yard. It's even fun to talk and dream about it as a thought experiment. Either way, the first thing you need to do is figure out how much cement, lumber, PVC, and screws you’ll need to make it happen. One hundred eighty feet of track, two PVC rails, one 14-inch tie every foot, six screws per tie, and so on. Right away, I discovered that just about any kid will jump at the chance to solve a word problem that starts out, "You are building a roller coaster in your backyard, and you need some materials . . ." If there's a roller coaster at the other end of a word problem, your kid will do the math. I promise.

The backyard roller coaster didn't just change our backyard. It changed the whole neighborhood. In no time, there were half a dozen neighborhood kids and at least that many grownups stopping by the backyard on a daily basis to check our progress, offer opinions and advice, help dig post holes, haul bits and pieces, and generally be a part of it all. Grownups call this collaboration, I'm told. At my house, we call it sharing, helping, and fun. The funny thing about sharing, helping, and fun is that people like to help. Too often, we don't want to impose on friends or neighbors. So we deny those around us the opportunity to contribute.

The roller coaster project helped our family get over that preconception in a hurry. We needed tools, which my neighbors were happy to lend. We needed extra sets of hands, which the kids were thrilled to provide. We needed advice and suggestions. Lesson Two was this: Ask For Help. Share Your Project. Include Anyone Who's Interested.

Just before Halloween last year, about six weeks after we started, our roller coaster was finished. The kids named it "The Caution Zone," because there was never a time they visited the backyard without enduring a cautionary lecture of one kind or another from me. "Safety Talks," as they called them, were always expressed in physics terms. When we talked about the need to stay clear of the track when the coaster was being used, we talked about how force equals mass times acceleration. I explained to my kids, who subsequently explained to others, that an object at rest (your arm, for example) would remain at rest unless it was acted upon by an external force (a roller coaster cart, for example). The kids would howl with laughter when I told them how Newton's Laws of Motion could just as easily be called Newton's Laws of How Not to Get Knocked on Your Butt.

Why did Jonah's coaster ride always take less time than Lyle's? Great question! So we figured it out. We learned that it takes energy to move a coaster cart, and we talked about the relationship between potential and kinetic energy. We figured out that Jonah started his rides with more potential energy than Lyle did, because potential energy is made up of mass, height, and gravity. Jonah had more mass, giving him a more energetic ride. And there we have Lesson Three: Introduction To Newtonian Physics. 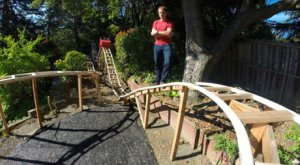 Photo Credit: Will Pemble
CoasterDad surveys his handiwork.
Roller Coaster Middle School, as Lyle calls it, has just opened its doors. Our classroom is worldwide, and there is no end in sight. We're now taking regular field trips to amusement parks, go kart race tracks, indoor skydiving facilities, and science museums to learn more about physics, family and fun. We're sharing those adventures at coasterdad.com and on our YouTube channel.

It all started because my son asked if we could build a roller coaster in the backyard, and I said yes. And if you ever started a PBL project that took on a life of its own, we'd love to hear about it!