I am an Oakland resident, an Oakland educator, and the mother of an Oakland public school student. I am committed to transforming our schools and world, and I work hard at maintaining hope and faith that this can be done.

Occupy Oakland and the general strike that this movement initiated on November 2, are tremendously inspiring. This is a moment brimming with possibility, potential, and learning opportunities.

Occupy Oakland has been criticized for not having leaders, for being unorganized, for being unfocused. Over the last couple of weeks, I have seen people dialoguing, disagreeing, listening to each other, challenging each other, coming to agreements, and agreeing to disagree. Maybe this is what democracy looks like. It does make me a little uncomfortable; I have become accustomed to order, outcomes, and agendas. Maybe it's okay to feel uncomfortable.

The focus of this movement is the grossly distorted distribution of wealth in our country: that one percent of the population controls 40 percent of the wealth. It's finally okay to say that is wrong -- that the extremely rich should pay more taxes. That banks should not be bailed out and then make record profits a year later. This is just wrong.

And leaders? The absence of identified, charismatic leaders gives me hope. It allows us all to be leaders. "Strong people don't need strong leaders," said the civil rights activist Ella Baker. Let's explore a new model of change and leadership.

And by the way, 99 percent of the protestors have been completely peaceful, although the media has devoted more than 50 percent of its coverage to the one percent who haven't been.

Last week, in this post, I fantasized about school transformation, I indulged in "dreaming big." I am very clear that the only obstacle to realizing this vision is money and I don't mean a three-year grant to "turn around" a school, I mean a long-term commitment to funding schools. As long as we have the current funding structure in place, we cannot make significant change in our schools. We need real change in our tax codes, in how our federal government spends money, and in our state's budget priorities. How can it be that California spends $200,000 per year incarcerating a kid, but only $6,500 if he's in school?

Let's insist on having this conversation.

No Child Left Behind has perhaps been the biggest distraction from the issue of wealth inequality and underfunded schools. Complying with the mandates of NCLB has destroyed the soul of our schools and the spirits of too many teachers and students. Testing-mania has sucked the life (the art, literature, music, science, creative writing, inquiry, conceptual math, debate, and so much more) out of too many of our classrooms. It has got to end.

Test scores are a reflection of the socio-economic status of a community. Testing doesn't end poverty; it has become a way to blame teachers and principals for poverty. Let's point the finger where it needs to be pointed -- at how our schools are funded, at the inequality of wealth, at our tax structure, at the acceptance of bailing out banks.

This issue must be the epicenter for a resistance movement in our schools. There have been plenty of attempts by well-intentioned, brilliant, hard working folks who have lobbied, written, spoken, and advocated for a change in education policy. I'm grateful to writers such as Diane Ravitch for clarifying these issues so well. And now those of us in the streets and in the schools need to take a stand.

There are consequences for individual schools, teachers, or students who don't participate in testing. But what if an entire school or district boycotted this practice? What would it look like to incorporate some of the democratic, humorous, collaborative approaches that are being used by the Occupy movement and bring them into our schools? How about some kind of mass creative, civil disobedience in the spring during testing season?

What I appreciate most about the Occupy movement is that it is putting the issue of wealth inequality unapologetically front and center; it is this issue more than any others that impacts our schools. I haven't heard such clarity in a long time. There is a great opening right now, a great possibility for us to hone in on the insane lack of funding to schools and to demand a change. Let's take it.

Credit: Elena Aguilar
Creating one of the many posters. 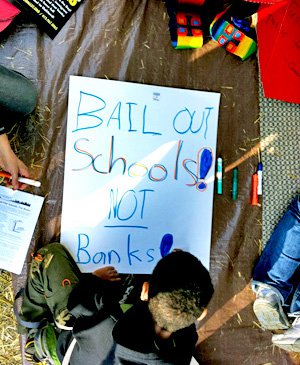 Credit: Elena Aguilar
Creating one of the many posters.

Reflections from a seven-year-old boy . . .

My son spent the entire day at the strike. He hung out in the "Children's Village" playing with legos, listened to speeches and music, and then joined thousands at the Port of Oakland.

As we drove home in the evening, I asked him what he'd learned that day. "That when I'm in high school, I'll learn about this protest," he said.

I asked him to clarify.

"This was so important that it's going to be in history," he explained.

The Occupy Movement offers an opportunity for us to inspire our youth, help them build the skills to take up this work, and think about change in a new way.