Why is it that sometimes we only see the extremes in our work? Picture your strongest lessons, activities, and projects juxtaposed against ones that just didn't work, and that's how it's been so far with our Digital Shop capstone projects. Some experiences make me want to high-five the entire class all at once. Others deserve an epic facepalm. As of this writing, we still have a month of school left. How will the remaining capstones go? What have we learned in the process? Can we "fail up" and finish strong, sending kids into summer vacation with school-year memories that will last forever?

As I explained in my April post, I wanted the capstone projects to:

The results have been mixed, as this post will illustrate.

When Jake’s mom messaged me on Facebook about the difficulties her son was having while playing helmet-required sports like street hockey and T-ball, I was excited that our kids might be able to help. But soon after the capstones began, reality set in. Though brilliant and inspired, these fifth-grade kids had limited time, limited resources, and no real scientific basis for understanding what causes feedback and how to ameliorate it. But armed with knowledge from our interview of Jake and his mom, plus some empathy mapping, kids got to work with our donated hockey helmets, their design journals, and a ton of craft supplies. They quickly identified and iterated multiple variations of a few basic themes:

These are all great ideas, and some of the prototypes got a bit whimsical and off track. We had cardboard helmets, hearing aids made from modeling clay, and even models of Jake. 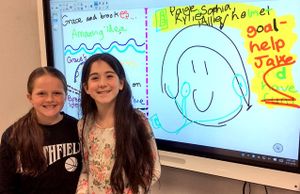 When we'd made enough progress, we brought Jake himself up for some testing:

Somehow, the design above resulted in reduced feedback -- almost none, in fact. More testing is needed, of course. But in the end, while we had some solid ideas and inspired prototypes, solutions were limited by the kids' limited understanding of acoustics and the small number of donated helmets available. Some teams required constant redirection and refocusing when their ideas didn’t pan out or when they couldn't come up with any. We also had more problems than expected with team dynamics. I need to do a better job supporting teams throughout the creative process and come up with optimal groupings before class starts.

Grade 6: Helping Miss Cindy Get Around School Every Day

Miss Cindy is a part-time occupational and physical therapist in our district. She works two days a week with K-8 students and uses a wheelchair, and sometimes a cane and her assist dog, Sugar, to transport herself and a variety of materials to and from her workspace and classrooms. Getting through the school doors each morning requires assistance (holding open and also traversing the slightly-raised threshold.) Our sixth-grade challenge: make it easier for Miss Cindy to get around. 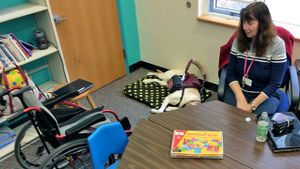 Our kids have so far done a terrific job identifying and prototyping possible solutions. We've seen a variety of bags that mount on a wheelchair or her service dog, and powered front wheels or trailers for wheelchairs. Overall, the sixth grade has generated our most focused results, including the impressive story of a failed design and a pivot.

These designers had initially tackled the angled metal threshold that impedes Miss Cindy’s progress through the door every day. That slight incline is just enough to catch her front wheels and require extra "oomph" to cross, which is difficult when entering the building with hands full.

The team's first idea was modifying the threshold to reduce the angle. Their attempt to 3D design and print a 100-percent-scale working model proved too difficult to size properly, so they moved on to cardboard. After taking careful measurements and attempting to place the device, they determined it wasn’t practical and abandoned the idea. But instead of simply giving up (they had nothing to lose in an ungraded class), they brainstormed the most obvious, viable, and effective idea yet: automatic doors. And, since they lack expertise and resources to make one on their own, they decided to plan a fundraiser to help pay for it. Genius!

I've never been so excited about a failed project idea, and I made sure that this team knew it. This is a great example of a pivot, as defined by Eric Ries: "a structured course correction designed to test a new fundamental hypothesis about the product, strategy, and engine of growth." These students could have given up in frustration, kept trying prototype after prototype, or argued among themselves without finding a solution. Instead, they found a new solution and immediately started planning to make it happen!

After speaking with our superintendent about this idea, we're now working with these students on a presentation to the school board, along with ideas for their own fundraiser to help offset the cost. I think it's awesome they didn’t just assume that the school would pay for the doors. They're actively and personally committed to the project because they genuinely want to help. They’re passionate, not passive, and they own their solution. Does it get any better than this?

Our seventh-grade students have the incredible opportunity to work with a team of medical professionals from Thomas Jefferson University Hospital in response to the provocation, "How might we make the hospital experience less scary for kids?" Dr. Robert Pugliese has tirelessly orchestrated an array of resources, people, schedules, and connections to provide our kids an opportunity for a true, honest, authentic exercise in real-world entrepreneurship.

And they've risen beautifully to the challenge. Among the human-centered design solutions they’re dreaming up:

Here's where it gets better. Each design team is using the Google Slides pitch template to present their ideas in a Shark-Tank-style Google Hangout, which is recorded and then shared for scoring by the team at Jefferson. The top three teams will be feted at Jefferson University Hospital on June 20th, where they will learn how, over the summer, their ideas will be developed and actually put into production at the hospital. How cool is that for seventh-grade kids? (Or for anyone, really?)

We started the school year by telling these kids that they could change the world -- and we meant it. In the case of our eighth grade class, that would be six worlds. Thanks to their efforts, six children from around the world will receive 3D-printed prosthetic hands. We'd originally planned to deliver about 26, but a number of logistical and technical complications reduced the number of people we could help. But we pressed on, and here's what we’ve learned from this process:


Our first two weeks have generated nearly one complete set of hands for our six recipients. We expect to complete them this week and immediately start on our second set (each recipient is getting a spare). We're fabricating some extras, like a "hand stand" and ready-to-color, movable Minecraft figures, to ship with the devices, along with hand-drawn greeting cards. Can't wait to get them to these deserving youngsters!

It's hard to believe that the school year is almost over -- and even harder to believe all that we've accomplished, what we've tried, how we've failed, what we've learned, and what it all means for our students, our school, our community and the world. We set out to bring back shop class, with projects oriented around community needs. Thanks to Edutopia, we've been able to tell the story month by month. We've also documented it on my classroom blog, on Twitter with the hashtag #NCSDigitalShop, and in pictures on Flickr. It’s been an unbelievable year of learning at our middle school, a year like no other -- the best of times, the worst of times, and everything in between. We’ve learned design by doing design, making whimsical fantasy prototypes and, perhaps, some real products. In the end, what we've done most effectively is create an environment where kids can really shine. Not for a grade or any sort of recognition. For themselves. For their future. For ours.

Thanks for reading throughout the year, and have a great summer!