Ah, writing workshop in the classroom: so many ideas, so very little time! How do we meet curricular and pacing mandates yet also give our students plenty of opportunities to write with abandonment, to write with fire?

Since I am a Fellow of the National Writing Project, I believe in writing side-by-side with students; I believe in providing young writers with choice; I believe it is fundamental to honor their own stories, encouraging them to write often and passionately so as to develop their voice. Developing their voice, their own song, will influence their academic writing as well. 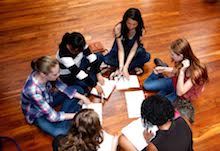 Photo credit: Write Girl
One non-profit after-school program known as WriteGirl lives by such a philosophy. Serving more than 350 teenage girls (ages 13 to 18) in metropolitan Los Angeles, WriteGirl describes its program as taking an intensive approach to creative writing education that focuses on "creativity, critical thinking, and leadership skills to empower teen girls." Many of the girls attend overcrowded and underfunded urban public schools. And especially notable, most of the girls go on to enroll in college -- an impressive statistic in contrast to the 66 percent high school graduation rate in Los Angeles Unified School District.

So what's the secret sauce? Let's hear from some of the participants:

Because of WriteGirl, I can write. It might sound silly -- because obviously this is WriteGirl -- but it's never been silly to me. Growing up with dyslexia meant that my writing was always less eloquent and less readable than everyone else's. I grew up not trusting my writing, not trusting my words, and, eventually, not even trusting my own voice. Society taught me my voice was unimportant because I was a girl and my learning disability taught me to silence that voice completely. It wasn't until I joined WriteGirl that someone taught me to speak up.

At the first workshop, my parents had to drag me out of the car --I was terrified of speaking up, of letting anyone know that I had a voice, in case it would be crushed again. And then I walked inside. Women -- women with pink hair and big smiles and crazy clothes, women who were wearing and saying whatever they wanted -- greeted me as I passed by. For the next two years I was encouraged, mentored and built up.

By the time I turned sixteen, several of the pieces I'd written at WriteGirl were published. I admired the mentors -- strong, independent writers, actors, and businesswomen -- so much that I wasn't afraid to speak up anymore. I wrote what I believed in. WriteGirl gave me a voice and the confidence to use it, and I will always be grateful for that gift.

When I joined WriteGirl, I finally discovered a home and a family. Suddenly I had mothers and sisters to help me reach my highest potential. Because of the remarkable women in WriteGirl, I know that being a young female writer doesn't have to be a silent act, clutching your pencil in a corner and softly writing the words you are too scared to utter. These women have taught me that being a young female writer is an act of voice -- loud, courageous, compassionate, and that my words shouldn't be written on a page just to stay there.

A few months ago I was selected to go to the United Nations Headquarters in New York City as a youth delegate, to work with representatives for the advancement of women and girls all over the world. Although it was intimidating to be the youngest person there, my WriteGirl mentor was there every step of the way. She believed in me so much that soon I did, too. Without this message of strength, I also wouldn't have had the courage to become the first ever LA Youth Poet Laureate. [Amanda is featured in the top photo, reciting one of her poems.]

I now hope to learn how to combine my desire to write with my interest in social change and advocacy. And I don't just want to grow those two things in myself, but also inspire those same principles in other people, and cultivate those same passions in other kids -- and adults too, if I may.

Before I joined WriteGirl, I was the quiet girl, the one who never felt comfortable saying her opinions aloud. I kept it all inside. At first I didn't want to open up to my mentor, Katie. I was scared she wouldn't understand. After several workshops and one-on-one meetings at a cafe, I told her about everything that I didn't have the guts to tell to others: that I wanted to be a journalist, be the editor-in-chief of my school newspaper, maybe even go to college out of state. She dedicated her time to helping me see broader possibilities for my future than I had ever seen before. Before I knew it, I found myself reading a poem to a small crowd at a bookstore, then to a larger crowd of hundreds at a WriteGirl workshop.

In my junior year, I was chosen to represent WriteGirl and travel to the White House to accept the National Arts and Humanities Award from Michelle Obama. The thought of being center stage meeting the first lady in front of reporters and TV cameras made me so nervous that I felt sick. But my mentor coached me through my fear and by the time I walked on that stage, I felt more confident than I ever had before. The first lady embraced me in a hug and encouraged me to set ambitious goals. She said she loved to write and told me to never stop writing. That day, I promised her and myself that I wouldn't.

How do you do this? What are ways you apprentice and inspire the young writers you teach? Share with us in the comments section below.